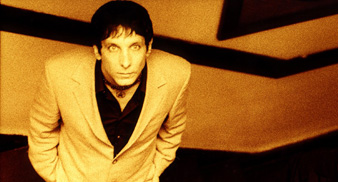 UNCUT: What difference did it make working in your own studio for the first time?

JONATHAN DONAHUE: “It worked out really charming in the beginning, like, ‘Hey, this is kind of a 9-to-5 job, like going to work’. And then you realise, ‘Shit, I gotta go back to work!’ It’s a place where we can sort of bounce ideas literally off the walls without spending $12,000. It has this pegboard stuff on the walls that they had at the original Sun studio, and we kept getting these really good drum sounds there because the pegboard creates a natural compression.”

How has the Mercury Rev sound evolved on The Secret Migration?
“There’s a lot less strings, or at least they’re a lot less overt, like “Here comes the orchestra”. And that was something on our part that was sort of upon us from the beginning. It was like, “Let’s do what we can with some other kinds of texture and not just fly in the oboes from Austria…” Everyone has their crutches, so that was something we worked on a bit.”

Nature is all over the album. It must be hard to live in the Catskills and not be influenced by the changing seasons.
“I was noticing the changes outside, but I just didn’t have the wherewithal or the composure to look inside right then and say, I guess it’s coming from within. Something within me was moving and changing, or trying to – doing the best that any artist can do, reflect against themselves and see what sort of falls away as something of an illusion.”

The album is less disturbing than All Is Dream – more like a magical Peter Pan ride through forests and wildernesses.
“What I thought was going into All Is Dream was nothing like what came out of it. I understand now in hindsight that it really tweaked some people in a way that I wasn’t conscious of. I had thought it was going to be something quite pastoral and serene.”

Will you ever make a truly pastoral and serene record?
“This one was that one! This one was supposed to be an insular, piano-based, 2 am record, and somewhere along the line people started playing drums on it and my idea sorta flew out the window like a horsefly.”

Is it significant that “Moving On” – with its mantra-like hope that “it will be better in the sun” – follows the remorseful “My Love”?
“A lot of us at that time were going through some pretty heavy stuff. It was basically the last optimistic life-preserver on the ship at that moment. It’s been one of those periods for us. “My Love” was born of a particular sorrow, and “Moving On” probably has a lot to do with not getting too worked up about the guilt and about the regret that “My Love” brought to the surface.”

Is this funny little plan working out after all?
“Yes, we’re living all in one moment, and the moment is now.”

This interview, along with a review of Mercury Rev’s new album, ‘The Secret Migration’, features in Uncut Take 92, January 2005. Out now.