Uncut.co.uk talk with Chicago based percussionist Glenn Kotche about his solo career, Wilco and more... 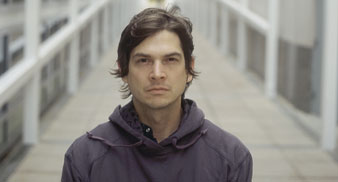 Chicago based percussionist Glenn Kotche, better known as long-time drummer/percussionist with Wilco, one-third of experimental rock-trio Loose Fur and half of Jazz duo On Fillmore, releases his third solo exploration, the album ‘Mobile’, this week.

In this interview with Uncut.co.uk Glenn Kotche unveils all about the album, Wilco, and what the future holds.


Uncut.co.uk: Tell us about your new album, ‘Mobile’?

Glenn: “Basically when I make a solo record I have certain rhythmic ideas that I want explored. It doesn’t start out as, ‘Oh, I’ll make a solo record’, it starts out with nagging questions. I was touring so much with Wilco, writing in hotel rooms and on tour buses, looking at certain things that I’m not able to explore on a drum set alone. Its kind of an extension of my drumming and this particular record had three or four concepts that I was really interested in. It’s kind of stylistically all over the place but there are rhythmic concepts grounded underneath the surface for me, all played on various percussion instruments.”

Uncut.co.uk: Tell us about those instruments. Some of them are pretty weird…

Glenn: “I’m more interested in using sounds like the almglocken and other instruments that I was exposed to in college and love. ‘Monkey Chant’ was based on a portion of the Ramayana – the epic Hindu story and was inspired by some of the original, field recordings of the vocal chant from the last century. I assigned different sounds to the characters from the story. I had this prepared snare drum that I’d developed years ago and this seemed like the perfect opportunity to utilise it. It has various springs, cables and sticks going through the actual snare drum head with contact mikes on the drums so the small, really unusual sounds get amplified and interact with the rest of the kick.”

Uncut.co.uk: How does working solo differ from working with Wilco?

Glenn: “Well, it’s all about rhythm and drumming. A solo record is a way for me to explore some of the loftier, more abstract concepts that I’m interested in. With Wilco, for me, the most important thing happening at any time are Jeff’s lyrics. It’s about conveying those lyrics, putting them in an interesting light. What I do in there is dictated by that and I don’t think it would be appropriate to necessarily do my rhythmic explorations over that, even though I have a great bit of leyway. They all provide a balance and it helps me grow as a musician. What I learn doing a solo show in a solo setting, I bring to Wilco.

Uncut.co.uk: Side projects such as Loose Fur, On Fillmore and Autumn Defence etc must help Wilco stay fresh as a band…

Glenn: “Exactly, I think it keeps us more focused when we come back to Wilco. Everything is done for the purpose of the better of the whole, instead of people trying to show off. Everyone has other outlets for expressing themselves, that’s one thing I love about Wilco. This month alone Mike played a solo show, Jeff played a solo show, I’ve been doing solo shows, Nels and Pat and John have their band, Autumn Defence, doing shows and that’s pretty cool. I think my band mates are incredibly talented and I really respect them. It’s so cool they’re able to do that.”


Uncut.co.uk: Is Wilco a democracy or is Jeff the leader?

Glenn: “It’s both. Jeff, he writes all the lyrics so there’s no question in my mind that he is the leader, he started this band. I’m one of the elder statesmen now at five and a half years, I’m not about to pretend that it’s my band when it already existed for years before, but when we’re actually making music together and are onstage it’s very collaborative. Jeff sometimes will come in with a finished song, but as the drummer what I get to do is always open to what I feel and like. Collectively where there is no idea so we just start playing in a room, it’s really a free situation. A lot of people on the outside tend to think Jeff’s, you know, a really strict, dictator type of guy trying to get his art across but its not like that.”


Uncut.co.uk: Tell us about Loose Fur – you’ve got an album coming out…?


Glenn: “Loose Fur is a side project in every aspect of the term. We’ve only played three shows in six years, this is our second record and it was recorded maybe over the course of nine months or a year, with the total amount of recording time being only a week and a half or two weeks. It’s a completely collaborative situation, everything on the record was written together and it’s a really nice progression from the first record. I met Jeff and got into Wilco through Jim, I played on Jim’s solo record, to be able to play with both of them is just something cool. I’m very happy to be able to make music with Jeff outside of Wilco where there’s maybe a little less pressure, a little less responsibility or expectation, where it’s a fun game. It’s three friends getting together and hanging out…”


Uncut.co.uk: What has been the highlight of your career so far?


Glenn: “The highlight, honestly, is the musical gratification I get from playing with these guys, making these records, and being able to grow as a musician. That’s the reason why we’re doing it, we don’t make a record to sell a million copies. I didn’t make ‘Mobile’ because I thought it was going to be a huge hit, I made it because it was something I felt I needed to express. As far as the more superficial aspects go I’ve been able to meet some of my heroes and I’ve got to play some amazing shows. When The Flaming Lips opened for us at Madison Square Gardens it was my birthday – we got handed our gold records that same day and then I had 11,000 people singing happy birthday to me. That would probably be close to the top. That night I felt like, OK, something’s going right. I felt very, very fortunate and that’s something I probably won’t forget soon.”


Uncut.co.uk: What does the future hold for you?


Glenn: “Well, I’m just going to talk in terms of music because the future is pretty bleak in the world if you ask me. Especially in the US government…but we won’t get to that (laughter). Wilco are recording a new album that’s quite different from the last record and will probably be out early next year. On Fillmore, are collaborating with Brazilian group Moreno+2/Domenico+2 (they go by both names), they’re brilliant musicians and we’re very excited about that. Solo, I’m looking forward to playing in different settings, letting people hear this music and gauging their reaction. If I have more nagging rhythmic questions I’d like to make another solo record but, for me, it’s pretty important to have a reason to do it. I feel really lucky to be musically satisfied in all these different projects so I’d love for all of them to continue. So far so good…!