The man Jerry Garcia appointed as the Dead's official historian - on the inside story behind The Grateful Dead Movie... 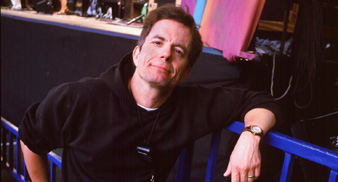 UNCUT: Why did the Dead announce their retirement from the road?
McNALLY: They’d run out of creative gas on the summer ’74 tour. When they got back home, they called a company meeting. Bob Weir said there were two problems – cocaine and a crew that seemed to him to be drowning in mountains of blow. So they called a halt. To Weir, the hiatus was never meant to be permanent, But everybody wanted time off. Garcia gave an interview to Melody Maker around the same time saying that the most rewarding experience for him was to play in bars and not have the pressure of being Jerry Garcia of the Grateful Dead.

So were the October ’74 gigs featured in the film planned as a genuine farewell?
Nobody knew. They might easily have been the band’s final performances. The future was uncertain.

Where did the idea to document the occasion come from?
There had been talk of a movie since Spring. Garcia’s secret dream was to be an auteur film-maker, but it was by no means a unanimously popular idea. Phil Lesh called it ‘Jerry’s jerk-off’ and the film ate money. A total of 46 people in four different crews were hired to film four nights. The budget was originally 125,000 dollars and it ended up costing 600,000 dollars.

Did the nature of the film change much during the editing process?
Originally, Garcia had thought of the film as a canned concert, but as he watched the footage he began to see a real movie. His years of movie-watching had given him the gift of seeing rhythm and flow in the film.

Why did the film take three years to come out?
There was no director. After the shows, Garcia sat down with 125 hours of raw footage, which he matched to the soundtrack and catalogued. By late ’76 he was purchasing books of airline commuter tickets and flying daily to Burbank Studios to mix the soundtrack, inventing new technologies like ‘phase panning’ so that the sound of the film would subtly follow the camera. Ironically, the film that followed them into Burbank Studios was Star Wars.

It’s been said making the film took a real toll on Garcia…
The grinding stress of editing was a shock to him. He had the type of photography he wanted but what he didn’t anticipate was the sheer tedium of the film-making process. Even more stressful was the tap dance he had to go through to finance it. He was using band money for his own project, and it ate him up. By the time he’d finished, he’d discovered heroin, with predictably horrific effects. But in the short term, his pain went away his doubts were stilled and he was able to finish the movie.