An interview with David Gilmour 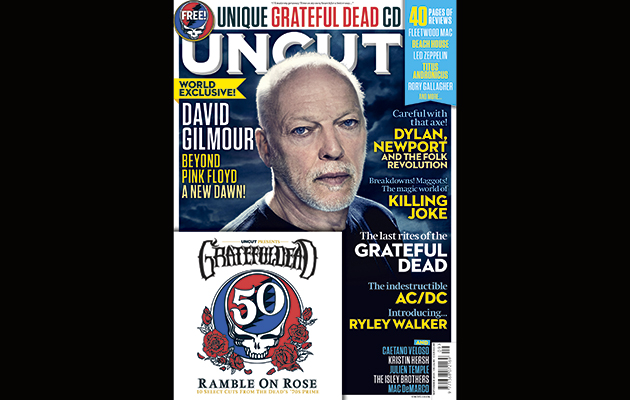 Coming Back To Life
The Endless River has brought the tale of Pink Floyd to a satisfying conclusion, and now David Gilmour can begin a new phase of his career. As he prepares for his first solo album in nine years, however, Gilmour has a different view. Whether “one is or isn’t in a band feels a bit daft when you get to our age,” he tells Uncut, in a world exclusive interview. “It’s part of a continuum.” Join us, then, as Gilmour and his closest allies consider the journey from “Fat Old Sun” to Rattle That Lock – and beyond!

Not for the first time, David Gilmour is considering his future. For almost 50 years now, his decisions as a musician have been directly linked to Pink Floyd. But today Gilmour is readying his new solo album Rattle That Lock; the first record he’s made since calling time on his old band last year. “At what point one decides one is or isn’t in a band – and exactly what the meaning of the word ‘band’ is – feels a bit daft when you gets to our age,” he says. “I don’t think of it like that anyway. It’s part of a continuum. I don’t try and do anything differently. Things just come out different when I’m doing solo records than when I’m doing Pink Floyd. You just accept what comes along, really.”

As if to highlight the intertwined relationship between Gilmour’s work as a solo artist and his career in Pink Floyd, we meet on Astoria, the houseboat-recording studio moored along the Thames that Gilmour has owned since 1986. We are in the studio where the Gilmour-led Pink Floyd convened to work on A Momentary Lapse Of Reason and The Division Bell – but also where Gilmour recorded much of last solo album, On An Island.

A quick glance round the studio identifies a number of items with explicit connections to his past. Behind him, for instance, sits the Martin D-35 acoustic guitar that he first used on “Wish You Were Here”, while grouped in a corner along with his peddle board and a small beige amp rests his fabled black Stratocaster. Even Gilmour’s smartphone, it seems, recently chose to remind him of his celebrated history. “Funnily enough, ‘the iPod angel’ as I call it played ‘Echoes’ from Live In Gdansk the other day,” he reveals. “That’s the first time I’ve listened to it since it came out, I think. You’re going along and your iPod – or now it’s in my iPhone, of course – plays a song at random. It played ‘Echoes’ and I thought, ‘God, that was great fun.’ Do I miss that way of working? I do. But you can’t get back to that sort of equality that one has when one starts out as a young chap in a band. Gradually, over years, the balance of power changes. Your life changes and you become – how does one put it without sounding ridiculous? – bigger and more powerful and some of the people that you work with are too respectful. When you’re young, you can argue and fight and it’s all forgotten the next day. You call people all the names under the sun. ‘No, that’s shite.’ But somehow that equality is really hard to recreate later in life.”

Gilmour’s old friend Robert Wyatt considers the connection between the music Gilmour was making then – during Floyd’s heyday – and the music he’s making now. “The Floyd was more overtly dramatic,” he offers. “The climaxes were more climactic. The wait-for-it bits were more wait-for-it. There’s almost a kind of folk music flow to what David does now. It’s more undulated landscape that mountains and valleys.”

“I think it’s a sigh of relief,” adds Aubrey ‘Po’ Powell, Gilmour and Pink Floyd’s creative director. “You create something larger than life and you’ve got to deal with it on a day to day basis, and that’s what Pink Floyd had become. Doing On An Island was a way for David to get away from that and do something for himself. Rattle That Lock also is an extension of that. But it is a celebration, almost, of everything David’s ever learned musically.”

As Rattle That Lock arrives in a post-Floyd world, it is instructive to look back and consider the reaction Gilmour’s then-bandmates had to his very first solo album – David Gilmour, released in 1978. “Oh, you know,” Gilmour says dryly. “The usual Pink Floyd reaction. Absolute silence.”