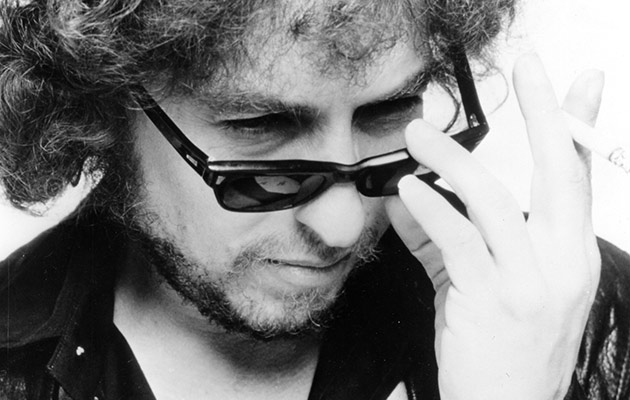 Here’s another producer who gets an unexpected call from Dylan about working on his next album, and of all people it’s New York hip-hop and dance producer, Arthur Baker, best known for his work with Afrika Bambaataa, Rocker’s Revenge and New Order and recent remixes of tracks from Springsteen’s Born In The USA. He meets Dylan in a hotel on Central Park. “I was rung in, and went up,” he recalls. “And, basically, when I went into the room, I walked in the door, and there was no-one there. So I was walking around the suite going, ‘Hello? Hello?’ There were food carts, loads of them, like no-one had cleaned the room for a few days, and a whole bunch of boom-boxes. Then, he appeared and introduced himself to me, and we sat down and started listening to tunes, tapes. He played me a ton of tunes, he just kept playing more and more – and, you know, it’s Bob Dylan sitting there playing you a lot of tunes, and you trying to come up with some good ideas for each of them. A few days later I got a call that he wanted me to work on the record.”

Dylan’s been working on the album Baker will subsequently mix since the end of a grim six-week stadium tour of Europe in the summer of 1984, which includes a show at Wembley Stadium where Eric Clapton and Van Morrison turn up in support and some of the performances later make their way on to the largely drab Real Live LP. Dylan’s since sacked his touring band and because he’s now decided to produce himself, he doesn’t block book recording time, flitting promiscuously from studio to studio in a process that will be even more laborious than the long months it took to assemble Shot Of Love. 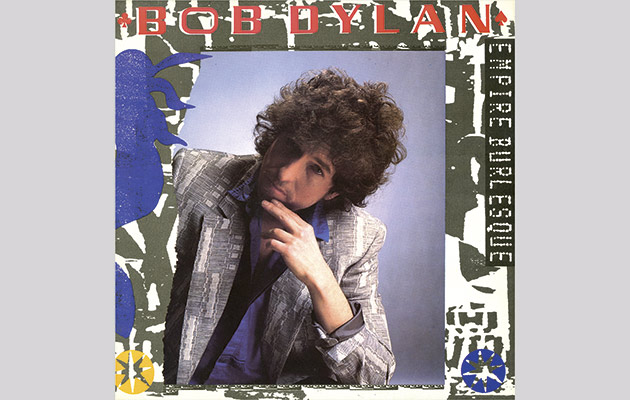 There’s an initial session on July 24, at Intergalactic in New York with Al Green’s band, quickly abandoned. A couple of days later, he’s at Delta Sound Studios with Ronnie Wood and drummer Anton Fig and records a funky thing called “Driftin’ Too Far From Shore” and “Clean Cut Kid”, a song about a Vietnam veteran that Dylan has originally demoed for Infidels. By November, Dylan’s back in LA, where nothing comes of initial sessions at Ocean Way. Moving to Cherokee Studios in Hollywood, however, Dylan cuts a version of a new song he’s co-written with playwright and actor Sam Shepard, an 11-minute epic called “New Danville Girl” that astonishes everyone who hears it, although Dylan will discard it from the finished album. With Benmont Tench, Mike Campbell and Howie Epstein from Tom Petty’s Heartbreakers, he also successfully captures the ominous “Something’s Burning, Baby”, set to a slow marching beat and embellished with menacing synthesiser.

He’s still in LA for the all-star recording of “We Are The World”, America’s response to Band Aid’s “Do They Know It’s Christmas?”. On February 23, he’s at the Power Plant in New York where with Miami Steve Van Zandt and Roy Bittan from the E Street Band he records a sensational version of another powerful new song, the apocalyptic “When The Night Comes Falling From The Sky”. Arthur Baker is in attendance. “It was the very first session I was at,” he recalls. “We listened back to the version they’d cut, and it sounded great – I think Sly & Robbie were playing on it, also. But, Bob said, ‘Ah, you know. It sounds like Springsteen.’ And I said, ‘Well, hey, yeah – you get Van Zandt and Roy Bittan to play on it: it’s gonna sound like Springsteen.’ So he decided to cut another version of it, which is the one that ended up on the record.”

Sessions for what’s eventually titled Empire Burlesque and released on June 10 wraps with the recording of the album’s highlight, a disturbing, forlorn song, written overnight, called “Dark Eyes”, which features only Dylan’s voice and guitar, its simplicity a relief after the musical busy-ness elsewhere on the album on tracks like the irresistibly sizzling “Tight Connection To My Heart (Has Anybody Seen My Love?)”, a re-write of the more obviously personal “Someone’s Got A Hold Of My Heart”. For an album subsequently so denigrated the original reviews of Empire Burlesque are mostly positive although sales are again poor and there is a general regret that Baker has layered the record with electronics, processed drums and lashings of synthesisers. Did Dylan tell him what he wanted the album to sound like?

“No,” Baker says. “In mixing, he just wanted it to be done quick! When we were in the studio mixing at Right Track, we were working on a song, and Bob came in, and he was sitting there, and sort of just expecting it to be done. And I said, ‘Well, it’ll take a while… why don’t you go out, like go to the movies or something?’ So, he went out, he went to the movies, and he came back like, you know, three hours later, and we were still working on the same track. And he’d be saying to us how Blonde On Blonde had been mixed in like two days. And I said, ‘Well, yeah, but we’re working on 48 tracks on some of these now, and that would have been four-track, so you gotta account for that…’ But, you know, I would say maybe Bob wasn’t so patient with that whole side of the process… the time it took bothered him.”