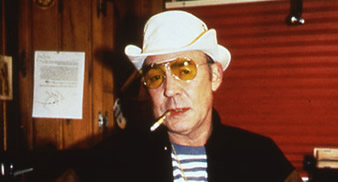 Hunter S. Thompson died at his Colorado home on February 20 from a self-inflicted gunshot wound. The legendary Rolling Stone reporter, counter-culture chronicler, “gonzo” journalist, pro-drug campaigner, and author of Fear And Loathing In Las Vegas was just 67. At the time of writing, no motive has been given for his apparent suicide.

A natural born writer, Hunter Stockton Thompson performed stunning acts of violation on the English language, penning flamethrower polemics on American politics and culture that seemed to roar off the page and engulf the reader. He also dabbled in real-life politics in 1970, standing for Sheriff of Colorado’s Pitkin County on a drug decriminalisation platform under the Freak Power Party banner. After spotting the Republican candidate’s buzz cut, the reckless author shaved his head entirely and referred to his rival as “my long-haired opponent” throughout the campaign. He lost by a few votes.

Sadly, Thompson’s fiercely funny and hallucinatory prose proved notoriously difficult to capture on screen. Bill Murray made a bold fist of playing the gonzo author in Art Linson’s cult 1980 biopic Where The Buffalo Roam, but Doctor Gonzo’s acerbic energy was largely absent. Eighteen years later, Terry Gilliam made a doomed but impressive attempt at filming Fear and Loathing In Las Vegas. Johnny Depp shaved his head in the Thompson role, while Benicio del Toro bulked out to play his “Simoan” lawyer sidekick, Oscar Acosta. The hyperkinetic movie was a fascinating, acid-fried mess, but it bombed at the box office.

All the same, Depp and Del Toro became firm friends with Thompson. When Depp visited the author at his fortified compound in Colorado, the two Kentucky-born outlaws bonded by blasting shotguns at gas canisters topped with nitro-glycerine, detonating giant fireballs in the Rocky Mountain night. Thompson later shaved Depp’s head for Gilliam’s film, and even made a brief cameo. Bored during the shoot, the mischievous author phoned a bomb scare through to Depp’s club, The Viper Room. “Man, he’s a sickness,” Depp told Rolling Stone. “He’s a fucking disease that has penetrated my fucking skin.”

Depp and Del Toro are also planning a film version of the author’s debut novel, The Rum Diaries, written in 1959. Del Toro disputes accounts of Thompson’s creative decline, telling Uncut last year: “You should read some of his letters, they’re pretty damn good. People who say he was great back in 1972 – they don’t know anything, in my opinion. He hasn’t written a novel or a book in a while, but still he’s very sharp. You probably have to experience it, but he’s very strong and he can run circles around you when it comes to language.”

Journalistic fashion may have moved beyond Thompson’s ranting style in recent years, but he could still hit the target like a smart bomb, even in his supposedly declining years. His 1994 obituary for Richard Nixon in Rolling Stone defied polite convention by eviscerating the late president as “a liar, a quitter and a bastard… a cheap crook and a merciless war criminal.”
Seven years later, just days after the 9/11 attacks, Thompson began his weekly column for the US sports news website ESPN by astutely predicting “a sort of Christian Jihad, fueled by religious hatred and led by merciless fanatics on both sides… it will be guerrilla warfare on a global scale, with no front lines and no identifiable enemy.”

That was Thompson’s enduring gift. He was always much sharper, smarter and funnier than his drug-damaged public caricature suggested. The world of high-octane literary fireworks will a poorer, drabber and – let’s face it – less dangerous place without him.