What is Lawrence for? Given the acclaim for the recent “Lawrence Of Belgravia” documentary, you could be forgiven for thinking that his role as a British eccentric and pop star manqué is now much more important than the actual music he makes. That his character is more entertaining than his records. 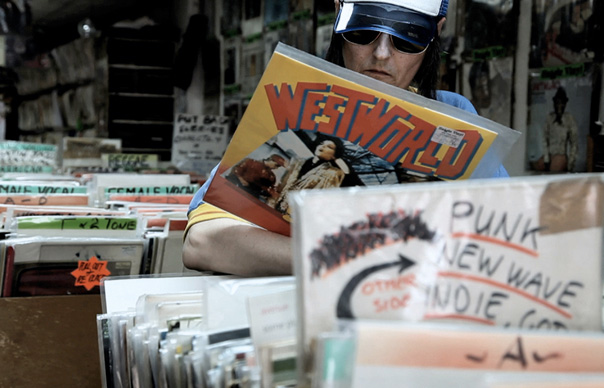 What is Lawrence for? Given the acclaim for the recent “Lawrence Of Belgravia” documentary, you could be forgiven for thinking that his role as a British eccentric and pop star manqué is now much more important than the actual music he makes. That his character is more entertaining than his records.

It’s not hard to see how this might have happened, given how Lawrence’s wonderful interviews sometimes touch on a kind of droll, absurd, tragi-comic performance art (one I did a few years ago involved much tricky scheduling around episodes of “Home & Away”). Worth noting, too, that Lawrence tends to talk about releasing records more than he actually releases them: “On The Hot Dog Streets” is Go-Kart Mozart’s first album in six years, with many of its songs dating back to the ‘90s Denim era, and was preceded by a Record Store Day seven-inch with a Roger Whittaker cover.

A few years away from Lawrence’s new records tends to make me forget, too, what they’re actually like – for all his pronounced affection for novelty rock, not all his songs are quite as daft as “The New Potatoes”. “On The Hot Dog Streets” isn’t just a very funny record, it frequently makes vital and potent new music out of a junkshop glam aesthetic that roughly privileges Staveley Makepeace over Kraftwerk.

The superb “Blowing In The Secular Breeze”, for instance, is an ambiguous paean to declining standards and the fall of Great Britain, set to a rollicking pub singalong tune that possibly resembles Smokie, if I could remember with any certainty what Smokie actually sounded like. “Come On You Lot”, meanwhile, is a terrifically effete terrace chant set to music reminiscent of Space (the “Magic Fly” ones).

Again and again, the musical references fall way outside of the stuff that I usually listen to (unless @junkshopglamman has brought a bunch of seven-inches into the office), but they feel invigorated by Lawrence and his band’s approach: one that’s much more complicated, intense and beguiling than the nostalgic pastiches you’d imagine from reading about them. It’s a tough challenge, though, to separate how “On The Hot Dog Streets” sounds from the whole fastidious package, and the overwhelming stamp of Lawrence. Take the way his chief henchman is billed: on one side of the inner sleeve, he’s listed in the personnel as “K-Tel: Myriad Of Synthesisers – Synth bass – Wurlitzer – Claptrap upright piano – drum machine – vocals”; on the other side – “K-Tel would like it known that in real life his name is Terry Miles.”

The sleevenotes provide vast pleasures, before you even get to the lyrics. The reading and listening provide many tantalising, if not entirely trustworthy, suggestions: a book called “Arbouretums Along The Old Walsall Road” by SF O’Reilly, perhaps? Alex Ferguson’s erotically-charged version of “Stay With Me Tonight”? The songs themselves, of course, are endlessly quotable: “Mickie Made The Most” alone concerns itself with Ricky Wilde and Shack’s Mick Head before extensively reminiscing about 1980s Aston Villa starlet Gary Shaw. And that’s before we get near some of Lawrence’s pronouncements on women, relationships and sex, that come to the fore in “I Talk With Robot Voice”, “Electrosex” and “Men Look At Women”. There’s a thesis to be written about those three songs alone.

Once again, though, the cult of Lawrence’s pulls us away from the excellent tunes, richer and so much less superficial than stereotype might suggest. It’s not a pop record, as much as the deathlessly ambitious singer might imagine it to be – or certainly not a record that resembles much popular music that’s been made in the last 35-odd years. But “Electrosex”, “Ollie Ollie Get Your Collie”, “White Stilettos In The Sand” and the belt-buckle rocking “Queen Of The Scene” (“You think you’re in Poland but it’s Edmonton Green!”) are all great, some of the best songs he’s released since the demise of Felt, over 20 years ago.

Which brings us to the elephant in the room. Good as “On The Hot Dog Streets” might be – and the pulsating, mostly spoken-word drama of “Retro-Glancing” is a classic, I think – it’s hard not to wish Lawrence could find a way back to making records with at least some of the atmosphere and aesthetic of those he made steering Felt. Perhaps his long-promised solo album, if it ever arrives, will be something like that. Eventually, he’ll make his own “Berlin”, albeit one with much better jokes…