As anniversaries go, you might presume that Morrissey hasn't much wanted to throw a party to celebrate his quarter century as a solo artist. After all, his year has been blighted by ongoing health problems - bleeding ulcer, Barrett's esophagus and double pneumonia, food poisoning - and a number of crippling tour cancellations, the most recent due to lack of funding, all of which has led him to note glumly, “the future is suddenly absent.” 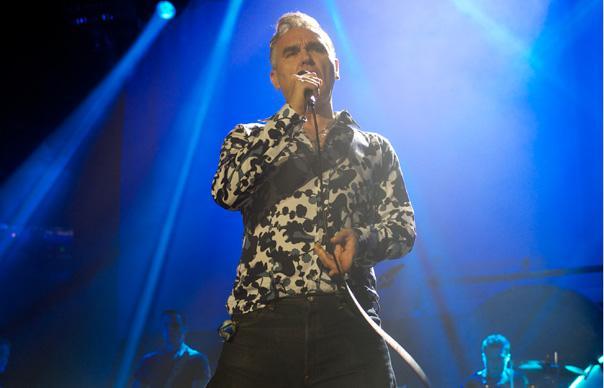 As anniversaries go, you might presume that Morrissey hasn’t much wanted to throw a party to celebrate his quarter century as a solo artist. After all, his year has been blighted by ongoing health problems – bleeding ulcer, Barrett’s esophagus and double pneumonia, food poisoning – and a number of crippling tour cancellations, the most recent due to lack of funding, all of which has led him to note glumly, “the future is suddenly absent.”

Regardless of what you may think of Morrissey’s solo career of late, this is a miserable state of affairs for the singer by any standards. Indeed, most artists tend to mark an anniversary with some kind of bells-and-whistles packages, reissues or other treats. But the muted mood of Morrissey’s 2013 continues via this concert film – the only item (at least, so far) released to commemorate his 25th.

Morrissey 25: Live – his first concert film in nine years – was shot at the Hollywood High School in Los Angeles on March 2, 2013. Of course, Morrissey spent seven years living in West Hollywood, in a house by Clark Gable for Carole Lombard, and later owned by F.Scott Fitzgerald, and it’s been interesting to watch how warmly he’s been embraced in America – after all there are few artists as conspicuously, or parochially English as Morrissey himself. Contemplating The Smiths (and by extension, his own) surprising connection to the good people of America, Morrissey told GQ, “Isn’t that just a common understanding of being trapped? Whether you’re in Flagstaff or you’re in central Manchester, it’s the same.” That said, it’s somehow strange to watch the Cali dudes and girls, with their tattoos and piercings and Ghost World hand-me-downs, address the camera at the start of the film with “We love ya, Moz.” Where are the hairgrips? Where are the second hand shirts? These are not the neurotic boy outsiders from provincial English towns that we assume comprise Morrissey’s natural constituency. “Viva Mehico!”, he announces as he takes the stage. Toto, I’ve a feeling we’re not in Davyhulme anymore. And we’re off, into “Alma Maters”.

The last time I saw Morrissey live was in 2002, at London’s Albert Hall, on the first of two dates which marked his return from self-imposed exile in America. The highlight, I remember, was a show-stopping version of “Meat Is Murder“, with Morrissey writhing around on the stage. Picking himself up at the end of the song, he told the audience, “You know, Bacharach and David would have just shit to write that song.” Watching Morrissey now, filmed 11 years later, I can’t help but recall Simon Armitage’s description of him as looking like “a retired shire horse standing on its back legs”. Age had been relatively kind to Morrissey – he has all his own hair, and although natural spread has occurred, at 54 he looks in good, solid shape. But critically, Morrissey will forever be judged against the callow, Smiths-era version, which seems beamed back at him at frequent intervals – whether it be Smiths reunion rumours, the “This Charming Man” anniversary, the music taste of the incumbent British Prime Minister or even, indirectly, the death of Margaret Thatcher. Even the release of Johnny Marr’s debut album, The Messenger, earlier this year reawakened comparisons with a creative partnership that’s been formally dissolved for 25 years now. The Smiths were only together for five years, but for Morrissey they continue to cast a very long shadow.

Is it possible to be a Morrissey solo fan, but not a Smiths fan? I’m not sure of the answer to that. Nor, perhaps, are any of the man captured in James Russell’s film. These are the die-hard fans, filmed with their arms forever outstretched in the direction of Morrissey on the stage. During an interlude, in which a 9 year old boy is offered to Morrissey, as if for his blessing, a superfan called Julia intones liturgically into the microphone, “Morrissey, thank you for living and for singing so open-heartedly, bless you always.” Good God! Surely even Morrissey is above such flagrant self-indulgence? As a performer, at this stage in his career Morrissey has the craft and timing of a showbiz veteran. It’s fascinating to watch him as he commands the stage with comparatively little movement – he walks here and there, or turns briskly on his heel, but he doesn’t throw shapes. A lot of his power is in the delivery – which is still strong. The current touring band have been together since 2009 – though, of course, Boz Boorer‘s stretch with Morrissey dates from 1991 – and while they’re discrete and sympathetic presences behind Morrissey on stage, they can occasionally be heavy-handed interpreters of the songs. The choice of material itself is admittedly a little patchy – surprising, when you consider there’s nine solo albums worth of material to choose from, as well the rump of The Smiths catalogue. Along with “Alma Matters”, “You’re The One For Me, Fatty” hardly stands as a career high, although “November Spawned A Monster” and “Everyday Is Like Sunday” are both excellent, among the best songs he’s written either in The Smiths or as a solo artist. But inevitably, you can’t help but note that the best material – “Meat Is Murder”, “Still Ill” – was written while Morrissey was still in his twenties.

Morrissey 25: Live is in cinemas from August 24. Meanwhile, we celebrate Morrissey’s quarter century as a solo artist in the current issue of Uncut, where collaborators including Stephen Street, Mike Joyce, Clive Langer and Steve Lillywhite remember working with Morrissey on his early solo albums.