Fela Kuti remembered: “He was a tornado of a man”

The legend of the Black President of the Rascal Republic 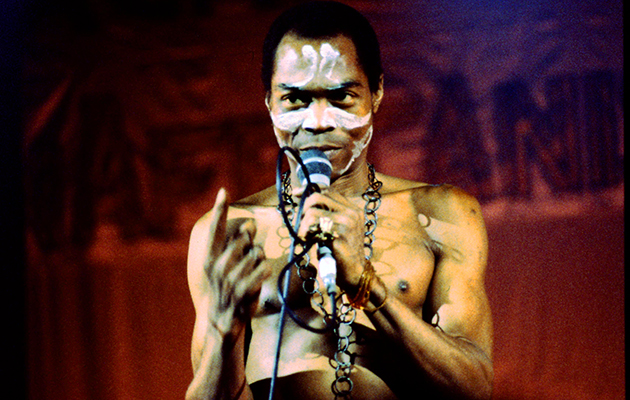 If there is such a thing as a good time and place to be buried alive, a freezing January night in North London isn’t it. Yet here we were, a crowd of maybe 150 of us huddled outside The Town & Country Club in early 1984 as a half-naked man in a trance was lowered into the cold clay of a shallow grave, a man who 30 minutes ago we had witnessed apparently having his throat cut onstage by Professor Hindu, the ‘spiritual guru’ of Africa’s most famous musician, Fela Anikulapo Kuti. Fela himself was among the crowd, wrapped against the cold in an extravagant fur coat. Hindu, on the other hand, wore just his underpants and a pair of smart Italian shoes.

Three days later, we returned for the resurrection, astonished as the same limp body was slowly dug out from the frozen ground and carried inside to be re-animated by Professor Hindu’s incantations and unceremonious kicks. Beforehand, Hindu had entertained us by producing watches from thin air and slicing his tongue. Sleight of hand conjuring tricks – but the burial and resurrection were something else. I ran into the resurrected man later in the gents’ toilet, still red-eyed and caked in mud, puffing on a cigarette. Behind him, a yard-long spool of bloody toilet paper testified that however it had been done, the trick hadn’t been a pleasant experience. Such was the colourful, sometimes alarming world of Fela Anikulapo Kuti, already a cause célèbre though the extremes of his life with Professor Hindu – the trances, séances and chicken sacrifices – would not become apparent until later, while a 20-month prison sentence on trumped-up money-smuggling charges lay less than a year ahead.

Fifteen years after his death on August 2, 1997, Fela remains a complex, charismatic legend. Fearless opponent of political corruption, champion of the dispossessed, prodigious weed smoker, a polygamist who married his 27 “queens” in a single ceremony, self-proclaimed president of his own “Rascal Republic”, flamboyant performer and inspired bandleader… Fela had many roles, not least as creator of his own musical genre, Afrobeat.

Today, Fela’s standing is higher than at any time during his life. There’s been a stage musical, Fela!, and he’s soon to be the subject of both a documentary and a biopic. This month sees the first stage in a heavily annotated re-release of his extensive back catalogue.

“He was a tornado of a man,” says Rikki Stein, who co-managed the star for the last 15 years of Fela’s life. “He liked to play, eat, get high and have sex, he loved irony, humour and stories, but he was also highly principled and tremendously courageous. He put his balls on the line on a daily basis.”