End Of The Road Festival – Day 3

Even though each artist gets at least a 45-minute slot - and everyone on the main stage gets an hour or more - there's still a lack of epic outros at End Of The Road. 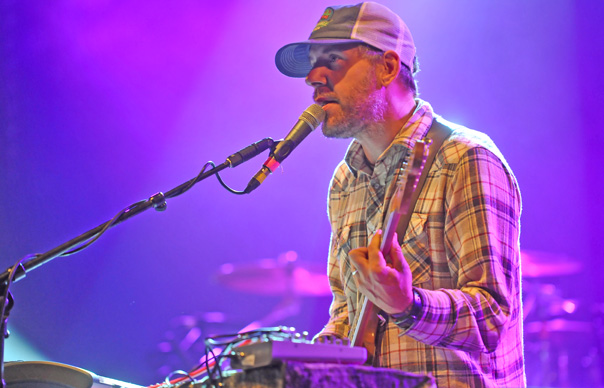 Even though each artist gets at least a 45-minute slot – and everyone on the main stage gets an hour or more – there’s still a lack of epic outros at End Of The Road.

At least Americana-tinged indie-rockers, and Uncut favorites, Woods, playing the Woods Stage, of course, are here to level the score, ending their set with a climactic echo-drenched jam. Although that’s perhaps the wrong word – their imploding, superloud ending (at least seven minutes long, I’d estimate) appears far too structured for that. Either way, it’s an impressive ending to a set that really brightens up a wet day.

Graham Coxon bounds onto the stage next, with a cute “Have you had your tea?” You would imagine that a set from the guitarist’s 2009 psych-folk album, The Spinning Top, would be ideal for End Of The Road, but of course this is Noisy Coxon on show today, supporting his brilliantly caustic A&E.

Though he plays his biggest indie hits, including “Freakin’ Out”, “Spectacular” and “I Can’t Look At Your Skin”, it’s the songs from A&E that are the most noisily invigorating – the opening “Advice”, “Running For Your Life” and “The Truth” (“Here’s another jolly one,” Coxon jokes after the latter’s noisy misanthropy). There’s sadly no outing for “Seven Naked Valleys”, an exceptional, grooving Stooges-like grind, though.

There’s also a good deal of typical Coxon larking about – spitting beer on the microphone, blaming the perfect-pitch-possessing bassist for not noticing Graham was badly out of tune on “What’ll It Take”, and hurting his finger while thrashing during one wild solo, a common occurrence at Coxon gigs. It’s his guitar playing that really shines through, though, and he nets a large crowd.

Who would have known Patti Smith enjoyed Graham Coxon’s set as much as the rest of us, though? “The band who were on before were great, I really enjoyed them,” she gushes. “Sorry, I don’t know their names. They’re Blur but not Blur…”

And that’s merely the tip of the iceberg of Smith’s stage chat, even more unrestrained than usual. Talk of “winged horses”, being free and projecting love might seem a bit mumbo-jumbo-y if you’re feeling cynical, but it’s nevertheless hard to argue with the songs Smith and her band – featuring Lenny Kaye and Jay Dee Daugherty – play. The set begins with “Dancing Barefoot” and ends with a thrilling trilogy of “Gloria”, “Banga” and “Rock’n’roll Nigger”, Smith praising Pussy Riot during Horses’ opening track.

We then briefly slip off to the Tipi Tent to see French space-rockers Yeti Lane. The duo, on guitar, keys and vocals, and drums and synths, create a mighty noise for a two-piece, analogue synths and cavernous guitars pulsating over Krauty drums (of the jazzier Jaki Liebezeit variety rather than the straighter motorik of Klaus Dinger).

“Analog Wheel”, especially, moves from sparse, ambient bleeps to full-on dronebeat, before collapsing into an exultant coda you imagine could soundtrack interstellar sports highlights from a distant galaxy.

Grandaddy were always known for their shambolic live shows – but after reuniting this year, Jason Lytle claimed that a lot of the old equipment had been replaced, meaning the gigs would be a lot smoother. He didn’t reckon on projector problems shaving around 20 minutes off their set, though – a sad loss considering how mighty their performance is. From the opening trio of Sumday songs, “El Caminos In The West”, “Now It’s On” and “Yeah Is What We Had”, to the midset lesser-knowns, including “Levitz” and “Chartsengrafs”, the group sound tight, powerful and content, every synth arpeggio and creaky sample in the right place for once.

“There’s this thing called a curfew,” says Lytle before the final two songs, “Stray Dog And The Chocolate Shake” and “He’s Simple, He’s Dumb, He’s The Pilot”, “and we’re law-abiding people.” How very Grandaddy that some technical problems should be the only blot on a stunning return.