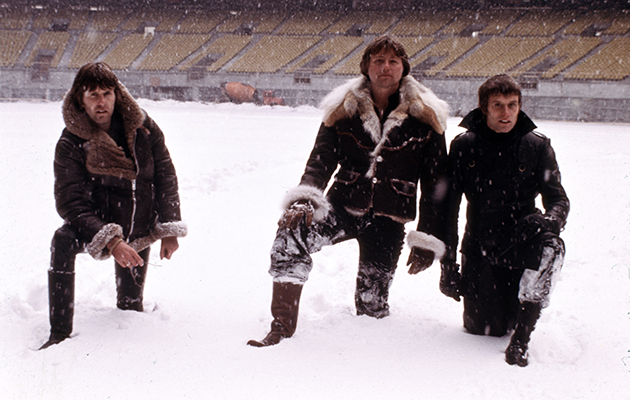 With their racks of modular Moogs and extended classical interpretations, Emerson, Lake & Palmer certainly embraced the decadence of progressive rock. Surprisingly, however, their biggest hit was actually recorded live on one microphone, resulting in a raw version that the trio were unable to improve on.

“We jammed it in the studio, and the sound engineer had the good sense to record it,” says Greg Lake, speaking to Uncut in one of his final interviews before his death in December 2016. “It went down live on a two-track and that’s the record.”

Lake, drummer Carl Palmer and keyboardist Keith Emerson, who passed away in March 2016, were setting up their gear in Switzerland’s Mountain Studios after a long hiatus when they spontaneously began jamming on “Fanfare For The Common Man”, composed by Aaron Copland.

“We all rented houses, up and around Montreux,” recalls Lake. “I had one right at the top of a mountain, right by the top of the clouds, which was actually very weird. And, you know, Switzerland is quite a strange place really – everything is just surreal.”

After complicated wrangles with Copland and his publishers, the recording became an unlikely No 2 hit in the UK, and sparked an extravagant, doomed world tour with a full orchestra in tow. After 19 shows, though, they returned to their original trio lineup.

“We really got on,” remembers Carl Palmer. “I mean, the band has always been three individuals just like it says in the name: Emerson, Lake & Palmer. When we played music together, it was the best time of our lives and probably for all of us it was the greatest time we ever had, when we actually got together and played. It was kind of everything outside of that, really [that was a problem] – we just weren’t as compatible as people might have thought we were.”

“If you played ‘Fanfare…’ today, people like it,” says Lake. “It’s great, it’s uplifting and it’s rhythmic. It got to No 2 in the UK, which for an instrumental is good going really. I mean, if you ever want to hear ELP instrumentally, ‘Fanfare…’ is it – that would be us in a nutshell.”