The new April issue of Uncut, out now, features a fascinating look at the history of Sam Phillips’ Sun Studio, which brought the world Howlin’ Wolf, Jerry Lee Lewis, Roy Orbison and others. Elvis Presley was one future star who cut his debut recordings at the Memphis studio – and in this archive piece from the fourth ever issue of Uncut (September 1997), comedian Frank Skinner talks about the King’s early years and the huge impact the Sun recordings had on him. 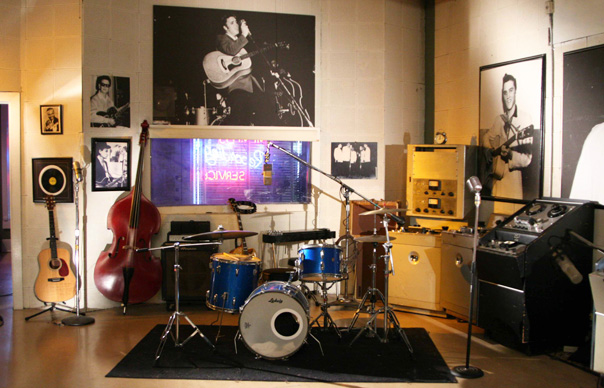 The new April issue of Uncut, out now, features a fascinating look at the history of Sam Phillips’ Sun Studio, which brought the world Howlin’ Wolf, Jerry Lee Lewis, Roy Orbison and others. Elvis Presley was one future star who cut his debut recordings at the Memphis studio – and in this archive piece from the fourth ever issue of Uncut (September 1997), comedian Frank Skinner talks about the King’s early years and the huge impact the Sun recordings had on him.

“It was my brother, Terry, who’s 12 years older than me, who turned me on to Elvis. I was just a kid – I didn’t know the difference between the early hits or the film stuff in the ’60s. I used to buy Elvis Monthly, because it was the only place where you could read about him. The pop papers were full of The Beatles and The Rolling Stones, and Presley was making the worst music of his career.

When I got a bit older and started buying my own records instead of borrowing my brother’s copies, that’s when I fell in love with the Sun sessions. When you hear the Sun stuff for the first time, after having heard the later hits, it comes as a bit of a shock. His voice doesn’t seem as ‘Elvis-y’, it’s not as deep as you’re used to, and it’s really raw. And there’s something about the Sun recordings that make them sound like they’re from another world, a bizarre ‘otherness’ you never really get again with Elvis. lt’s not just his voice, though, it’s the way Sam Phillips recorded everything, particularly DJ Fontana’s drumming. It’s so primitive, it sounds like he’s drumming on a cardboard box.

‘Mystery Train’, in my opinion, is the best pop record ever made. If I was ever on Desert Island Discs and Sue Lawley asked me to narrow down the eight records l’d chosen to just one, it would be ‘Mystery Train’, no contest. If you turn it up loud enough and wipe your mind of everything else, you get this sense of restraint throughout it. You feel a tension in your body, you feel that Elvis and the music is gonna get bigger and louder, but it never quite does. Every time it comes to a new verse, you’re thinking, ‘This is the one, he’s really gonna let go,’ but it doesn’t happen.

He’s holding back, but you really want him to push it over the top. Then, right at the end, he slips into a falsetto – ‘Whoa!’ – and he’s gone! One of the fastest fadeouts of any record I’ve ever heard. I don’t know how deliberate it was, but it works brilliantly. The song leaves you with this feeling that the train is going on to somewhere very exciting, and that you’ll never get to go there. Listening to it is like watching the train go past: you see it for a short time, the rhythm is constant, and then it just disappears into the night. Just like the record itself.

But if you want to hear Elvis’ voice at its best, you’ve got to listen to ‘Blue Moon’. Again, there’s an amazing falsetto, and once more the whole sound is minimalist. The first version of the song I heard was the ‘Bom-ba-da-bomda-dingydangding’ version by The Marcels. It’s all very jolly, but Elvis finds these dark little spaces in it. The lyrics are very syrupy, but you forget about that because Elvis takes you somewhere else. A lot of the subtlety of Sun vanished when he moved to RCA, as the records sounded more and more ‘produced’, but you need room for a voice like Elvis’, you need some emptiness for it to fall into.

Also, he never had that camaraderie again. Elvis, Scotty Moore, Bill Black and DJ Fontana were an actual band. They were on the road together, crammed into the back of a van driving across the Southern States. It must have been so exciting to see him playing state fairs, on the same bill as a bunch of straight country singers. Imagine, the yodelling band goes off and then this bloke comes on gyrating and giving the crowd all these sexy looks. It was all very deliberate – he knew how to press all the right buttons.

Elvis was Elvis long before he went into a recording studio. When he was a teenager at school, he was walking round with sideburns, a pink jacket, and a guitar slung across his back. He was living the life before he’d put anything on vinyl. A local character, he’d be walking around Memphis and people would say, ‘Oh, look, there goes that Elvis bloke.’

There’s a theory that Elvis introduced black music to the white mainstream, but his Sun stuff was never really a fusion of any two styles. ‘Blue Moon Of Kentucky’ is pure country — you wouldn’t be surprised to see him wearing a cowboy hat when singing it. But then something like ‘Milk Cow Blues’ is so black – it was stuff like that which really scared America. He was seen in some quarters as a dirty undesirable, the way a lot of Americans perceived blacks at the time. Elvis was this terrible lowlife hybrid.

There’s still a permanent record of those days, at the Sun Studios on Union Avenue in Memphis. The walls still have the same old hardboard with holes in it for soundproofing, and there are some classic pictures from the era on the wall. It’s a truly amazing place – a real slice of not just musical history, but American history as well.”