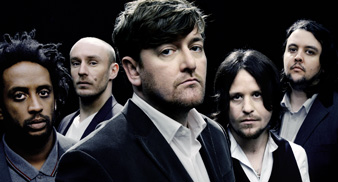 Elbow‘s co-songwriter and bass player Pete Turner speaks to uncut.co.uk as the Bury band’s 2001 debut ‘Asleep In The Back’ is reissued (November 2).

The album, on its release, was nominated for the 2001 Mercury Music Prize features the singles “Powder Blue” and “Newborn” and kickstarted a career that now sees Elbow the subject of a Melvyn Bragg interview for the South Bank Show next month.

Find out what Turner‘s thoughts are, looking back, and to the future. Also, what his favourite albums of 2009 are…

Pete Turner: “It’s definitely very special to us, it was a real labour of love having to record the entire album again after being dropped [by their record label, Island]. But the second version makes much more sense and flows from start to finish. We were definitely setting our stall out.”

“It was a real moment for us. It kind of made us glad we didn’t win with Asleep as it would have been too early.”

“In hindsight it was all pretty special. It was our first time travelling the world and (building up a tremendous tolerance to alcohol), meeting people. Even getting dropped time and time again kept us all really close!”

“My personal favourite has always been presuming Ed. I can remember writing it on a beautiful Winter’s day in a small house in France. I think it’s an area in our music we do well.”

“We’re in the studio now with around sixteen ideas but we’re gonna work on a load more before we start fine tuning.”

“No collaborations there at the moment but there’s certainly a lot of people we’d love to work with.”

The band are also the subject of a South Bank Show special – to be broadcast on ITV1 November 15.