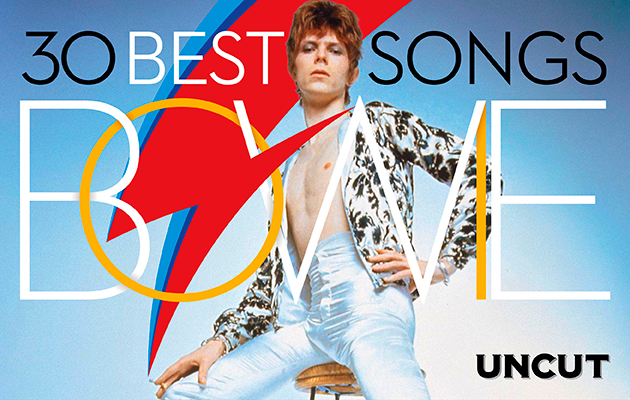 In this mammoth piece from Uncut’s March 2008 issue (Take 133), a host of famous fans and collaborators pick David Bowie’s 30 best songs! “Bowie represented a way to get out of myself, an escape, a hope that there was something else…”

TONY VISCONTI: “When I first met Bowie in 1967, he couldn’t get arrested. The music business and journalists just weren’t looking in his direction for the Next Big Thing. Even when Hunky Dory came out, I think the industry was still scratching their heads. David had to pull his socks up big time and invent his Ziggy Stardust persona.

“I love to work with him because I think we make really good records. His talents are exceptional, and he has rarely inhibited his creativity. I think other recording artists regard him enviably as someone who’s reached the pinnacle of unbridled creativity. He’s multi-dimensional. For most of his career, he’s been an iconoclast, not a trend follower. But then, he also has a charm and charisma usually associated with movie actor legends. Although he never denies his working-class upbringing, he’s like royalty. These days, we keep in touch via email. Instead of watching a film together we send each other links to YouTube. We also send each other all types of music we’ve either discovered or rediscovered. During the making of the last two albums, Heathen and Reality [which Visconti produced, along with earlier Bowie LPs Young Americans, Low, “Heroes”, Lodger and Scary Monsters…] we used to watch episodes of The Fast Show and The Office, respectively, on our lunch breaks. We both love British comedy.

“We’ve known each other for 40 years. There’s no pretension, no awe, just a mutual love of creating something from nothing. On the other hand, we don’t take each other for granted. I respect him more than ever. He’s one of the few people I know who actually keeps on growing. He’s always full of surprises and revelations.

“Who hasn’t been inspired by Bowie’s music? Certainly not the über and unter peers contributing to this collection. David Bowie has long ago achieved Gandalf status in the rock world, and his songs have become potent magic spells.

“Welcome to Uncut’s Top 30 Bowie songs, picked to praise by an all-star cast.”

30 In The Heat Of The Morning
Available on Bowie At The Beeb: The Best Of The BBC Radio Sessions 1968-1972 (recorded 1968, released 2004)
An early track that catches the newly solo artist in mid-transformation – part mod King Bee, part theatrical Tony Newley trouper

ALEX TURNER (Arctic Monkeys/Last Shadow Puppets): For the B-side of [the Last Shadow Puppets’] “The Age Of The Understatement” single we’ve done “In The Heat Of The Morning”, which is the first track on Bowie At The Beeb. It’s got a great melody – it’s one of them, where we both had the CD, and we were both like, “The first tune on that!” And we were both like, “Yeah, yeah!” It was very much part of the world we were in when we started writing stuff for The Age Of The Understatement, so when it came to recording B-sides, there were some tunes we definitely wanted to do: “The Girls And The Dogs” by Scott Walker, “Wondrous Place” by Billy Fury, and this.

MILES KANE: I also like “Time” on Aladdin Sane, and “Five Years”. Does the aspect of re-inventing myself appeal? You should see me at the weekend. Eyeliner, the lot…

ADRIAN BELEW: Bowie was a very charismatic person to be around. Musically, he gave me complete freedom to go wild and have lots of ideas. Recording Lodger in Lake Geneva, David and [co-producer] Brian Eno played me some tapes, wanting my initial reaction to certain music. Eno had a chart of favourite chords on the wall. He’d point to a chord and you’d just go along and improvise. He and David were great advocates of getting you to do things you never realised you could. You wouldn’t even hear the songs – no tempo, no key – and it immediately threw you into a different space. It was one giant brainstorm. I had a go at playing “Heroes” and remember walking in on David and Brian and they were just laughing. Nobody told me the original was made of various guitar parts spliced together. They thought it was hilarious I’d been able to play all those composites live! In New York, David was doing vocals for “Boys Keep Swinging”. He played me it and said: “This is written after you, in the spirit of you.” I think he saw me as a naïve person who just enjoyed life. I was thrilled with that.