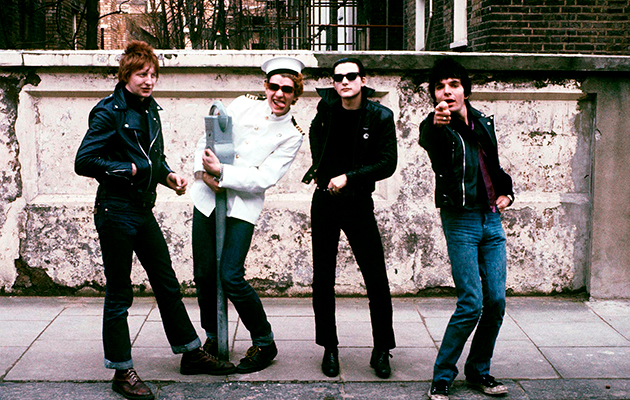 In 1976, The Damned released the first punk single, “New Rose”. 40 years later, the band’s original lineup – Dave Vanian, Captain Sensible, Brian James and Rat Scabies – tell Peter Watts their lurid tales, from the toilets of Croydon to the stage of the Royal Albert Hall…. “Most of the wild stories are true!”

The first time The Damned played in France, it was the hospitality industry that suffered the most. “It’s a lot of fun, believe it or not,” recalls Rat Scabies. “A lot of it wasn’t malicious, it was buckets of water over the manager’s head. Covering the toilet in cling film. We never put anybody in hospital. We were destructively bad in France and made a point of trashing everything we could.” This was in August, 1976, when The Damned were booked to appear at the self-described “first European punk rock festival” in Mont-de-Marsan, Aquitaine. It was only the band’s sixth show. Though the festival was intended to showcase the best of the emerging scene, the Sex Pistols were banned and The Clash pulled out, leaving The Damned to fly the flag alongside a less clearly delineated lineup including Eddie & The Hot Rods, Pink Fairies and the Hammersmith Gorillas. Although the festival itself wasn’t necessarily special, it did cement the band’s reputation as troublemakers.

“It went from the Captain pissing in the monitors to destroying entire hotels,” says Scabies. “We were horrible English hooligans and the French weren’t impressed.” They spent the weekend picking fights and throwing eggs. This is how they appeared as they boarded the coach with their fellow British bands to set off on the return trip to Victoria Station: bruised, cut, stinking of stale beer and raw egg. It was in this memorable condition that Tyla Gang frontman Sean Tyla was moved to describe the yolk clinging to bassist Ray Burns’ hair: “You’ve got a right bloody captain sensible there.” The name stuck.

But that trip to France wasn’t memorable just for the terrorising of hotel employees or the number of black eyes dished out. Also in attendance were Jake Riviera and Nick Lowe: impressed by The Damned’s two sets at Mont-de-Marsan, Riviera wanted to sign them to his new label, Stiff, with Lowe producing. Riviera had even identified the band’s debut 45. When The Damned released the first British punk single – “New Rose”, in October, 1976 – nobody could have predicted that, 40 years later, they’d still be going strong; least of all the band themselves. Brian James still remembers the pride he felt when he first heard the finished recording. “I never expected to be talking about it today,” he says. “I remember getting the test pressing and thinking, ‘It sounds so good. If it all stops now, I’m a happy man. My band sounds great, my song sounds wonderful.’ It wasn’t until ‘New Rose’ that I had anything that sounded right.”

The Damned’s round-up of ‘firsts’ makes for an impressive set of milestones. First punk single, first punk album, first UK punk act to tour the US, first to split up and first to reform. In their first decade, they went from three-chord thrashers to 18-minute symphonies and goth pop hits, leaving a trail of chaos along the way. “The Damned was all about freedom of expression,” says Dave Vanian. “There were no rules. It was also a celebration of life. If you saw us onstage or in the dressing room, it could be chaos. Most of the wild stories are true and the worst ones have never been told. Roadies tried to imitate us and ended up in hospital or asylums. You’d think, ‘My God, how can this band get anything done?’ But it was a different story in a studio.”