In the same way that Marshall amps revolutionised rock music, allowing heavy rock and metal to flourish, loop pedals have changed the state of play for solo performers. No longer having to rely on real-time performing, the first two acts on tonight at the final night of Club Uncut at The Great Escape have been able to take folk to stranger, new climes. 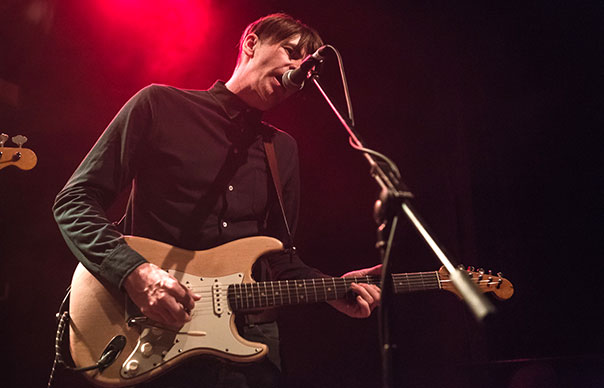 In the same way that Marshall amps revolutionised rock music, allowing heavy rock and metal to flourish, loop pedals have changed the state of play for solo performers. No longer having to rely on real-time performing, the first two acts on tonight at the final night of Club Uncut at The Great Escape have been able to take folk to stranger, new climes.

Opening the night at the Dome Studio, Lisa Knapp‘s take on folk is more traditional and earthier than what follows. Performing May carols, folk songs from Cornwall and Hampshire ballads about water sprites, Knapp loops her voice and violin, sometimes picking at her instrument like it’s a ukulele and at other points looping long, sweeping drones reminiscent of John Cale.

While the songs and instrumentation are traditional, though, some of her other approaches are wildly experimental. The spoken-word loop, “Sky… wood… meadow…”, plays throughout the opening song, while near the end of her set one piece is disrupted by a lo-fi sample of a cuckoo clock.

Cuckoos are also present in the next performance, from You Are Wolf – and Buckinghamshire native Kerry Andrew also uses the loop pedal to its full extent, yet, aside from bass guitar on some songs, the only tuned instrument is her voice. Constructing layers of beatboxed percussion and harmonies, along with some eccentric real percussion like a knife and fork, a whisk and what looks like the lid of a kitchen bin.

These impressive looped edifices are the foundations for a set of songs about British birds, both traditional and original. Barn owls, sparrows and, yes, cuckoos are all featured, along with some fascinating ornothological facts. More Springwatch than The Great Escape, but a welcome change.

If the feathers on You Are Wolf’s shoulders seem glamorous, that’s nothing compared to Arc Iris‘ get-up. The four-piece, led by former Low Anthem member Jocie Adams, are clothed in glittery jackets, and in the case of Adams herself, a skintight, sparkly gold bodysuit. From this you might expect electro-pop or ’70s-inspired glam if you hadn’t heard their debut album, released a few months ago, but the quartet are a lot more complex than appearances might suggest – there are masses of augmented chords reminiscent of Steely Dan, cascading Rhodes pianos that suggest Hatfield And The North and complex time signatures, with almost every song featuring off-kilter rhythms such as 7/4 or 5/4.

This is ambitious music, also taking in influences from cabaret and the kind of vocal melodies that you find in classic American musicals; it’s no surprise to hear that Adams has extensive classical training.

They finish with “Swimming” and get a hugely warm reception from the audience, obviously impressed by the twists and turns of their songs and their outlandish attire. Both their music and outfits are clearly ridiculous, yet in the best possible way.

The evening, and this year’s Club Uncut at The Great Escape, is closed by Trans, Bernard Butler and Jackie McKeown’s Krautrock-inspired, improvisational pop outfit. Before they even begin their first song, “Dancing Shoes”, from their debut “Red” EP, though, they are suffering from sound problems onstage.

“Where’s the bass? Where’s the bass?” repeats Butler. “This is the worst stage chat I’ve ever heard,” laughs McKeown as he asks yet again for more guitar in his monitor. During the first song’s instrumental break, he and Butler are forced to swap sides onstage in order to hear each other.

When we saw Trans at London’s tiny Shacklewell Arms a few months ago, they seemed to be having a great time onstage, which gave the music a real energy and sense of fun in line with their “celebrate good times” style of lyrics. Tonight, the musical interplay is excellent, with Butler’s soloing (unsurprisingly) shining, but due to the sound conditions, it doesn’t seem like the band are having such a good time onstage.

Still, though, McKeown springs around like a dynamo on stage left, always ready with a witty quip or a risqué joke, while Butler is his glowering, intense opposite on stage right.

As the set nears its end, Trans finally seem to get comfortable, with “Building No 8” a jammy, Television-esque highlight (“this might seem like four songs, but it’s actually one,” says McKeown), before their goofiest and most enjoyable pair of tracks, “Rock Steady” and “Jubilee”, send everyone off into the dark Brighton streets with a spring in their step.