Before the doors of the Dome Studio Theatre even open tonight (Saturday, May 18), there's an excited queue stretching most of the way down the street. Not surprising considering one of the most hyped groups of this year, Irish band The Strypes, are first on the bill. 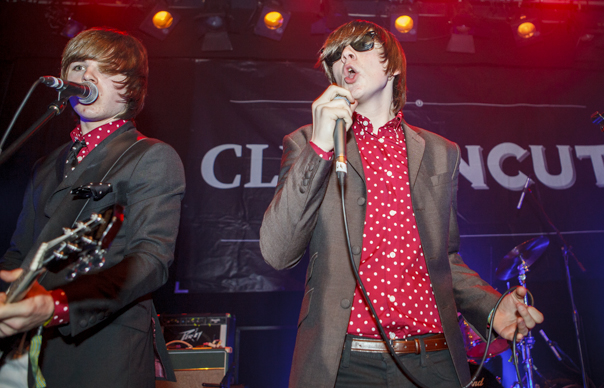 Before the doors of the Dome Studio Theatre even open tonight (Saturday, May 18), there’s an excited queue stretching most of the way down the street. Not surprising considering one of the most hyped groups of this year, Irish band The Strypes, are first on the bill.

Inside, the crowd are noisily waiting for the group they probably last saw on Later With Jools Holland – in the programme’s studio confines, the group seemed a little tame, and not too comfortable onstage – they are 16, after all. But tonight the band are a revelation, a lot rawer, a lot noisier and totally at ease onstage. Guitarist Josh McClorey is especially mesmerising, ripping out garage-blues riffs and Page-like solos in equal measure.

The four-piece are wired and seriously tight, switching seamlessly between one song and the next in a hail of feedback, harmonica and crashing drums, barely pausing. All four are impressive players, which makes their ’60s R’n’B, of the kind last peddled by the Stones and Them, entirely convincing. They perform a number of covers throughout the set, including “See See Rider”, “Ain’t No Love In The Heart Of The City” and “Rollin’ And Tumblin’” – it’s impressive that their own songs, such as recent single “Blue Collar Jane” and its B-side, “What The People Don’t See”, seem in no way slight or hackneyed in the company of such classics.

While the crowd might expectedly dwindle after The Strypes leave the stage, Mary Epworth still commands a good-sized audience. The English folk singer-songwriter has dropped any winsome Newsom-like traits and now embraces a more eclectic sound – she plays drums standing up like Mo Tucker throughout the set, while her group include a grizzly rocker playing distorted bass and punching the air and a clean-cut muso on synths and laptop.

Her single “Black Doe” gets a more than appreciative reception, but the highlight is the sparse closing cover of “The Four Horsemen”, by Greek prog legends Aphrodite’s Child, Epworth transforming Demis Roussos’ blustery falsetto into something much earthier and powerful.

Ty Segall collaborator Mikal Cronin performed here on Friday night, and tonight White Fence, who made last year’s Hair with Segall, plays. A solo artist on record, Tim Presley is joined by a four-piece group (with one off-puttingly playing a Steinberger headless guitar throughout – any right-thinking person knows there is never an excuse for that), who gamely and consistently bash away at the twisted psych riffs while Presley lets loose all manner of feedback and guitar abuse on his Jazzmaster.

Most of the tracks are taken from the recent Cyclops Reap album, but barring a mid-set lull during an overlong motorik jam, Presley manages to keep the crowd’s full attention, and even gets some rather inebriated people dancing at the front.

New Yorkers Woods close the night, beginning with some relaxed country-tinged guitar pop and steadily getting looser and more (politely) raucous until they end with their customary epic jam. The janglier tracks from their most recent record, Bend Beyond, get the warmest reception, especially “Size Meets The Sound” and the ornate title track.

Singer Jeremy Earl has put out a lot of White Fence on his label, Woodsist, but unfortunately there’s no guest appearance from Tim Presley during their set – as well-crafted as Woods’ songs are, they could benefit from a little more of Presley’s wildness. That’s just not Woods’ way, though; even their extended jam possesses a well-considered and exceedingly tasteful ebb and flow rather than a freeform abandon. A sophisticated end to another classic Great Escape.