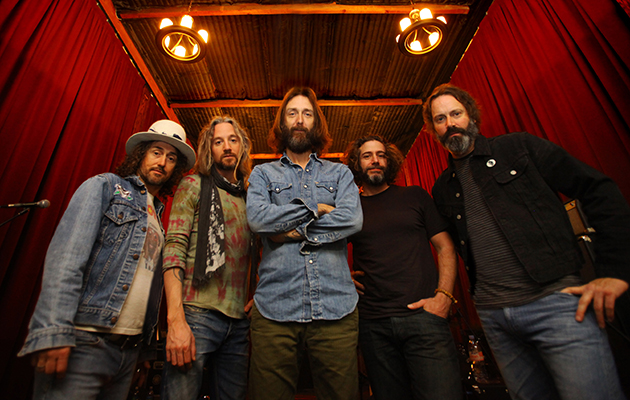 It’s a week ’til the next issue of Uncut officially hits the shops in the UK (if you subscribe, your copy will hopefully turn up a day or two earlier than that). I should keep quiet about the substantive contents of the issue for a little while yet – maybe I’ll post something on Twitter when the advance copies arrive in the office – but it occurred to me that, as a preview of sorts, I could belatedly post my review of the Chris Robinson Brotherhood’s debut London show from a few weeks back…

In 2012, around the time that the first Chris Robinson Brotherhood album was released, their frontman was asked when the band would visit the UK. Robinson might have spent 20 years headlining some of the planet’s bigger venues with The Black Crowes but, at that point, his new project showed little inclination to leave their home state. “It’s hard,” Robinson told Uncut’s Graeme Thomson. “People asked us, ‘Why did you play so many dates in California?’ Well, because you can drive around with a pound of weed and not get in trouble. Let’s face it, we have priorities as a band.”

Four years, three albums and, one might confidently assume, a few more pounds of weed down the line, the Chris Robinson Brotherhood have finally made it to London. Behind them, a flag of California hangs resplendent, a marijuana leaf embroidered on one corner. Beneath their feet, there are Persian rugs. On the amps, a ceramic owl, named Possible Dust Clouds, holds a clutch of joss sticks. The hair is all long, while the beards have a certain unmediated quality that make them unlikely to be mistaken as hipster affectation. The vibes – and there are emphatically vibes – suggest five men fantastically unafraid of clichés in their wholehearted embrace of a vintage counterculture. As Robinson expressed it in another Uncut interview, “Whatever name you wanna put on me, hippie, beatnik, bohemian, demure anarchist – I don’t know what to call it, but I know there’s lots of us out there.”

An evening with the Chris Robinson Brotherhood, then, works out as a celebration of how American musical traditions can be at once honoured and psychedelically expanded. It would be no disservice to this exceptional group, as they rattle through covers of Dylan, Slim Harpo, JJ Cale and more, to think of them as a kind of cosmic bar band: here to jam on some favourite tunes, make their people dance, and keep going for as much of the night as The Man will allow.

The most obvious antecedent to all this is The Grateful Dead (The CRB have just been recording their fourth album in the Dead’s old neighbourhood of Marin County), and it’s striking to note how the Brotherhood engage with that heritage in comparison with the more uptight reinventions of the new Day Of The Dead compilation (I reviewed that for the new issue of Uncut as well, actually). There are no anxieties here about whether choogling and extensive guitar solos are suitable fare for a 2016 indie-rock constituency. Instead, the show takes the shape of a classic Dead gig: two long sets, of eight long songs apiece, where old chestnuts are interspersed with bold, freeform manoeuvres. A masterclass in good-time virtuosity, in which the transcendent, communitarian possibilities of rock’n’roll are dusted down for one more unself-conscious boogie round the block. “Time to hear the music emitted from the spheres,” as Robinson sings in “Vibration And Light Suite”, “Time to dance like children on our diamond tears.”

For all his historically well-documented love of these esoteric rituals, Robinson is still an unlikely ringleader of such an easy-going band. While The Black Crowes always seemed to be a mess of tension and volatility, the Brotherhood appear more of a freewheeling coalition. No longer a preening lord of misrule, Robinson has mostly traded in his old strutting for a rhythm guitar and an air of the benign paterfamilias; as if Mick Jagger, in middle age, had decided to recreate himself as Jerry Garcia.

Confusingly, though, it is the guy to Robinson’s right, looking a little like Bob Weir, whose rococo lead lines bring Garcia to mind. This is Neal Casal, formerly a solo practitioner of artisanal Americana, now a spectacular guitarist who can sometimes be found in the company of Phil Lesh and Cass McCombs as well as the Brotherhood. It is Casal who sends burnished country-soul ballads like “Reflections On A Broken Mirror” and “Star Or Stone” into the ionosphere. Even at their most ornate, Casal’s extrapolations never seem self-indulgent. Rather, like a member of the very best improvising collectives, he seems merely one of a group of players who can fall in and out of each other’s orbits with an intuitive grace.

That skill is in no small part bolstered by the CRB’s rhythm section of Mark Dutton on bass and newish drummer Tony Leone, whose limber momentum means they could efficiently sub for either The Band’s Danko/Helm axis or The Meters’ George Porter Jr and Zigaboo Modeliste. Black Crowe alumnus Adam MacDougall, meanwhile, is a more divisive figure. While he appears capable of turning his hand to anything on the keyboards, the gloopy Moog settings that he favours force one impassioned audience member to compare them to the Grange Hill theme. MacDougall is at his best when he swivels round to attack a clavinet, driving “After Midnight” – frantic where JJ Cale’s original moseyed – into an exuberantly funky Stevie Wonder zone.

It’s easy, as you can probably tell, to reduce a Brotherhood show to an ecstatic grid of reference points: how it begins with a version of Mac Davis and Delaney Bramlett’s “Hello LA, Bye Bye Birmingham” that could pass for a resurrected Burrito Brothers; how my notebook, where legible, also contains allusions to Clarence White-era Byrds, Funkadelic, Ned Lagin and The Allman Brothers, a virtual index of Uncut touchstones. Nevertheless, some of the gig’s highlights draw attention to another continuum between the past and the present – between The Black Crowes and the Chris Robinson Brotherhood.

“I Aint’t Hiding”, for instance, is one of a clutch of songs in the CRB repertoire that date from the dog days of the Crowes, specifically from their final album, 2009’s Before the Frost…Until the Freeze, recorded live at Levon Helm’s Woodstock Barn. Perhaps there’s a little more innate menace to “I Ain’t Hiding” than might be detected in more recent Robinson songs, but the swing, the effortlessly-deployed classicism, reveals a throughline between his superstar years and this humbler, unencumbered new age.

Likewise “Rosalee”, the first set’s rapturous closer. “Rosalee” comes from the CRB’s first and best album, 2012’s Big Moon Ritual, evolving from choppy funk, through rich a capella harmonies, into passages of deep space skronk and back again. At its core, though, is a song bold enough, with a few subtle adjustments, to pass as an anthem from the Black Crowes’ commercial heyday. Robinson’s unreconstructed lyrics could possibly benefit from a 2016 refresh, in a way that his music would not, but the refrain still acts as a sort of mission statement, from a band instinctually too amorphous to admit anything so formal.

“Is the air getting thinner,” emotes Robinson, joyfully, “or are we getting high?” The freak flag’s been planted in foreign soil and, finally, the supply lines are open once again.