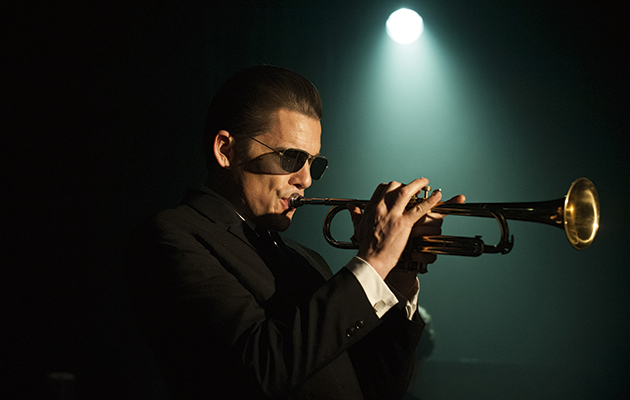 “Who do you like better?” Asks Ethan Hawke’s Chet Baker at the start of Robert Budreau’s biopic. “Me or Miles Davis?” The question is meant to frame the film’s narrative conflict between East Coast jazz (angular, staccato) and its West Coast counterpart (laid-back, melancholy), but in a year in which Don Cheadle’s Miles Ahead has so far dominated music films, it has a more prescient quality.

Like Cheadle’s film, the principle action in Born To Be Blue takes place in a relatively small but critical window of time; Davis appears here, too, played by Kedar Brown as an angular, growling presence. Davis hangs over Born To Be Blue in more ways than one. In a chronological sense, the film begins in 1954, when Baker plays Birdland. After the show, he asks David whether he liked it. “It was sweet, like candy,” says gravelly voiced Miles, telling him to come back again when he has lived a little more. Is Baker ready – literally and figuratively – to play Birdland?

In fact, Budreau’s film is a little less straightforward than that. As with Miles Ahead, Born To Be Blue offers a meta- account of a key section of Baker’s life, mixing half-truths alongside real events. The wall is gone through. It opens with a film within a film, with Baker cast as himself in a biopic; a fictional conceit. It follows this immediately with a real life incident, where Baker was brutally beaten up, losing his front teeth which forced him to rebuild his technique from scratch. There is heroin galore – true – and an understanding if exasperated girlfriend, an actress named Jane (Carmen Ejogo) – false – who nurses Baker through the worst of his rehabilitation. As Baker, Ethan Hawke is intensely committed – subtly conveying a complex mix of frailty and arrogance – and there is strong work from Ejogo as well as Callum Scott Rennie as Baker’s long-suffering ally, Pacific Jazz Records founder Dick Bock.

“Was it really like this?” Jane asks on the set of the fictional Baker film, though she might as well be asking how accurate Budreau’s excellent film is. “No,” replies Baker. “If this were real, there would be vomit everywhere.”

BORN TO BE BLUE IS ON GENERAL RELEASE