If, as internet speculation and promo footage imply, “Tomorrow’s Harvest” has a Cold War/atomic age subtext, Boards Of Canada’s focus is, as ever, long-range and aesthetic: less on the actual devastation wrought by nuclear weapons, more on nebulous creep and on the terrible beauty of a mushroom cloud when observed from a relatively safe distance. It’s a potentially glib way of toying with signifiers: Armageddon as nature documentary. 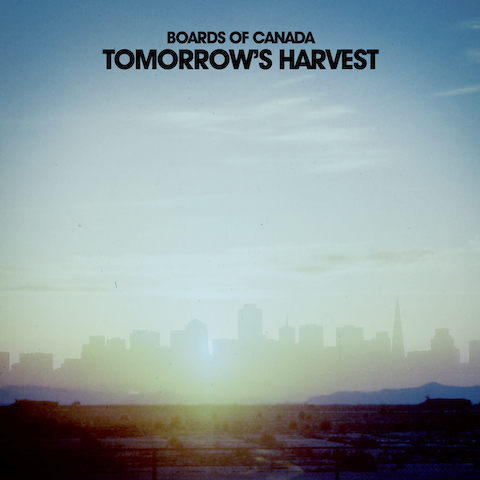 If, as internet speculation and promo footage imply, “Tomorrow’s Harvest” has a Cold War/atomic age subtext, Boards Of Canada’s focus is, as ever, long-range and aesthetic: less on the actual devastation wrought by nuclear weapons, more on nebulous creep and on the terrible beauty of a mushroom cloud when observed from a relatively safe distance. It’s a potentially glib way of toying with signifiers: Armageddon as nature documentary.

But Mike Sandison and Marcus Eoin’s work has always been about landscape and inference rather than specifics, and the pervading influence of this, their fourth album and first in eight years, is once again uneasy, but attractive. Those eight years do not appear to have been spent radically reassessing their musical choices. If anything, swathes of “Tomorrow’s Harvest” feels like a retrenchment into the dense, sometimes oppressive soundworld of “Geogaddi” after the comparatively sunny, at least superficially more organic, designs of their last album, “The Campfire Headphase”.

Dedicated followers of BOC (and the band have long, albeit slyly, encouraged their own cult with codes and mysteries; with the artful weaving of nostalgia, the uncanny and higher mathematics) saw this coming, of course, some time before the video for “Reach For The Dead” was leaked last night. With hindsight, the pre-release campaign for “Tomorrow’s Harvest”, involving one-off 12-inches, strings of significant numbers, inexplicable broadcasts and so on, feels a bit botched and unfulfilled.

But the excitement it generated was palpable, even in the shadow of the monolithic operation being carried out simultaneously by Daft Punk, and the resonances of number stations and shortwave espionage, heavily suggested a return to darker terrain (was that old story about them recording in a disused nuclear bunker ever proved?).

“Tomorrow’s Harvest” begins with a perky callsign fanfare, though it is closer to a ‘70s TV channel ident than one of those deployed by the numbers stations on The Conet Project. There are numbers here, most notably in “Telepath”, though the way they run in sequence from one to ten, before being fragmented, seems to suggest dislocation more than code.

It’s an obvious risk, though, to jump to any kind of conclusions about a BOC record after three or four listens: it’s not just the likely proliferation of hidden meanings, but also the way the brothers’ music works so gradually and insidiously. As a consequence, opinions here come with even more caveats than usual…

After the fanfare, “Gemini” moves into what will become one of the default settings for much of “Tomorrow’s Harvest” – a sort of menaced abstraction, that on first couple of listens fractionally recalls Goblin dabbling in ambience. Again, the closest back catalogue reference point remains “Geogaddi”, but this time it often feels as if the passages that were once used as interludes have been extended and become the focus: the murky, skittering beats and devil voices of “Split Your Infinities” runs to four and a half minutes; “White Cyclosa” takes up three minutes when, on “Geogaddi”, one suspects it would’ve been compressed into a third of that time.

These are not easy tracks to crack, and the fanatical layering of sound means that it’s hard to come to a fast conclusion about them (there’s a real serendipity that one of BOC’s true peers, My Bloody Valentine, should stealthily resume operations in the same year). I don’t envy Louis Pattison, who put together a piece for the new issue of Uncut after a playback at Warp, but his detection of a semi-buried John Carpenter influence, that I haven’t picked up on previous records, seems apposite (especially on “Collapse”).

With the more immediate tracks, there’s a not-unpleasant sense that Boards Of Canada’s aesthetic, their palette of dulled breakbeats, melodies that are redolent of old documentary soundtracks bent and submerged, muffled voices and so on, is now so distinctive that it could be taken as self-parody. The listening stream uses fake track names, which are no more or less daft/plausible than the actual ones: a sequence of BOC songs titled “Split Your Infinities”, “Uritual”, “Nothing Is Real” (the ur-BOC track, perhaps), “Sundown”, “New Seeds” and “Come To Dust” could have been fabricated by a mischievous impersonator, such is its occult closeness to cliché.

As ever with this sort of thing, though, if you’ve been satisfied with BOC’s style in the past, it seems churlish to criticise them for sticking with it. “Reach For The Dead”, as you already know, is the clear evidence of that, but “Cold Earth” is the first real, swift classic on “Tomorrow’s Harvest”, one of those fragile, beautiful headnodders in the vein of “Music Is Math” (it occurred to me this morning that I saw a few BOC live shows around the cusp of the millennium that consisted of almost entirely unreleased tunes, and wondered whether any of those have belatedly ended up on this collection?).

Gradually, the album moves to a comparative clarity: the graceful love theme that emerges from the murk of “Sick Times”; “Palace Posy”, with a directness and leftfield bounce building into mechanistic, haunted funk, reminiscent of both “Music Has The Right To Children” and their Warp contemporaries, Plaid. “Palace Posy”, too, finds the sampled voices unusually deployed to harmonic ends – it’s not exactly a BOC track with singing on it, but they haven’t really been much closer, as far as I can remember, to such a whimsical concept (maybe “1969”?).

Then, tracks 15 and 16, make for a fantastic ending (undermined, predictably, by one ominous drone, “Semena Mertvykh”, in their wake). “Come To Dust” is an end-titles, widescreen resolution of all that has gone before, the Carpenter-style arpeggiators pushed into the background as one of Sandison and Eoin’s grandly portentous melodies moves into focus. And “New Seeds”, as the title flags, is a rare flickering of optimism; upbeat, vague kin to “Dayvan Cowboy” and, after about four minutes, blessed with one of those covertly ecstatic gear-shifts at which they’ve always excelled.

Strangest of all, though, “New Seeds”’ first riff is a jittery, rattling thing that reminds me of Destiny’s Child’s “Bootylicious”; not something I expected. Perhaps, the hidden resonances and black ops of Boards Of Canada have greater depths than even the most assiduous conspiracy theorist can conceive…

Check this: an interview I did with Boards Of Canada circa Geogaddi.