In-depth reviews of every album. Remarkable contemporary encounters. And fantastic new interviews with band members and key players about the band’s incredible legacy 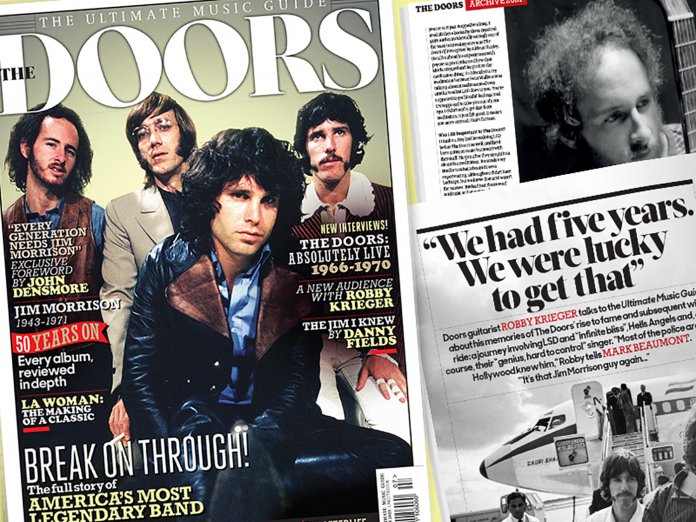 “The end” is obviously a huge part of the concept of The Doors, and it’s true also that this magazine arrives with you on the 50th anniversary of the passing of the band’s uniquely charismatic lead singer Jim Morrison. But really, the subject of this latest issue of the Ultimate Music Guide isn’t how the music ended, but how it endures. How, 50 years on from their singer’s death – a period of time including two Jim-less albums, regroupings, and legally-challenged reformations of the surviving members – the music of The Doors remains so powerful.

In his exclusive foreword to the magazine, the band’s drummer John Densmore gives the matter some thought. “The Doors had their finger on the pulse of what was going on culturally during their heyday,” he writes. “They tried to expose the dark underbelly of the bullshit taught by politicians, parents…”

Reading and re-listening to the music while editing the magazine, you can definitely get a feel of some of the danger in that proposal. There was plenty of music made in 1967 to feed your head, but precious little which could rearrange it with the majesty and authority of that made by The Doors. Inside, you’ll find in-depth new reviews of every Doors album from their magnificent debut, through their excursion into pop with the Soft Parade, and final powerful retrenchment in the blues with LA Woman, which celebrated its 50th anniversary in April.

You’ll also find a blend of interviews and features. There’s an entertaining archive sequence about the band’s eventual arrival in London in 1968, in which the rumour of a singer who “thinks he is Christ” materialises in the person of a great rock band and their frontman who is actually quite keen on doing some sightseeing. There’s also a new and revealing Q&A with Robby Krieger, and a hilarious eyewitness account from Uncut’s Nigel Williamson on being an expert witness in the legal battle to determine who had the legal right to operate as “The Doors”.

There’s also considerable new work. You’ll find an extensive oral history on the Doors as a live band – not only the drama of what one observer calls the “Jim Morrison experience” – but also the subterfuge behind the scenes which has led to valuable live recordings being issued to the public. We’ve also touched in with Frank Lisciandro, a film-maker, UCLA contemporary and one of Jim Morrison’s closest friends, about The Doors on film. Frank is especially valuable to hear on the myths deriving from the 1991 Oliver Stone-directed Doors biopic. “Jim never looked over his shoulder and said ‘I feel like I’m being possessed by a Native American right now’,” he tells us.

Then, as now, audiences were ready to be entranced by Jim Morrison’s legend, and transported by The Doors’ music. John Densmore, though, is more down to earth about why the group continue to enjoy such influence: they were in the right place at the right time.

“Timing,” he says, “is everything to a drummer…”

Buy a copy of the magazine here. Missed one in the series? Bundles are available at the same location.