Keep on chooglin'! The full story of John Fogerty and CCR 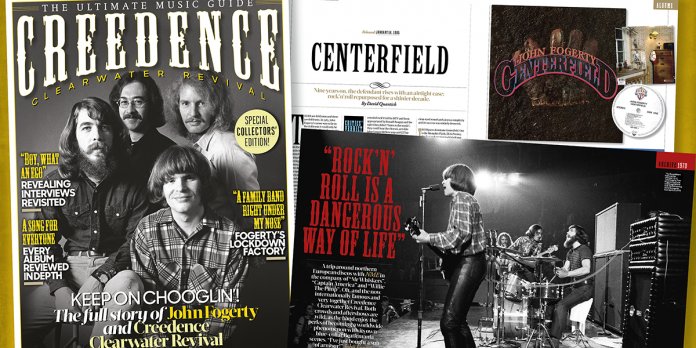 When I first picked up a copy of Willy & The Poor Boys in the 1980s, I’m not sure whether I ever got much further than “Fortunate Son”. The riff, the righteous self-definition, the rhythm driving the song forwards. It was excellent, and it seemed – to someone then far too uptight to choogle – to give me all I needed to hear.

Over 30 years later, it’s not unreasonable to think John Fogerty didn’t need to get much beyond “Fortunate Son” either. It forms the title of his autobiography, of course, and was one of the key battlegrounds on which his recent conflict with the former president of the United States was fought. It’s an urgent and passionate rock ‘n’ roll record, but also a faintly misleading one – it might sound raw, but it was anything but thrown together. Fogerty didn’t just write the songs: he gave out the parts, woodshedded his band, and also produced the records.

As you’ll discover over these 124 pages of new and archival writing about Fogerty and Creedence Clearwater Revival, this approach was the fuel for an 18 month hot streak in which many of his Creedence classics – “Bad Moon Rising”, “Proud Mary”, “Lodi”… the Dude-pleasing list goes on – were written. As contemporary reporters observe in these pages with a mixture of puzzlement and delight (“Bayou Beat” is one attempted definition of what the band are up to), the group became, in a world struggling to accustom themselves to their absence, a band as big as The Beatles were. As one contemporary observer has it in these pages: the place where The Beatles were trying to get back to is where Creedence started out.

How simple it all sounds. Fogerty’s relationship to his music, however, has proved a complex and conflicted one. As Creedence records sold in their millions, he jostled with other band members about his tight control of the music, and faced tough questions about his management of the group. His brother left the band. Having created joyful music, Fogerty began to question the terms he and the band were working under, the whole enterprise becoming intractably linked to poisonous business disagreements. After creating a one man bluegrass band, Fogerty effectively retired from music, not emerging until the triumphant Centrefield album in 1985.

His has been a unique journey, marked by periods of intense activity followed by long retreats and deep reflection on his work. In recent years, he has been revitalised by wife Julie and his family, which has lately culminated in his role as a rock Lord of Lockdown, and great Fogerty’s Factory record in which he revisits some of his Creedence classics in the company of his “family band”. His latest release, “Weeping In The Promised Land”, meanwhile, finds a blue collar American hero calling the powerful to account. As we speak, he is restless again, hard at work on preparing a new album.

Come with us, as we hitch a ride to the end of the highway.

The Ultimate Music Guide to Creedence Clearwater Revival is in shops now, or you can buy it directly from us by clicking here – with free P&P for the UK.