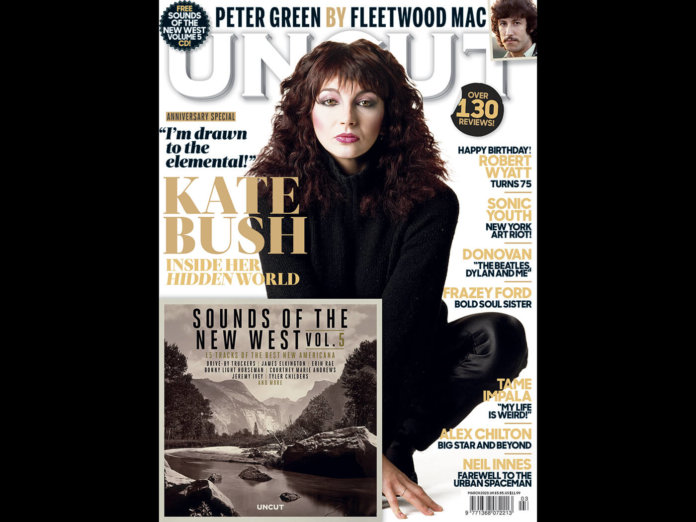 Among several profitable distractions during the festive break, I enjoyed following a Twitter thread about old Uncut CDs. Among praise for 2002’s Keith Richards-curated compilation The Devil’s Music and last year’s Wilco covers project, I was massively gratified by the positive vibes directed at our Sounds Of The New West series. Serendipitously, this issue of Uncut comes with the long-awaited fifth instalment; we sincerely hope it matches the high standards set by its predecessors. As ever, please let us know what you think.

It’s been 10 years, astonishingly, since Kate Bush last appeared on the cover of Uncut – which is in shops from Thursday but available to pre-order here. For this latest cover story, Peter Watts has dug deep into an early period in Bush’s remarkable career to locate the source of her singular, very English magic. Peter’s excellent piece shows how Bush’s idiosyncratic vision has been there right from the very start. To complement this, we’re pleased to run the unexpurgated transcript from Andy Gill’s 2011 interview with Bush, where she discussed her childhood and early success.

This issue of Uncut is full of similar celebrations of wayward, idiosyncratic brilliance. Tom Pinnock visits Robert Wyatt at home in Louth, Lincolnshire, where – later this month – the songwriter turns 75. For a man who ostensibly retired from making music in 2014, Wyatt remains as musically curious and engaged as ever, as Tom discovers over a slice of carrot cake or two. Then there is Peter Green – who these days, Rob Hughes learns, keeps his hand in with regular jam sessions in the front room of his house with close friend Bernie Marsden and one of his neighbours.

Elsewhere, we hear from “Legs” Larry Smith, who pays tribute to his fallen comrade in the Bonzos, Neil Innes. Big Star biographer Rob Jovanovic rounds up former bandmates and collaborators for an Alex Chilton Album By Album, to commemorate the 10th anniversary of his death. Neneh Cherry talks us through “Buffalo Stance” – one of the great debut singles – while Donovan shares stories from his colourful career.

Finally, we meet Frazey Ford in Portugal, to hear all about her excellent new solo album, U Kin B The Sun. Frazey’s presence in Uncut is part of our ongoing mission to tirelessly champion new records – and U Kin B The Sun is a great way to start 2020.