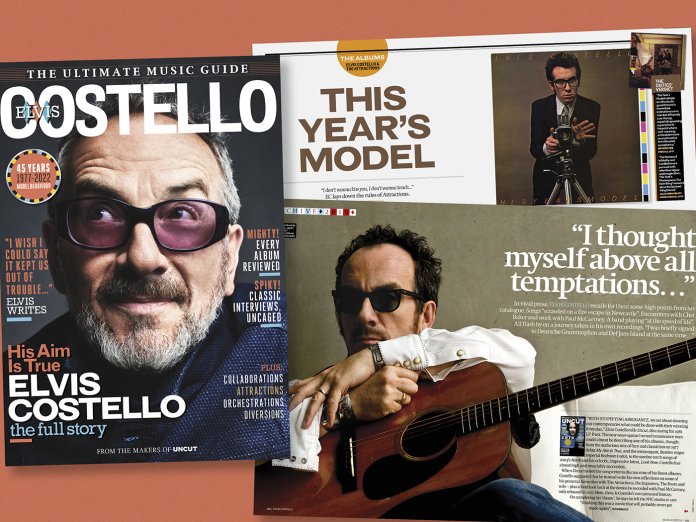 To the new wavers of ’77, Elvis Costello must have looked a straightforward proposition, a black and white world. Punk’s febrile, combative energies and the naïve excitement of golden age rock’n’roll and mod beat encapsulated in one bespectacled, legs-akimbo, skinny tied package. And so, for a short while, it would prove; as the arrival of The Attractions – and a pill-popping angry young man attitude – powered Costello on to the new wave front lines with This Year’s Model and Armed Forces, his aesthetic cohered around barbed and allusive dissections of pop culture, cutting social commentary and the politics of love and war. A critical darling, and not just because, as Dave Lee Roth bitterly attested, the sleeve of …Model was, for most journalists, like looking in a mirror.

In the 148 pages of this Deluxe Ultimate Music Guide, fully updated to account for his most recent activity, you’ll read some of Costello’s most memorable interactions with just those journalists. Here you’ll find spiky moments – “Getting it all down are you?” – and expansive encounters. Not to mention a full reckoning of the many recordings, collaborations and other adventures which caused them to occur in the first place.

Costello’s tale began to twist early on, and never reverted to formula for forty years. Get Happy!! arrived drenched in classic soul and R&B, looking like it’d been dusted off from the basement of the Twisted Wheel. A country album emerged, Almost Blue, fresh from Nashville itself. A swerve into lush, baroque art pop for Imperial Bedroom; another into brassy ‘80s pop for Punch The Clock, home to some of the finest deep cuts in alt-rock history in “The Invisible Man” and “Charm School”. The untamed unpredictability of Elvis Costello came to a head in 1986, the year he both premiered the beard on the sleeve of The Costello Show’s immaculately authentic country collection King Of America and arguably invented grunge on his unhinged junk rock masterpiece Blood & Chocolate, introducing his Machiavellian alter-ego and ringmaster of the Spinning Songbook tours, Napoleon Dynamite.

Since then there have been Celtic Beard Years, classical quartet collaborations, meetings of minds with the pop, blues and hip-hop greats, torch song collections, experimental electronic endeavours, country and jazz departures and plenty else besides. Costello has evolved from new wave’s sharpest rebel poet into a sonic polymath and onstage raconteur, not just one of the country’s finest songwriters but amongst its most adventurous too.

Throughout the decades, though, Costello has retained the will and ability to reconnect with that core punk attitude and fire out a firecracker rock record when the mood takes him – a Brutal Youth, a When I Was Cruel, a Momofuku. It’s been a skewer holding together a career that might otherwise fly off in a dozen directions, and spears through his most recent run of albums too in the shape of the cranky, incredible The Boy Named If.

An amazing journey for this Jack of all parades, then, and one comprehensively tracked through the pages. We hope you’re happy now…