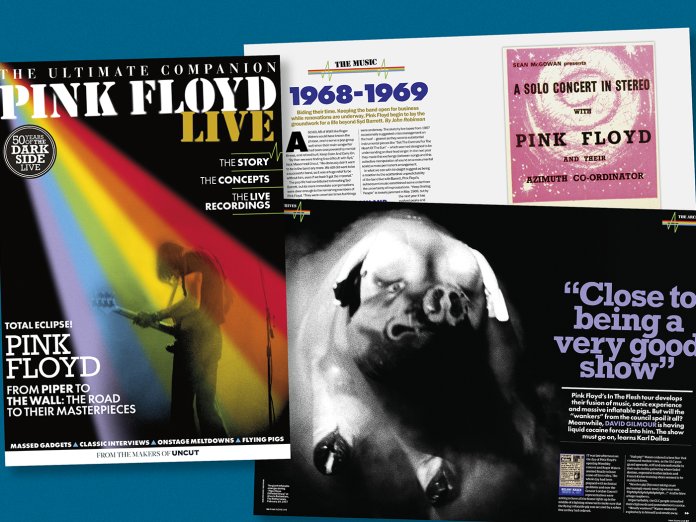 From the very beginning, Pink Floyd were thinking about how to make a show something more than a band simply playing songs. It was a mission that began with stroboscopic light experiments in the company of their landlord Mike Leonard, and concluded with the band erecting an enormous wall between themselves and the audience.

In between there were experiments. An enormous jelly. Frying bacon. Murmuring priests. An octopus, slowly inflating. Animated films. Oil lights and projections. A circular screen. Flying pigs. Flying sheep. As they explored ways to continue as a working band after the retirement of their singer and songwriter Syd Barrett, they moved beyond psychedelic songs into a place almost beyond songs – something more like a film soundtrack, designed to paint a mood on an epic scale.

In this struggle to find a way forward and to keep working, Pink Floyd made their live performances a laboratory for their grandest and most successful music. Songs from the classic albums Wish You Were Here, Animals and the whole suite of The Dark Side Of The Moon (performed live first just over 50 years ago) were first presented (sometimes falteringly; sometimes beset with “technical difficulties”) on stages in the British provinces.

It’s this creative evolution that we’re celebrating in this latest Ultimate Companion, one of our quarterly Special editions, designed to bring you closer to music you love. You might choose to think about the music we talk about here as rough prototypes for more streamlined studio version. Or you may, like us, come to think of them all as a noisy celebration of the creative process. If you dig them out, you’ll find astonishing versions of compositions you thought you knew.

That’s where we come in. Floyd spent a lot of time thinking about how they were going to present a show: the music, the show, the pyro and inflatables, even the placing of the intermission. So much so they don’t seem to have spent a lot of time curating hi-fi recordings of their performances.

So we’ve waded in among the live recordings from official to unofficial, to help guide you on Pink Floyd’s historic creative path – the tapes, the rarest songs, the thoughts of the eyewitnesses now they’ve had time to reflect. We’ve pulled back from the stage to bring put this all in the context of Pink Floyd’s imperial phase. From the archives, we’ve curated a selection of interviews illustrating what the band thought they were doing then, whether planning the perfect freakout, soundtracking a ballet that seems indefinitely postponed, or battling the “wankers” from the council who won’t let them turn all the lights out when they play.

As we learn from their inner circle, the band’s reluctance to stay in one place is the keynote of this secret history. “Roger was thinking ‘how can we better this?’,” Floyd creative director Aubrey Powell told Uncut. “It started way back at that Crystal Palace gig with that inflatable octopus. I think he realised that the audience appreciated something more than just the band.”

Settle back and enjoy the trip.