At 7pm on the first night of Atoms For Peace’s London residency, the Amok Drawing Room has already sold out of commemorative mugs. The Enterprise pub across the road from the Roundhouse has been rebranded in expressionist monochrome, and an upstairs room has been upholstered in Stanley Donwood wallpaper, the better to sell exquisite £500 prints, t-shirts screenprinted while-you-wait, and a pointedly apocalyptic jigsaw puzzle. 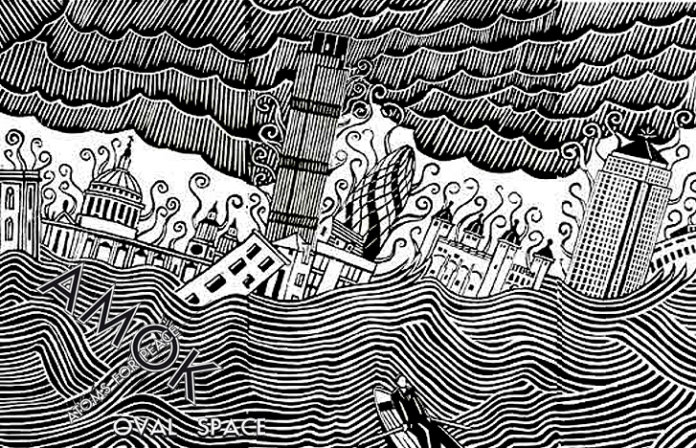 At 7pm on the first night of Atoms For Peace’s London residency, the Amok Drawing Room has already sold out of commemorative mugs. The Enterprise pub across the road from the Roundhouse has been rebranded in expressionist monochrome, and an upstairs room has been upholstered in Stanley Donwood wallpaper, the better to sell exquisite £500 prints, t-shirts screenprinted while-you-wait, and a pointedly apocalyptic jigsaw puzzle.

There are 12”s too, great racks of DJ-friendly vinyl that assert, boldly, how Atoms For Peace are embedded in the culture of dance and electronic music. Radiohead shows might still attract a rump of gig-goers who will be frustrated by the band’s focus on their 21st century music. These people do not, one suspects, come too close to Thom Yorke’s extra-curricular activities. Atoms For Peace represent the triumph of his latterday aesthetic, where his music can be finally untethered from those expectations and from the weight of Radiohead’s early legacy.

For those of us who only started really warming to Radiohead’s music around the time of “Kid A”, and who believe the band, together and apart, have gone from strength to strength with more or less every subsequent record, this is all good news. A sceptic might perceive Atoms For Peace as either a solo vanity project, or else a supergroup, chiefly thanks to Yorke’s recruitment of Flea, a gifted bassist whose creative brilliance so often comes with the caveat “…even if he is in the Red Hot Chili Peppers.” (Only Flea’s decision to highkick in a sarong hints at that band’s more dubious charms.)

As “Before Your Very Eyes” kicks into perpetual motion, though, the five members reveal themselves to be, essentially, a kind of ornate pararhythmical unit, with Joey Waronker and Mauro Refosco plotting endless percussion circles around one another, and Flea finding elaborate basslines that carry a lot of melodic as well as rhythmic thrust. There’s a weird parallel with Phil Lesh at times, albeit immeasurably funkier, in the way Flea takes charge of the spaces where, in more orthodox rock bands, lead guitar and keyboard lines might sit more prominently.

In Atoms For Peace, Yorke’s voice (all those epically wrought sighs and extended vowels) and guitar, and Nigel Godrich’s contributions on keyboards and guitar, mostly provide slow, ebbing melodies that slide over each other, ceding the foreground to a barrage of rhythmic intricacies. If “Amok”’s antecedents often suggested themselves to be the likes of Caribou and Four Tet, many of these songs tonight – “Default”, say, or “Amok” itself – have a dynamic that more closely resembles an older Yorke touchstone, Autechre.

It’s a structural comparison rather than a precise one, of course. If Autechre derived their beat science from hip hop and the electronic avant-garde, the roots of Atoms For Peace’s jitter and throb seem to be as much a sort of extrapolated worldbeat, of global learning being channelled and accelerated into a relentless techno cascade. So “Before Your Very Eyes” and “Stuck Together Pieces” are a sort of hyperdetailed Afrobeat – though it’s unclear whether a washboard, which is what Refosco seems to be playing on the latter – ever got much of a workout at The Shrine.

Refosco’s instrumental choices often provide a clue as to at least part of the influences on specific tracks. During “Unless”, he wanders into Flea’s performance space with a drum, for what might be a kind of batucada workout. For “The Clock”, he has a stringed gourd which brisk internet research possibly identifies as a berimbau, another hint of his Brazilian roots – though the song itself has a faint North African feel to it, too.

“The Clock” is one of six songs from “The Eraser” that are treated to the full band upgrade, austere digitalia given a skittering new complexity. The transition works brilliantly for the most part: “Cymbal Rush” and “Black Swan”, which close the main set and the encores respectively, are two of the show’s highlights; and only “Harrowdown Hill” misfires slightly, overdriven to the point where Yorke’s vocal line becomes frayed and strained, the whole construct a little too fragile to withstand the battering.

It’s a solitary miscalculation, though. In general, Yorke’s gauzy melodies prove a lot more robust than they first appear, and if the percussive assault visited upon Satie-esque piano figures in “Cymbal Rush” and “Ingenue” on one level seem perverse – a calculated attempt to undermine Radiohead’s sombre prettiness, perhaps – it’s also immediately, pulverisingly effective.

Ironically, the most becalmed part of a frantic night comes when Yorke exhumes his first (if memory serves) public negotiation with electronica; “Rabbit In Your Headlights”, a DJ Shadow collaboration from Unkle’s bloated and mostly ghastly “Psyence Fiction” album (1998). Out of its original context, “Rabbit…” turns out to be a decent song, even if it feels like Yorke is rootling around to find anything but Radiohead songs to play (One piece of Radiohead marginalia, “Paperbag Writer”, has found its way into some Atoms For Peace gigs, though it’s been literally struck off tonight’s setlist). There are also two fine songs from the 2009 solo single, “The Hollow Earth” and “Feeling Pulled Apart By Horses”, the latter recalling – probably thanks to the massive bassline of Flea, a noted post-punk/punk-funk scholar – 23 Skidoo.

Before they play “Feeling…”, Yorke makes a droll aside, the gist of which is that they’re going to make a “workout video”. The prospect seems reasonable, actually, given that Yorke, with topknot, vest and taut demeanour, looks very much like a yoga instructor (a bikram specialist, maybe, given the venue temperature). Yorke’s interpretive dancing has sometimes seemed an odd, even uncomfortable mixture of the self-conscious and the abandoned, but tonight it feels more forceful and necessary; an essential physical response to the orchestrated frenzy of the band’s music.

It also reflects a sense that Atoms For Peace’s music is exhilarating and liberating, while always following its own fastidious set of rules – even when those rules are being processed with an astonishing, breakneck fluidity. At the centre of it all, Yorke has every reason to feel proud and fulfilled: a pan-global techno yogi, achieving transcendence through discipline.