An interview with Pete Townshend: “I might retire… from making money…”

Plus the future of The Who, memories of Moon and Entwistle and his rocky relationship with Roger Daltrey

This weekend, The Who’s splendid 50th anniversary tour reaches the climax of its UK leg, with celebratory shows at both London’s Hyde Park and Glastonbury. To coincide with these momentous events in the Mod calendar, I thought I’d post my Pete Townshend cover story from the June 2015 issue of Uncut. It was the fruits of a digressive, two-hour interview – which took place in a hotel over the road from his home in Richmond – where Townshend spoke candidly about his complex relationship with both The Who and his bandmate, Roger Daltrey. 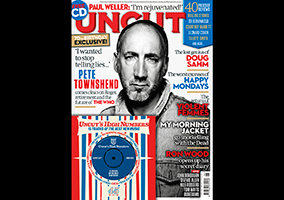 As he prepares to ignore his 70th birthday, PETE TOWNSHEND is considering his options. There is THE WHO’s ongoing tour, and a new orchestral version of Quadrophenia to occupy him. But Townshend also longs to escape the “immense, monolithic money generator” he has been tied to these past 50 years. In this startling new interview, rock’s most candid genius reflects on Entwistle and Moon, on Page and the Stones, on dying at Steve Strange’s club and on his still tempestuous relationship with Roger Daltrey. “There’s a desire I have to do a show which is crap. Go out in front of a bunch of devoted Who fans and say, ‘Listen, you bunch of fucking cunts. Fuck off. Don’t come back…”

“I’ve always had this feeling, ever since I came out of art school,” begins Pete Townshend, as he slowly stirs a mug of tea with a spoon. “The decision I made was, ‘I’ll fuck around with this stupid, horrible little band for a year, get a hit record, and then I’ll go back to rooms full of beautiful, intelligent women who didn’t mind that I had a big nose.’ But of course, that didn’t happen.” He looks up from his tea, a smile playing at the edges of his mouth. Today, Townshend is in a reflective, if mischievous mood. Dressed in a white t-shirt, black jeans and blue slip-on shoes (no socks), he sits in a hotel suite at the top of Richmond Hill. Directly across the road is The Wick, the Georgian house overlooking the Thames that Townsend bought in 1996 from Ron Wood. It transpires that the former owner is still a frequent guest. “He knocked at the door on Christmas Day,” Townshend reveals. “He often does…” Townshend has lived in the borough since 1967, when, as a newlywed, he and his wife Karen Astley settled in nearby Twickenham. Of course, much has happened in the intervening decades, both to Townshend himself and that “horrible little band”, The Who. On this unseasonably warm day in March, Townshend has plenty on his mind. There are The Who’s ongoing 50th birthday celebrations – marked in June by a show in London’s Hyde Park – as well as a dizzying number of archival projects. The band’s studio albums have recently been reissued on vinyl along with the first of four 7” singles box sets, while there is talk of a comprehensive Who box set to come later this year. Townshend’s own solo albums are also being released digitally, with deluxe physical editions to follow. Additionally, Townshend is contemplating taking on yet another project. “I’ve been committing some of my early demos to tape,” he confides, “and from tape to computer, to see whether I could put a collection together.”
Townshend has always been prone to tinkering. The two mainstays of The Who’s back catalogue – Tommy and Quadrophenia – have both been the subject of substantive reissue programmes and several bespoke tours. But lately Townshend – in conjunction with his partner, Rachel Fuller – has revived his enduring anti-hero, Jimmy the Mod, in perhaps his most unlikely guise yet: Classical Quadrophenia, a symphonic reimagining of Townshend’s Sixties-set yarn recorded with the Royal Philharmonic Orchestra that receives its world premier at London’s Royal Albert Hall in June, with an album on the classical label, Deutsche Grammophon. And there is more to come, Townshend reveals: “The Young Vic are working on a project at the moment to do Quadrophenia at the Roundhouse in 2017.”
Townshend sees his tendency to return to these greatest triumphs as part of an ongoing discourse with the work itself; a sense that whatever he does, it is never quite complete. “It’s like a certain kind of diary journalism,” he explains. “You respond to something that’s happening out there in the world, and you start a dialogue. Tommy was like that. Quadrophenia didn’t end. I realize a lot of my stuff didn’t end. When you listen to some of the key songs, like ‘I Can See For Miles’, ‘Pictures Of Lily’, ‘My Generation’, ‘Pinball Wizard’, ‘Behind Blue Eyes’, these are not songs with conclusions. They’re almost like cameos which end up with more to do when you’re finished listening to them than when you started.”
But for all Townshend’s attempts to codify and finesse his past, there are other, present-day concerns that require his attention. In the middle of all these reissues, box sets, anniversary gigs and classical engagements, Townshend turns 70 on May 19. “It is,” he says with commendable understatement, “an interesting year.” He has no particular plans himself to mark this auspicious date – “Other people are, but I’m not.” In fact, he’ll be on tour in America, somewhere between Philadelphia’s Wells Fargo Center (May 17) and the Nassau Coliseum (May 20), on the first leg of what he confirms is The Who’s final large-scale arena tour. “Touring is an ordeal,” he says. The question ‘What next for The Who?’ looms large during our two-hour interview. Will there be more new music? Will they ever play live again after this year? And what is the current state of his relationship with Roger Daltrey? As he reaches such a landmark age, will Townshend retire? Townshend helps himself to another cup of tea (PG Tips, skimmed milk, one sweetener), and prepares to answer all these questions – via a number of often fascinating, sometimes infuriating digressions that take in EastEnders plot points, his Sixties peers, “dying” in Steve Strange’s Blitz club and the Charlie Hebdo killings as well sharing fond memories of his fallen comrades, Keith Moon and John Entwistle.
“You just never really know what’s going to happen, but it’s always very satisfactory. Grim, but satisfactory.” He is taking about EastEnders; but it seems a particularly apt description of another, esteemed and long-standing soap (rock) opera: The Who.