An interview with Cian Nugent

Cian Nugent & The Cosmos’ “Born With The Caul” is one of my favourite albums of the year, as I tried to explain as part of this blog from a month or so back. The album came out this week, anyhow, so I thought it was worth posting this Q&A with Cian here. Some really nice stuff on his influences, especially… 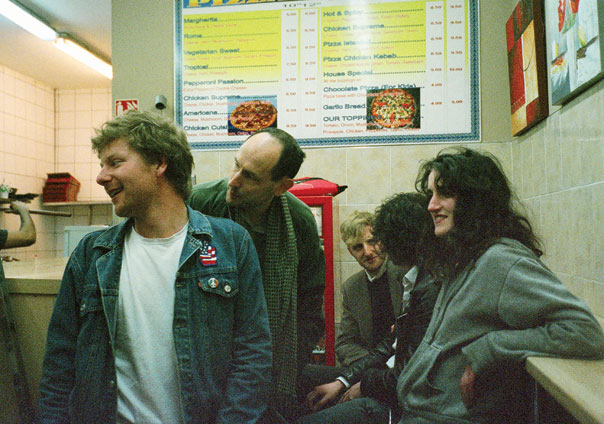 Cian Nugent & The Cosmos’ “Born With The Caul” is one of my favourite albums of the year, as I tried to explain as part of this blog from a month or so back. The album came out this week, anyhow, so I thought it was worth posting this Q&A with Cian here. Some really nice stuff on his influences, especially…

Why did you decide to switch to an electric band for this album?

In short for the joy of playing with a band! It was a pretty natural development from the last record where I got together a band to play the stuff live. We played a bunch of gigs and after some personnel changes we settled into a band lineup. David Lacey, the drummer, and I had been jamming some new stuff together and I was trying out playing more electric stuff and the material just developed from there. This record was really fun because about half the material we came up with all together as a band so it has way more of a group feel.

Can you tell us a bit about the other musicians in The Cosmos?

The band is me, David Lacey playing drums, Ailbhe Nic Oireachtaigh playing electric viola, Conor Lumsden playing bass and Brendan Jenkinson playing organ. We’re all good friends and just seem to work well playing together. David and Ailbhe played on my previous record, so we already had a group dynamic. David and I have been playing together for about five years, we used to just do duo stuff. He’s one of the best musicians I know, he’s very musical but also very irreverent.

On this new record Ailbhe is stepping out more, sharing leads with me, which is great as she’s a wicked player. She’s really come in to her own as a player in the past few years. Conor’s one of my oldest buddies. He learned the whole set the day of his first gig with us, which was actually two gigs in one night, the first of which was opening for the Magic Band. Just before we went on Rockette Morton came over and sat down next to us and said, “My name’s Rockette, how you doing?” An intimidating start. Conor looked terrified for the whole set but sounded great. His playing is great, pins everything down but also has a lot of flair. He brings a lot of the glam to the group.

Brendan started out playing bass for a whole when Conor was living in England, and he’s on the “Hire Purchase” seven-inch, which he also recorded. Now he’s playing organ and I really love what he does, he has a great sense of harmony and gives things a real magic.

I wrote in a blog a while back that the album felt as if it operated in the space between “Marquee Moon” and “A Sailor’s Life”; did that make sense to you?

Definitely those two songs are big ones for all of us. The guitar solo in “Marquee Moon” is one of my favourite pieces of music ever! I love how clean the guitar tone is and how it still really screams. And on “A Sailor’s Life” the same, I love how with both Tom Verlaine and Richard Thompson their playing is bluesy but not blues, if you get me, there’s something not typically American blues rock about it. My friend Matt Baldwin calls it Celtic Blues, which I think kinda gets it. As Iggy Pop said about Neu!, “free from the tyranny of blues rock and roll”. I think there definitely must have been some influence on Tom from Richard, I hear a lot of Jerry Garcia too and maybe some Roger McGuinn too? Also a big inspiration for us is the interplay between the guitar and violin in the Fairport stuff, how they are trading leads and both stepping out.

Were there any specific records that influenced the sound of “Born With The Caul”?

The ones you mentioned, “Marquee Moon” and “Unhalfbricking”, for sure are big influences, some of our favourite records. Some other big ones would be “Easter Everywhere” by The 13th Floor Elevators, “Radio City” by Big Star, all the The Velvet Underground albums particularly the live stuff, all the electric Popol Vuh albums, the first Hendrix album, “Live/Dead” by The Grateful Dead, “Dropping The Writ” by Cass McCombs, live Allman Brothers stuff, Sonny & Linda Sharrock’s “Black Woman”, “Future Blues” by Canned Heat, all the ‘60s/’70s Neil Young and Crazy Horse albums. “Maggot Brain” by Funkadelic, an Azerbaijani sax player called Edalat Nasibov. Other inspirations were seeing some great gigs over the past few years: The Family Elan, Gunn Truscinski Duo, Cass McCombs, Thee Oh Sees, that enough?!

Also, it feels like a record which consciously moves beyond American Primitive music/psych-folk etc to incorporate some Celtic textures and influences (it makes me think a little of The Waterboys, perhaps crudely, and maybe The Dirty Three as well). Is that in any way true?

Interesting to hear you say about The Waterboys, to be honest I’ve not really sat down and listened to their stuff but have always liked what I’ve heard of them growing up, I remember years ago seeing them on TV and liking the violin playing a lot. Similarly for The Dirty Three ,I’ve never listened to their albums, but always liked what I’ve heard. People have been saying that to me for a few years that we sound like them, so I finally got to see them last year and they were great. I do love a lot of folk music from Ireland and Britain; Nic Jones, The Watersons, Tommy Potts, Anne Briggs, Bert Jansch, that Paul Brady and Andy Irvine album, that one has become a big one for me in the past few years. I think a touch of that has always been in my music, but yeah, maybe has come to the fore a bit more on the new record. None of us really know how to play trad, but I think we all like it.


Do you feel part of a community with Steve Gunn, Chris Forsyth, William Tyler etc? What do you think has prompted the emergence of what feels, without being too reductive, a bit of a scene?

I do really like what those guys are doing and I really like them as people too. I hadn’t thought of it as a scene before but I guess it kinda is, we all live in different places, and i always think of a scene as being in one place. But hey, fuck borders. I definitely feel a musical kinship with them in that we all are playing guitar and trying to do something new with it drawing on a bunch of similar influences. Also really like what Matt Baldwin, Ryley Walker & Daniel Bachman are doing!

Any more Desert Heat work planned? Or other collaborations? Do you have an idea what 2014 will hold?

I would love to do more Desert Heat stuff, though there is an ocean between us, no metaphor intended. Hopefully we’ll all be in the same place sometime soon and be able to do something. As far as other stuff goes, I’ve been working on a new band here in Dublin called Cryboys with Dylan Phillips from an excellent Irish band called Dinah Brand, David Kitt and Ruan van Vliet. We’ve been playing for about a year now, really been enjoying it. My first song band where I’m writing songs and singing, which is a buzz. So hopefully we’ll make this record we’re cooking. Also I’ve been playing with another band here in Dublin called The #1s which is a kinda punk/power pop band and we’ve had a few singles out, but hopefully in the next year we will work on an album too. Also aim for some Cosmos touring and to start work on some new tunes too!


Oh yes, could you explain the title for us, too?

Well my friend Grace’s Auntie Ellen runs this Mythology Summer School on Clare Island and Grace has lots of good mythology stories, so she told me the story of the mythological character of Cian, who I heard was born with the caul. I didn’t know what it meant but liked the sound of it so looked it up and was disgusted by Google Images, but really liked the folklore around It. What it means is that some babies are born with a piece of membrane around their head, it’s quite rare. And traditionally it was considered a sign of good luck, that the baby was destined to greatness. People would keep the piece of membrane and give it to sailors as a sort of talisman to keep them safe at sea. Traditions differ all over the world, but it seems to be treated with some significance everywhere. So one day I asked my mother, had she ever heard of this tradition and she quite calmly said “oh yeah you were born with the caul, I kept it for a while but it’s been lost somewhere along the way.” So it seemed a pretty good title for the record.


Update 15/11/13: I’ve compiled a Youtube playlist of other songs in the “Marquee Moon”/”Sailor’s Life” interzone that you can watch here.