By its very nature, garage rock can be a trashy, erratic business - inevitable given the unbridled spontaneity it privileges. One of the many amazing things about Ty Segall and the ever-expanding circle of artists around him, however, is how they've found a way of adding consistency to the volatile mix of productivity and excitement. 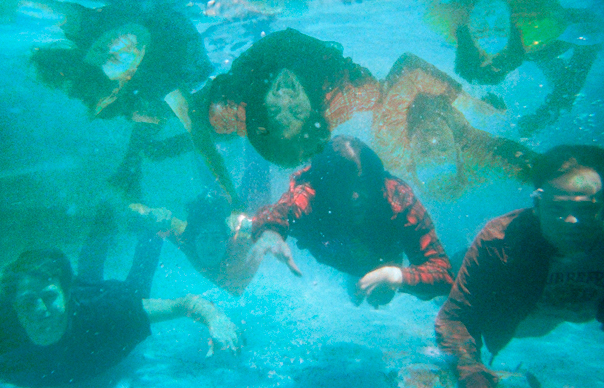 By its very nature, garage rock can be a trashy, erratic business – inevitable given the unbridled spontaneity it privileges. One of the many amazing things about Ty Segall and the ever-expanding circle of artists around him, however, is how they’ve found a way of adding consistency to the volatile mix of productivity and excitement.

There are times when it seems Segall is congenitally incapable of being involved with a duff record, or even a scrappy one. So while in the past few months his own “Manipulator” has taken most of the plaudits, there’s also been an album on Segall’s God? label by an LA band called Wand that deserves some attention, too. “Ganglion Reef”, it’s called, and it configures plenty of their benefactor’s favourite modes of garage rock – brutish Blue Cheer riffs, dappled psychedelic whimsy – into moderately fresh, often terrific new shapes. The likes of “Clearer” and the outstanding “Fire On The Mountain (I-II-III)” smuggle in fey and ornate acid pop under the cover of lurching stoner rock: Pink Floyd’s “Nile Song” feels like a useful, relatively underused reference point. Good drummer, too.

Now, as well, there’s a self-titled album from Meatbodies (pictured above) on In The Red, featuring Segall but focused on one Chad Ubovich, part of The Fuzz and sometime guitarist in Mikal Cronin’s band. Again, surprises are reassuringly thin on the ground, but the quality of Ubovich’s psych-tinged ramalams, mostly delivered at Ramones speed, is high. If you’re looking for a specific Segall analogue, “Meatbodies” fits well alongside 2010’s, “Melted”, quite possibly my favourite of his albums. But on the thrumming, pinched “Off”, it also feels like Ubovich has been listening pretty intently to recent Oh Sees records. No bad thing, obviously.

Also listening to Thee Oh Sees, I suspect, are King Gizzard & The Lizard Wizard on their “I’m In Your Mind Fuzz” album, which John Dwyer is releasing on Castle Face in the UK (Heavenly are doing the honours in the UK). I must confess, I didn’t play this one for a while, finding the wacky name pretty offputting, but King Gizzard turn out to be an Australian band locked into the same streamlined hypnobeat that Thee Oh Sees perfected on “Floating Coffin”.

The album starts as if it’s going to keep going as more or less one song (notionally divided into four tracks, including “Cellophane”) for its duration, which might have made it even more fun; the boggle-eyed momentum drops off a little. Still, that would’ve meant the excellent “Hot Water” and “Empty” would’ve gone missing, two songs that both have the good taste to resemble the early Kraftwerk’s optimum flute jam, “Ruckzuck”. There’s a nice fake of ’70s Turkish pysch in the shape of “Satan Speeds Up”, too, or at least its first minute or so.

One last entry in this week’s garage rock round-up: “A Swirling Fire Burning Through The Rye”, the second album from San Francisco’s Cool Ghouls (another not-terribly-encouraging name, there, but stick with it). “I’m trying to understand these times we are living,” notes one of the band’s multiple lead singers, Pat McDonald, in “Reelin'” and Cool Ghouls, it transpires, are an SF group riding a timewarp, singing about the tech-driven gentrification of their city in the style of their mid-’60s forebears.

This second, much-improved, album paints them as a jangling beat group, with three harmonising frontmen making tentative forays towards a new frontier: Byrds-style raga rock, perhaps (“Insight”); or a Beach Boys-style hook-up with The Wrecking Crew (the outstanding “The Mile”)? Exceptional tunes ensure A Swirling Fire is more substantial than a nostalgic art project – given the right push, Cool Ghouls could be as big as Moby Grape, or at least The Allah-Las…