Down but not out: Wilko revisits his catalogue in good company... 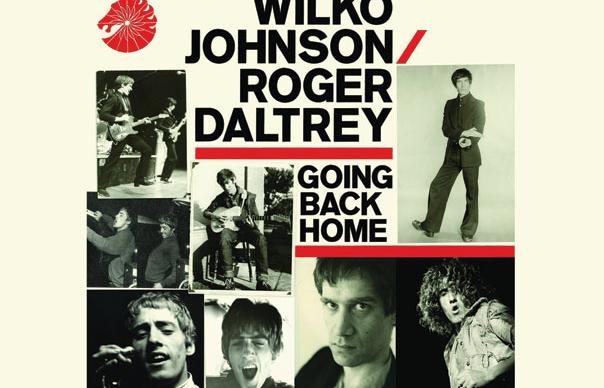 Down but not out: Wilko revisits his catalogue in good company…

It would be impossible not to feel distress at the prospect of losing Wilko Johnson, who was diagnosed with terminal cancer in January 2013. An equally understandable reaction would be to seek solace in those fizzing early Dr Feelgood records and recall with rheumy-eyed nostalgia the youthful verve of a life lived to the full and now drawing to a close. But Johnson himself has favoured a more practical approach. Told that he had only months to live, he resolved to make the most of his time and headed out on the road for a tour that everyone – including Wilko and his doctors – anticipated would be his last. When he confounded medical science and was still around to see in 2014, he declared that he’d had “a brilliant year” and announced another tour, taking in dates in both Britain and Japan.

In between these intended farewells, last November he went into the studio with Roger Daltrey to record Going Back Home. If there is an intimation of mortality in the album’s title, there is no hint of in the music, which is vibrant and vigorous with all its vital signs pumping. Recorded in a tiny studio in Sussex near Daltrey’s country estate with Johnson’s touring band of Blockheads bassist Norman Watt-Roy and drummer Dylan Howe, the sessions were concluded in seven days. The briskness may have been partly enforced by the knowledge that the sands in Wilko’s hourglass are running out; but in truth it was all the time two such seasoned old pros needed to crunch their no nonsense way through a collection of ten Johnson originals from his Dr Feelgood days and solo years, plus a robust take on Dylan’s sardonic “Can You Please Crawl Out Your Window”.

The idea had been vaguely kicking around since Daltrey and Johnson found themselves sitting together at an awards ceremony in 2010. Bonding over a mutual admiration for Johnny Kidd & the Pirates they mused that it would be a wheeze one day to collaborate on a raw and unvarnished old-school r&b album. Such conversations, you’d imagine, are not uncommon and are usually soon forgotten, the muso’s equivalent of ‘let’s do lunch’. Three years later they still hadn’t broken bread when Wilko’s grim diagnosis seemed to confirm they never would. But when Daltrey had finished with the Who’s 2013 tour and found that Wilko was not only still around but ready to roll, realising the project took on a sense of urgency.

It’s a collaboration that makes perfect sense for there is a maximum r&b shiver that runs down the backbone of three generations of British rock’n’roll from the Pirates to the Who to the Feelgoods, constructed around a traditional powerhouse guitar/drums/bass trio fronted by a charismatic and characterful lead singer.

Daltrey’s full-throated roar on the Pirates’ 1960 hit “Shakin’ All Over” was a showpiece of the Who’s set when Johnson saw the band as a student in the late ’60s. Six years later, Johnson teamed up with the Pirates’ guitarist Mick Green to write “Going Back Home” for the Feelgoods’ second album, ’75’s Malpractice. The song makes for a talismanic opener and title track, Johnson’s trademark choppy chords and tough, terse solos sounding as invigorating as ever. Daltrey, consciously or not, adopts a clipped, deeper register closer to Lee Brilleaux’s muscular r&b growl than his familiar Who rockisms and adds wailing blues harmonica to several tracks, including the Dylan cover. Feelgood classics “All Through The City”, and “Sneaking Suspicion” and the title track from Johnson’s ’81 solo debut Ice On The Motorway are stirringly revived, as is the rockabilly-tinged “Everybody’s Carrying A Gun” from Johnson’s under-rated post-Feelgoods ’78 album with the Solid Senders. Not so much a last will and testament. More a case of business as usual, for as long as he still can.
Nigel Williamson

Q&A
WILKO JOHNSON AND ROGER DALTREY
How did you chose the material?
ROGER: Finding out Wilko’s condition, I just said to him ‘you chose the songs and I’ll have a go at singing whatever you throw at me’. It was all done in a real rush. But so much modern music is over-polished and this album has a freshness. Fast, three-minute r&b songs. No bullshit. Just great songs.
WILKO: Imagine Roger Daltrey saying to you, ‘I’ll sing whatever you like’. So I took advantage…

Did you feel you had to work so fast because there wasn’t much time left?
WILKO: Well I was meant to be dead in October! I accepted it. I wasn’t going to fight it and decided I’d just enjoy my time. But it’s going on and on and having gone past October, now I don’t know. I haven’t been back to the doctors since last year when they said I’d be dead in eight months.. My spirit has been very good. Making the record I thought ‘this feels really nice. I’m really sorry I’ve got to die because I want to do a lot more of this. It was a great atmosphere.’

What do you take from the project?
ROGER: I’ve such admiration for Wilko. I think in some ways our post-war rock’n’roll generation taught people how to live and enjoy their lives. Now here’s Wilko showing us how to die. We should learn be more accepting of the reality of death.
WILKO: Death ain’t so bad, you know…
INTERVIEW: NIGEL WILLIAMSON