Various Artists – Dark Was The Night

Generation-defining comp of the grand-children of college rock. 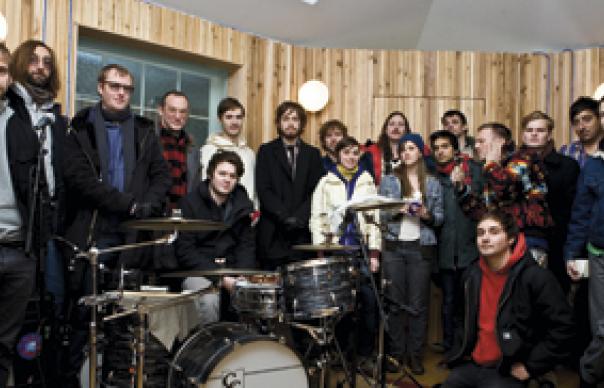 Back in 1993 with grunge at its height, the Red Hot Organisation’s AIDS fund-and-awareness raiser compilation No Alternative seemed to capture a generation coming of age. The record featured contributions from Smashing Pumpkins, Sonic Youth, The Breeders, and, in the kind of commercial contradiction that so tormented them, a song by Nirvana – “Verse Chorus Verse” – that their record company insisted could not be listed on the album sleeve.
But amid stiff competition, the stand-out track was “Unseen Power Of The Picket Fence” by Pavement. In his ramshackle, elliptical way, Stephen Malkmus paid tribute to REM (“Southern boys, just like you and me”), harking back to the days of the “Chronic Town” EP, and even imagining an alternative pop prehistory where Buck, Stipe, Berry and Mills stood up to the might of Sherman’s Confederate army.

Obliquely, amusingly, it defined the “alternative rock” generation as the cultural children of those first inklings of college rock in early-’80s Athens.
Sixteen years later, the latest Red Hot comp rounds up the grandchildren. Compiled by Aaron and Bryce Dessner from The National, the two-disc, 31-song tracklisting of Dark Was The Night reads like a roll call of US indie rock of the last five years, a scene that’s burgeoned from the 2004 debut of the Arcade Fire (who contribute a new track, “Lenin”) to the overwhelming success of last year’s critics’ darling Bon Iver (who donates “Brackett, WI”, plus a spontaneous collaboration with Aaron, “Big Red Machine”).

The comp seems to have had two major inspirations. The first was Red Hot founder and DWTN Executive Producer John Carlin’s sense that a lot of these younger indie kids seemed to be practically chamber orchestras, putting a baroque 21st-century spin on American roots music. And the second was Feist’s appearance on Letterman a couple of years ago, where she assembled a scratch backing choir comprising members of The National, The New Pornographers, Grizzly Bear and Broken Social Scene – the real tipping-point moment when, according to Aaron, the sense of a scene or a movement – the kind of thing musicians love to deny to trend-chasing journalists – seemed undeniable.

However, even Hegarty’s startling voice struggles to escape what you might call the generic gravity of the record. Listen to successive tracks by Feist, Bon Iver, Grizzly Bear, Yeasayer, Decemberists, Iron & Wine and the repeated force of the folksy plucking and briney voices can prove almost overwhelming. This is the polite, less freaky end of modern American indie folk: earnest, well-intentioned, Obama-fundraising, National Public Radio-supporting… and cumulatively a little dull. Even the Arcade Fire can’t quite get the party started: “Lenin” is a rumbling, oddly low-key number, recalling The Beatles’ late attempts to get back to their rock’n’roll roots.
But such an extensive, stellar lineup can’t fail to hit the mark and Dark Was The Night features some real highlights, notably The National’s own track, “So Far Around The Bend”, augmented by a wonderful woodwind and string arrangement by classical wunderkind Nico Muhly, and Sufjan Stevens’ sprawling pan-genre odyssey through Castanets’ “You Are The Blood”.

But best of all is “Knotty Pine”, a collaboration between Dirty Projectors, and David Byrne, who provided the lyric – “Here is the sound that photographs make/When I see them when I hear them/I see regions of sharp precision/Over-abundance /Overindulgence” – from an old scrap he’d held onto since the early days of Talking Heads, and suggested lead Projector Dave Longstreth come up with a new setting. The project seems to have energised both parties – Byrne sounds thrilled to be jamming with the new arthouse set, while The Dirty Projectors seem inspired into rare focus, their beguiling tangents resolving into something resembling a pop song. But more importantly, like Pavement paying homage to REM back in 1993, it suggests that college rock can still find fresh inspiration in returning to the old school.

How did you hook up with Red Hot?

I actually worked for John Carlin from Red Hot in New York, at his design company. And I was playing music on the side and leaving all the time for little tours, and he was nice about it, and we bonded over it. He was always cool about me taking off. and when The National finally got big enough that we didn’t need to have a job, he was very supportive of us leaving – and that was kind of when the idea of trying to do a Red Hot record came up.

Did you intend to document a scene or movement?

When people used to ask us this question, we used to say we live in a little vacuum and we make the songs we make, we’re not part of a scene. And that was true back then. I think now, what we’ve found is by touring, your friends more and more become the people whose music you’ve listened to for years. Things come together when you’re out at festivals. And we discovered trying to make this record that people are willing to go the extra mile.