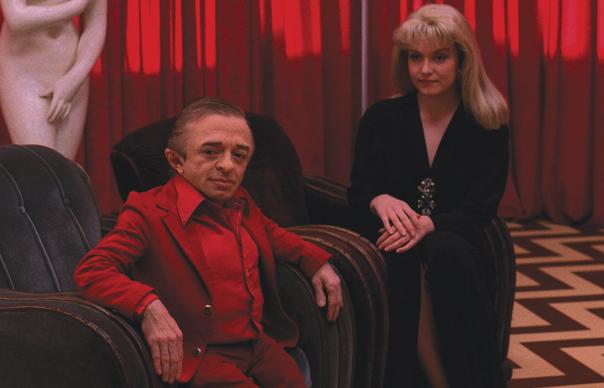 Among the many new DVD Extras on this anniversary edition of Twin Peaks is a featurette in which David Lynch interviews the ill-fated Palmer family in the present day. “Leland, you’ve been dead for 25 years now,” he says to the late Mr Palmer. “I’d like to ask you how things are for you now.”

Welcome back to Twin Peaks! If anyone had forgotten quite how peculiar David Lynch’s estimable TV series was, then that is the kind of useful reminder that ticks a number of significant boxes. Of course, if ever a TV series was ahead of its time, it was Twin Peaks. Launched in 1990 by David Lynch and co-creator Mark Frost, the show’s bizarre confection of small-town melodrama, macabre whodunnit and otherworldly surrealism carved out a legitimate place for darkness and the out-and-out bizarre in the American mainstream. You can trace its legacy in series from Lost through American Horror Story to True Detective, not to mention the very Peaks-ian New Zealand mystery show Top of the Lake, by Jane Campion – one of a host of A-list auteurs (Scorsese, Spielberg, Soderbergh… Bay?) who might never have turned to long-form TV if Lynch hadn’t blazed the way and made the format prestigious.

Released to celebrate the show’s imminent twenty-fifth anniversary, this handsomely packaged new 10-disc Blu-Ray box will get long-term admirers and newcomers alike brewing up the joe for late-night watching sessions. The best news is that Lynch himself is involved not only as executive producer but as master of ceremonies. Among the new material is the uncut 55-minute version of ‘A Slice of Lynch’, in which the director shares memories and cherry pie with stars Madchen Amick (or ‘Madgekin’, as he insists on calling her), Kyle MacLachlan (Agent Dale Cooper, as was) and sidekick/producer John Wentworth. There’s a lot of cosy stuff here (“You are a really great human being” – “Thank you!”) and some typically nutty incidentals (“Madchen likes soya milk,” Lynch reveals. “Me, I like whole milk”).

More bizarrely is the featurette where Lynch not only chats with the three actors who played the ill-fated Palmer family but also, utterly poker-faced, interviews them in character as the . The latter item comes across slightly as a self-indulgent actors’ exercise, but anyone who relishes the inimitably weird presence of Grace Zabriskie, rest assured that the erstwhile Mrs Palmer hasn’t lost her knack for crazed stares. And it’s poignant to see Sheryl Lee today, aged 47, a quarter of a century after Laura Palmer’s angelic corpse features became so iconic.

Also included is Lynch’s 1992 feature Twin Peaks: Fire Walk With Me, generally panned on release. The film baffled Lynch’s cinema fans and the show’s devoted public alike because it so wilfully defied categorisation. It was neither a conventional spin-off nor a straight prequel, more a sort of expanded parallel version or cubist remix of the series. But retrospectively, in the light of Lynch’s subsequent Mulholland Drive and Inland Empire, we can appreciate the film’s baleful anti-logic on its own terms. A new documentary on the film offers such insights as one actor explaining that his character was meant to be “a talisman come to life”. Which makes MacLachlan’s comment that Fire Walk With Me was an attempt to “make a little sense out of the series” seem like the richest joke ever.

Frustratingly, at time of review, the box’s ninth disc was being kept under a seal of secrecy – it contains ‘The Missing Pieces’, nearly 90 minutes of deleted and alternate scenes from Lynch’s feature, with an epilogue following on from the cliffhanger finale that so frustrated fans at the end of the series’s second season (not least because there was never a third season). ‘The Missing Pieces’ may well turn out to explain some long-unsolved mysteries of both the show and the movie (like: what exactly was David Bowie‘s vanishing FBI man doing in Argentina?) – but don’t count on it.

Meanwhile, you can distract yourself with assorted other ephemera – including ads for the series’s plot catch-up phone line, intros from the cosily enigmatic ‘Log Lady’, and ad break announcements from sheriff’s receptionist Lucy. Some of this has been packaged before, but new material includes ‘atmospherics’ (including loops of those jazzy drums that accompanied the show’s donut-eating sessions), out-takes and some deleted scenes that are every bit as Lynchian as you’d expect: “…and one plum frappé turnover!”