Tune-Yards – I Can Feel You Creep Into My Private Life 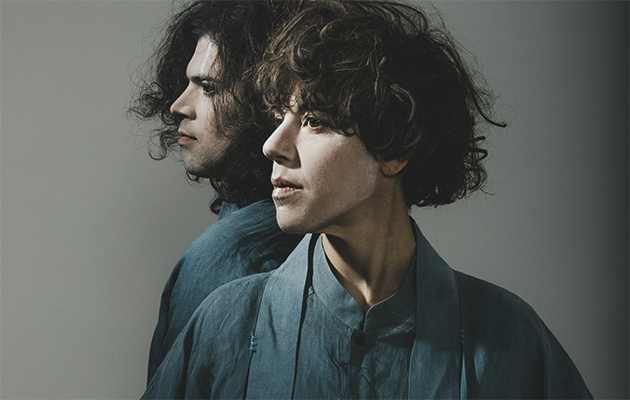 In a piece Merrill Garbus wrote for Talkhouse in 2013, about her trip to Haiti to take drumming lessons plus folkloric and contemporary dance classes, there’s an aside that speaks not only to Nikki Nack, her album of the following year, but also to a clear future path. “I am not a dancer so much,” she admits, “but these days I will dance harder than I ever have in my whole life.” What was then a simple commitment to participate fully in that programme (despite some reluctance), now reads like a passionate affirmation of her belief in dance music as a connecting life force.

Rhythm is certainly the core strength of I Can Feel You Creep Into My Private Life, on which jazz-schooled bass player and long-term collaborator Nate Brenner becomes Tune-Yards’ official other half. But it’s hardly as if Garbus has ever been a slouch in that department. With 2011’s Whokill, she shifted away from her debut’s lo-fi, DIY mix of ukulele, percussion, vocals and snatches of field recordings to something more insistent, with a strong undertow of idiosyncratic funk – a result of her exploration of non-Western beat patterns, especially African polyrhythms and a non-reliance on the down beat. Songs like “Gangsta” especially, chimed with the pop of peers Vampire Weekend, but there was nothing collegiate about Tune-Yards; their rhythmic interests ran to gently skronking wyrd folk (on “Wooly Wolly Gong”) and math-jazz (“Riotriot”), while following Afro-pop’s source. It was 2014’s Nikki Nack, though, that underscored not only the eccentricity of their art, but also its flexibility and futurist spirit.

Now, Tune-Yards’ fourth, which embraces the broad, even populist notion of “electronic dance music” while perversely pushing them further than they’ve pushed themselves before. It’s a big, bold, entertainingly disruptive blast of a record with a mirror-ball lure, refracting everything from Motown to early ’80s disco and funk, boom bap, ’90s piano house and contemporary R&B (to which Garbus’s powerful, multi-tasking voice is brilliantly suited), which loses none of their oddness or playfulness, but puts issues such as race and cultural identity, privilege, intersectional feminism and looming ecological disaster under the lyrical spotlight.

Explaining the prime motivation of I Can Feel You Creep Into My Private Life, Garbus told Uncut: “I was fascinated by my own snobbery about four-on-the-floor dance tunes. I didn’t feel comfortable actively disliking a whole genre of music, so I set out to learn about where ‘EDM’ came from: its history, roots. I’ve always loved making music people can dance to and I’ve also wanted to complicate pop music, rhythmically, melodically, lyrically, thematically. I wanted to see if we could make dance music with electronic elements that still felt in line with what Tune-Yards had done before.”

All those boxes are ticked, when you consider songs picked even at random. Soaring first single “Look At Your Hands” for instance, whose super-charged clatter and delirious, “la-la-la-la-la-la” beat punctuation suggests Michael Jackson’s “Wanna Be Startin’ Somethin’” reconfigured around bass music’s DNA – but with power/lessness and inherited agency on its mind. Or “Colonizer”, where Garbus’s light, sing-song tone (“I use my white woman’s voice to tell stories of travels with African men/I comb my white woman’s hair with a comb made especially, generally for me”) contrasts with chip-tune chattering, a distorted bass frequency and pitch-shifted choral ululations. In contrast are “Honesty” (a Technicolor, sax-strafed update of William Onyeabor’s psychedelic funk), “Coast To Coast” – driving, blues/soul pop with a keys nod to Talk Talk, of all people, and an apocalyptic theme (“see you in the middle, when the walls come tumbling down to the sea”) – and the album’s wild card, the soulful and dreamy “Who Are You”. Here, Garbus’s voice seems to be drifting across constellations in search of connection like a satellite signal on the blink, while a saxophone flutters around her. Tune-Yards sign off with the effects-heavy “Free”, whose Nina Simone-ish supplication soars above a shuddering beat pattern before being silenced by a backwards noise loop.

The final sound on the record is Garbus counting out a beat, with sticks, for (presumably) Brenner and laughing as she throws back to opening track “Heart Attack”. It’s a neat, full-circle closer – and also a reminder not only that the beat goes on, but also of Tune-Yards’ enduring commitment to its primacy. SHARON O’CONNELL

Q&A
Merrill Garbus
What determined your approach to this LP?
I was disturbed by aspects of our previous tour cycle. So much of Tune-Yards music is directly influenced by black music: folk and pop music from all over Africa, hip hop, funk, rock, soul, blues… and I felt a real disconnect between our mostly white audiences and any real kind of examination of ourselves, of our whiteness, of our relationship to this music… I wondered if I was being explicit enough about my discomfort with our complicity in this system. I felt the weight of the Elvis legacy, I suppose – being a white performer filtering black music through a white experience and selling a “white-washed” product to mostly white people. I wanted to disrupt that, or to see if I even could disrupt that.

Which elements of ’80s music do you love most?
I appreciate some of those early drum machine-based songs, where there’s not the kind of hi-fi beats we have now, where everything sounds crisp and perfect. It was a lot of information jammed into a sample, a drum loop, whatever… crunchy, rough around the edges, sometimes kind of thin, sometimes totally blown out. I also loved those late-‘80s dance anthems where just one word gets chanted. As much as I don’t like to live in the past, the ’80s pulls me back all the time. It gets a bad rap for cheese.
INTERVIEW: SHARON O’CONNELL