Their unsavoury reputation precedes them, but the photo of Throbbing Gristle on the sleeve of Greatest Hits (1981; 7/10) reminds us there was more to the first Industrial group – their capital letter – than first appeared. 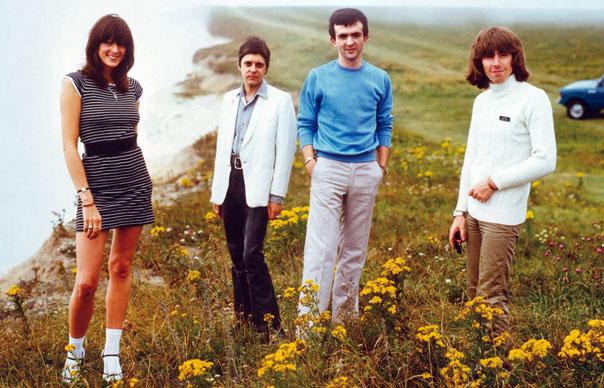 Their unsavoury reputation precedes them, but the photo of Throbbing Gristle on the sleeve of Greatest Hits (1981; 7/10) reminds us there was more to the first Industrial group – their capital letter – than first appeared.

Posing in a tiki lounge in Hawaiian shirts, Cosey Fanni Tutti coquettish in a cocktail dress, they look more like Hi-De-Hi campers than the group Tory MP Nicholas Fairbain called “wreckers of civilisation”. Nor was this irony, exactly. ‘Dedicated to Martin Denny’, reads the sleeve, and one might wonder what the bandleader and self-styled “king of exotica” made of it all, were his letter of response not printed in the glossy booklet inside. “I do have a sense of humour,” types Denny, before admitting to being “incredulous” that someone would choose to cut Throbbing Gristle’s music to wax. “Is it intended to be a shocker?” he asks. “I would appreciate a reply.”

To be fair to Denny, this sort of confusion to the work of Genesis P-Orridge and friends was far from uncommon. Appearing in 1976, Throbbing Gristle shared certain things with punk – an outsider stance, a taste for transgression – but their methods were alien by comparison. While the punks were busy scribbling zines and folding seven-inch sleeves, TG were way ahead; their DIY activity yielded modular synths, tape-loop machines, and the Gristleizer, a custom effects box built by the group’s electronics wizard Chris Carter. They recorded in the ruin of a Hackney school, provocatively christened the Death Factory, and released it on their own Industrial Records, styled like a corporation, right down to the pseudo-businesspeak communiques. Jon Savage described them in the terms of a “laboratory… a research institute”, while vocalist Genesis P-Orridge said, of the group’s ambitions: “We wanted to get away from all the connotations of rock’n’roll and blues… drag it out of slave music and into the 20th Century”.

The death of the band’s Peter “Sleazy” Christopherson in 2010 brought to a close the second incarnation of the band, precipitating this final issue of five albums. The music collected within veers from visionary electronic invention to meandering unmusical passages and ambiguous field recordings. That moments border on being boring would seem to be the point: TG specialised in a sort of exquisite tedium, of music decayed. 1977’s Second Annual Report (8/10) collects live recordings and one studio piece, “After Cease To Exist”, but really it’s more about an atmosphere than distinct songs, a dystopian churn of smoke and asbestos dust, P-Orridge reciting true-crime tales from the gloom. Queerly hypnotic, it takes a live rendition of “Maggot Death” from Brighton to break the spell, as the music is interrupted by hecklers, an irate DJ berating them as “a load of fucking wankers” before putting a record on.

If Throbbing Gristle were much misunderstood in their day, perhaps this was because in an era of preachers and polemicists, they stood at a slight remove from their material; they were documenters of their surroundings, paying special attention to social ills, the mechanical and the macabre. 1978’s excellent DOA: The Third And Final Report (8/10) reflects the world in strange and bold ways. “IBM” utilises chattering machine code found on a tape disposed of by the computer manufacturers. “Hamburger Lady”, inspired by the tale of a burns victim, pulsates like some grotesque organism. “Death Threats” is audio direct from the group’s answering machine, while the rudimentary electropop of “United” – inspired by Abba, quoting Alastair Crowley – showed the breadth of their reference.

1979’s 20 Jazz Funk Greats (8/10) marked a turn into lighter territory, the tongue-in-cheek cover picturing Throbbing Gristle posing like catalogue models at notorious suicide spot Beachy Head. Musically, it turned away from the precipice; not exactly jazz and funk, but sublimating TG’s noise elements within electronic rhythms and proto-exotica. Album highlight “Hot On The Heels Of Love” is convincingly Moroder-esque disco, Cosey breathing sweet nothings amid bubbling synthesisers and whip-crack snare. Elsewhere, P-Orridge mines a lyrical seam of control and domination. “I’ve got a little biscuit tin,” he wheedles of “Persuasion”, “to keep your panties in.”

Two more releases complete the campaign: 1980’s Heathen Earth (6/10), a stern live album recorded in front of an invited audience, and Greatest Hits. Marking the group’s 1981 split, it mixes TG’s modes with impunity, brittle synth disco giving way to misanthropic squall, and back again. A bewildering entry point, as Martin Denny could confirm, but there is pleasure in the fact that Throbbing Gristle remained perverse until the end.
Louis Pattison

Q&A Chris and Cosey
What has taken place in this reissue process?
Cosey: When Sleazy left us last year we were just about to start work on the reissues. Historically he’d always overseen TG’s artworks, graphics and photography. By the time we could actually face doing anything and Chris had completed the remastering, it dawned that responsibility for redoing the cover artworks was on our shoulders.
Chris: Gen offered to send us material but didn’t bother to follow it through. But we hold the bulk of the TG archive and had access to Sleazy’s negatives so it’s not like we had a shortage of material.

Is there an album that stands out as a favourite?
Chris: My strongest connection is with DOA because at the time of recording I’d fallen head over heels in love with Cosey. DOA showcased some of our strongest work and established the course we would head in.

And what of the final TG record?
Chris: Desertshore – The Final Report will be TG’s last studio album, and is a cover of the Nico album. The concept came about in Berlin in 2006, but when Genesis walked out on TG in 2010, Sleazy began reworking the album with the intention of using guest vocalists and an esoteric piece of equipment he’d bought. This year we’ve been recording those vocals and trying to make sense of the recordings he left us with.
INTERVIEW: LOUIS PATTISON