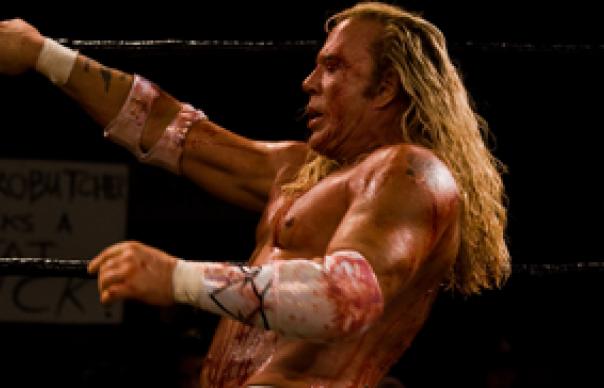 Randy The Ram is a professional wrestler way past his prime, who ekes out a living on the D-list circuit. When he is offered a chance to recapture his former glory, it looks like his life might take a turn for the better. But events conspire against him. And Randy has to make a decision that will have far-reaching consequences for everyone around him.

You could be forgiven for wondering exactly how much of The Wrestler is an extended therapy session for Mickey Rourke. After all, watching Rourke’s over-the-hill wrestler attempting one last shot at glory, it’s difficult to distinguish quite where Rourke’s own life story ends and that of his fictional counterpart, Randy The Ram, begins.

Speaking to UNCUT in 2003, for instance, Rourke claimed “I lost everything – my credibility, my marriage, my money, my soul. This time, I can’t afford to fuck up. Because if I do, it’s the end.” It’s the kind of speech Rourke virtually delivers word for word on several occasions in The Wrestler, and you might reasonably assume he’s channelling memories of his own career after falling from the Hollywood A list. Over the opening credits, director Aronofsky runs a montage of Randy in all his pomp, culminating in a bout at New York’s Madison Square Garden, in front of an audience of 25,000. The year is 1985, the same year Rourke starred in The Year Of The Dragon, with 9 ½ Weeks close behind. It seems no accident that both actor and character are firmly located at their peak at the same time.

When we meet Randy properly for the first time, 20 years later, he’s living in a New Jersey trailer park; the locks have been changed because he’s behind with the rent. He sleeps in his car, washing down pills with beer. He’s apparently only good for playing at scaring the local kids, who treat him like a battered fairytale ogre. He has a hearing aid and appalling blond locks that make him look like a cheap Axl Rose impersonator. Rourke tells similarly grim stories of his own life after his own decline – including, in the interview over the page, working security for gamblers, brothels and transvestite bars – so you could assume this is, perhaps, not too much of a stretch for his acting muscles. Certainly, Rourke looks (indeed, >i