The Unthanks – Here’s The Tender Coming

Northeastern folk family tweak name and lineup, but stay true to their course 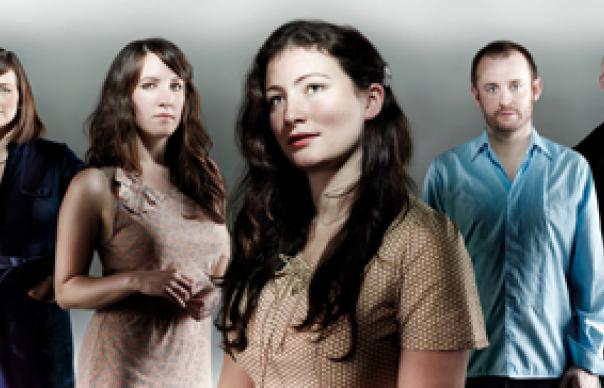 Playing both sides against the centre is one way to describe the approach that has brought Rachel Unthank and the Winterset success, the two sides in question being hardcore Northumbrian folk, and cutting-edge neo-classical arrangements.

Of more customary ways to update folk tradition – the electric guitars and muscular fiddle of, say, Seth Lakeman, or the electronica of Tunng – there has been no sign. Instead, the group have stayed resolutely focused on the sibling vocal harmonies of Rachel and sister Becky, delivered in the saltiest of Geordie accents and framed by backings that range from string quartets to minimalist piano codas reminiscent of Erik Satie.

First heard on 2005’s debut, ‘Cruel Sister’, the combination was brought into mournful majesty on 2007’s ‘The Bairns’, an album as bleak but bracing as a North Sea downpour, which won the group a Mercury Prize nomination and converts from way beyond the folk community (few of their peers can boast Radiohead and Robert Wyatt among their fanbase).

The expansion of the Winterset’s female quartet to a nine-piece lineup that includes bass and drums, along with their rebranding as The Unthanks, suggests a move towards the mainstream, but this third album follows seamlessly on from its predecessors. Not much has changed; piano duties pass from Stef Conner (herself a replacement for Belinda O’Hooley) to producer Adrian McNally (Rachel’s husband) and multi-instrumentalist Chris Price has also joined. The further four members, says McNally, are as much about giving the group extra oomph onstage as changing their sound.

The group have, however, lightened up a little. The intensity of ‘The Bairns’, with its songs about poverty, drunken wives and lost children, is still in place, but leavened by numbers like “Betsy Belle” and “Where’ve You Been Dick” that owe much to the jaunty traditions of music hall. The one original song here, “Lucky Gilchrist”, likewise celebrates a fallen friend in a style as sprightly as his character (“full of glee, a bit like Freddy Mercury”). The record is, as Rachel puts it, “a warmer shade of sad”.

There is, nonetheless, a wintry eloquence to much of Tender; “Sad February” grieves over drowned sailors, “The Testimony of Patience Kershaw”, a 1970 song by Frank Higgins, relates the gruelling role child labour in Victorian coalmines, and Ewan MacColl’s “Nobody Knew She Was There” honours a cleaning woman driven to suicide in “the writhing foul black water”.

Nor is the mood of desolation much altered by the eight-minute epic “Annachie Gordon”, a ballad learned from Nic Jones, in which a maiden is forced to marry a lord and forsake her true lover, a humble fisherman who arrives to find his love dead from a broken heart. Nor by “Flowers Of The Town”, their version of the much covered Scots lament, “Flowers Of The Forest”.

Yet it’s in the nature of the blues – and what is Britannia’s folk tradition but our islands’ version of the same? – that redemption is always lurking. That promise is held within both the tender vocal harmonies of the Unthank sisters, and the inventive settings to the songs. “Nobody Knows” chimes with bright autoharp, while Lal Waterson’s “At First She Starts”, whose stately strings cast a doomy mood, is actually about finding one’s personal voice.

The title track plays against the grain in the opposite manner, at first coming across as a cheery love song but in reality describing the arrival of Nelson’s navy – the tender in question is a boat – intent on press-ganging Geordies into the Napoleonic wars.

It’s an often exquisite mixture of light and dark, instinct and artistry, that honours both the power of old songs and the stoicism of the lives that shaped them. Rarely has the deep past sounded so stirring, or so modern.