The Rolling Stones – Live At The LA Forum / Hampton Coliseum 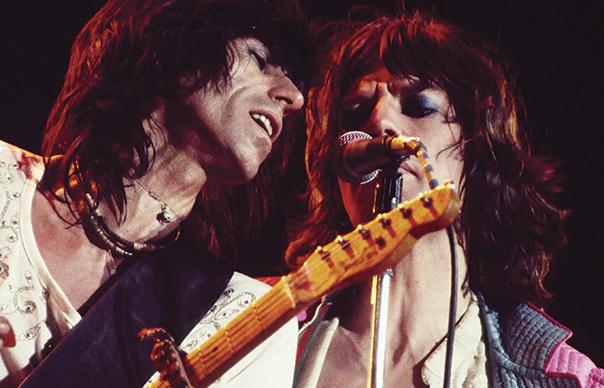 In the business of repackaging their past, the Stones have been laggards compared to peers like Bob Dylan or The Who, acts seemingly intent on releasing every last demo and alt. take. Only comparatively recently have ‘deluxe editions’ of the Stones’ classic albums started to flow.

Since the reputation of ‘The Worlds’ Greatest Rock and Roll Band’ rests as much on performance as on studio output, live shows are an obvious route to enforce (and monetise) their mythos, and the two here, from 1975 and 1981 respectively, have previously been available as sound-only downloads from the group’s website. The DVDs add the much-needed visual pizzazz; principally Mick’s cavorting of course, but also Keith’s shape-throwing, Ron’s way with an onstage cigarette, and the stoic impassivity of Charlie and Bill.

The LA show from date 1975 finds the group at the peak of their reign as degenerate rock royalty, the pre-show backstage scenes crackling with attitude and tension. The film is a gloomy document, its sound muddy, its camera work haphazard, though as a time capsule it’s priceless, not least as a reminder of the era’s sartorial excesses. Mick, cross-dressed in silks and sashes, is campily timeless, but Ron and Keith in scarlet and black leather loon pants are absurd, a pair of shaggy crows in eye liner, though they are trumped by Bill, encased in a brown and beige rhinestone ensemble. The case for punk rock – then in its birth throes in New York and London – is right there. Unless you reckon It’s Only Rock’n’Roll as a peak album, the Stones in 1976 were likewise at a somewhat grim pass of their career. Loaded on verboten powders, musically directionless, smarting from the exit of Mick Taylor, they spend much of their two and a half hours onstage in a leaden chug through numbers that on record had light and shade. “You Can’t Aways get What You Want” is formless, “Starfucker” routine, “Angie” and “Wild Horses” even drearier than on disc. A smacked-out Richards is not up to his job. “Keith’s gonna sing ‘Happy’,” drawls Jagger, except Keith can’t, and has quickly to be rescued by Mick. Much of the human riff’s guitar work is done by Wood. Only towards the end, after a turn from Billy Preston (‘Musical Director’ no less) do things improve with “Midnight Rambler” and ‘Street Fighting Man”. It’s Jagger’s show throughout, and while it’s hard not to be fascinated by the spectacle, it’s difficult to enjoy the music.

One might expect worse from the 1981 tour, by which time the Stones were in civil war, with the Glimmer Twins at loggerheads and Wood sunk into freebase hell. Instead, the show at Hampton, Virgina on Keith’s 38th birthday (18 December) finds the band on surprisingly good form. Keith, crisp in riverboat gambler tux and white shirt, is fully focused, patrolling the stage, scything out killer riffs, hunching shoulders, rolling eyes, stooping low to hit a power chord. He upstages Jagger, who while clearly exhausted has just enough juice left for what was the tour’s penultimate date. There are the trademark sprints up and down a vast walkway, but Mick postures less and dances better, at first in a lilac zoot suit with aircraft hanger shoulders (Hey, it’s the Eighties!), later in less well-advised American Football trim. Playing an unusual amount of guitar, perhaps to compensate for the struggling Ronnie, he also reminds us that he’s a very able blues singer.

The newly recruited Ernie Watts blows terrific, muscular sax and the faithful Ian Stewart pounds piano, notably on Eddie Cochran’s “Twenty Flight Rock”. There’s not a loon pant in sight, nor, on this occasion, the ‘cherrypicker’ lift Keith hated. Only Ron Wood is out of sorts, twitching, rictus, missing his cues and struggling to produce his solos – the simple bottleneck line on “Lean On Me” would have been routine for Faces-era Wood. The rest of the entourage do their best to ignore him.

It helps that the stage is well lit – the show was originally broadcast live on US television – and is overseen by Hollywood director Hal Ashby, whose camera stays where the action is. The repertoire is similarly well chosen, with a clutch of Sixties highlights – “Let’s Spend the Night Together”, “Time is on My Side” and a closing ”Satisfaction” – vying with recent material like “Shattered” and “Lean On Me”. Even a mid-set excursion into old-school soul – “Just My Imagination”, ‘Going To A Go Go” segues comfortably into the set.

That the Stones look and sound like a band comfortable with their past and confident with their present – Tattoo You was astride the global charts after all – would prove illusory. Years of in-fighting and fall-out lay just down the road, but here, at least, they emerge triumphant.
Neil Spencer