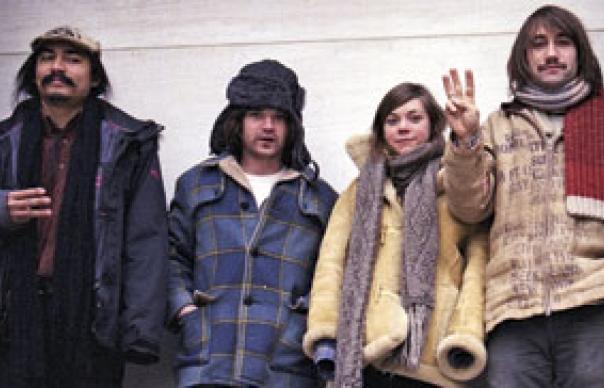 There’s an old Buddhist proverb that goes something like this: “Before you speak, ask yourself, ‘Will it improve upon the silence?’” It’s not a question you can imagine, say, Robbie Williams pondering at length.

But it sounds very much like the kind of question Rhode Island’s Low Anthem asked themselves before embarking on Smart Flesh, the follow-up to their breakthrough album, Oh My God, Charlie Darwin. A rootsy evocation of mythical America brimming with banjo, pump organ and a wonderful tumble of voices, Oh My God, Charlie Darwin was pitched somewhere between Fleet Foxes, Little Walter and Walt Whitman. Self-released in 2008, one year and a clutch of swooning reviews later it was remixed, re-ordered and reissued to enormous acclaim.

Smart Flesh, then, is the first Low Anthem album to be released into a spotlight rather than a vacuum. It would have been no surprise had the sound expanded to suit the increased dimensions of their appeal, becoming fuller and fatter. Instead, bravely and rather magnificently, they have retreated into something close to silence.

The first thing you notice about Smart Flesh is that the rattling garage-blues stampede which characterised songs like “Home I’ll Never Be” and “The Horizon Is A Beltway” is absent. The explanation lies in how the album was made. Much of Smart Flesh was recorded in a vast, abandoned pasta sauce factory in Central Falls, Rhode Island, and the band manipulate the unique sound of the space on almost every track: notes are struck and then slowly decay until what you’re hearing isn’t music but its memory. Opener “Ghost Woman Blues” is more of a suggestion than a song, a spectral incantation unfolding slowly over acoustic piano and lonely woodwind. “I’ll Take Out Your Ashes” uses just stringy banjo to lament a man “beyond all repair”, while “Love And Altar”, where Ben Knox Miller reprises the startlingly pure falsetto first heard on “Charlie Darwin”, sounds suspended in thin air, supported only by the barest strum. It’s all stunningly beautiful.

Now a four-piece, with Jocie Adams and Mat Davidson added to the original core of Knox Miller and Jeff Prystowsky, not only has the band’s sound palette expanded but their influences are more diverse. The pump organ and woodwind creaks of the almost static instrumental “Wire” stray into late Talk Talk territory. “Matter Of Time” takes the melody of Donovan’s “To Sing For You” and stretches it out slowly, creating an unsettling lullaby. “Burn” owes much to Leonard Cohen’s early albums, with the same grimly poetic observations declaimed in 3/4 time over a throbbing backing of Jew’s harp and organ.

Only two tracks puncture these reveries: the raw, rather workmanlike country-rock barrage of “Hey, All You Hippies!” and the stunning “Boeing 737”, a mighty artillery of sound reminiscent of Arcade Fire at their most uplifting. “Apothecary Love”, meanwhile, ticks along nicely, an easy country waltz – “first she shot me with whisky then she chased me with gin” – with echoes of Gram Parsons’ “The New Soft Shoe”, or perhaps a less tongue-in-cheek take on The Stones’ “Dear Doctor”. The lyrical preoccupations are oblique but death is never far away. “Golden Cattle” is positively hymnal, touching the divine with its talk of “the next life”, while “Boeing 737” seems to revisit 9/11 with lines about “prophets and heaven” and being “in the air when the towers came down”. The seven-minute title track is even more unsparing – “In the end you’ll be alone, for lonely death does creep” – but it’s the one song where an understated arrangement exerts an inertia; what could have been a colourful, carnivalesque finale barely catches light.

That disappointment aside, this hushed crawl of a record is anything but tentative. The sounds on Smart Flesh may be muted, but there is power and daring in its pursuit of stillness. File under: a quiet storm.
Graeme Thomson

Q+A Ben Knox Miller
Smart Flesh sounds like the ultimate expression of your more reflective side.
The sound of the room is so important to this record. We made it in this cavernous place, and we thought of the room as the main instrument. A lot of our sound is based in the way noise fades. We had designs to do a few more abrasive songs but they seemed to fall flat, the sound was too murky. When we find ourselves in another space everything is on the table again.

Was it a smooth process?
We thought the record was done when we came out of the session in the pasta sauce factory, but we ended up being unhappy with it. We moved the studio into another building, a garage-y sounding room which trapped the energy in a different way. We recorded another 10 songs there in two weeks, and all of a sudden there was another dynamic to the record.

After the success of OMGCD, were you aware of increased expectations?
I’ve tried not to think too much about it. We’re heady enough already! I’m much more concerned with the craft than how it is received in the world. That’s a separate thing.
INTERVIEW: GRAEME THOMSON