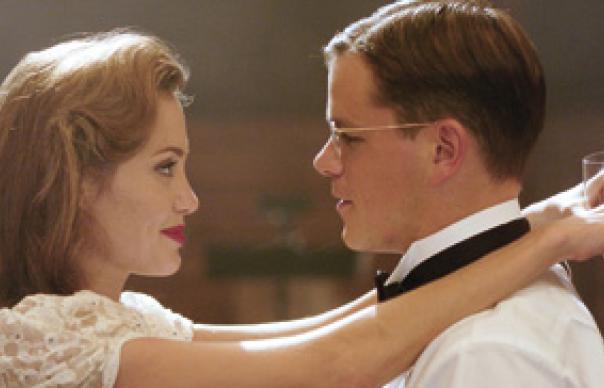 Through the life and career of taciturn idealist Edward Wilson (Damon), who becomes “heart and soul” of the CIA, we follow the organisation’s growth from its WW2 precursors through to its Cold War-era power and dominance. His steely dedication requires sacrifices which cost him first young love, then the trust of wife (Jolie) and son. He can count on nobody’s loyalty, and his psychological battle with his KGB counterpart can never be fully won.


THE Good Shepherd has the feel and span of a Great American Novel, crossing decades in pursuit of a mystery – the rise and reasoning of the Central Intelligence Agency. Mailer or De Lillo might broach such a subject, but in cinema few outside Oliver Stone have, since the late Seventies, possessed the cojones or hubris to chase after such a huge yet nebulous entity, whose very essence consists of secrets rarely yielded. Cinema is designed to show, not tell – how do you show the veiled, the hidden?
By keeping things relatively straightforward – this is an austere, serious film. Long, sure, but in the wilful absence of any sensationalism it drives along with smart pacing and an awareness that this story is curiously gripping. And by giving us a central character who’s flawed but intriguing. He represents the corruption of an ideal. Which is the perennial big American theme.

De Niro has directed a full feature only once before (1993’s A Bronx Tale). That he triumphs here, with intelligence and stamina (and a host of literary references, from Ovid to Le Carre), must be partly down to all he’s absorbed from the giants he’s worked with. But he’s aided by a strong script from Eric Roth (The Insider, Munich), exec-producing from Coppola, and cinematography by Stone regular Robert Richardson. This may not grandstand like JFK, but it’s more centred than the similarly ambitious Syriana or Bobby. It has real substance.

At its heart is Damon’s Wilson, who after a traumatic childhood becomes relentlessly focussed. As he deals with a close-to-home covert crisis during the Bay Of Pigs incident, we’re given his back-story in flashbacks. A Skulls And Bones over-achiever at homo-erotic Yale, he’s recruited by the Office Of Strategic Services during World War Two. In Blitz-era London and post-war Berlin, he excels, and is asked by General Sullivan (De Niro) to be one of the founders of the CIA. His acceptance defines the rest of his life: Wilson is a cold, clinical operator, a patriot beyond conscience, and thus the personal comes second to the political. He relinquishes his first (deaf) lover: then, after a shotgun marriage to insider “Clover” (Jolie, jumpy, too good-looking for the role), allows his own family to suffer. He’s a machine, fuelled by belief but starved of trust.

As Cold War paranoia reigns, he meets worthy Russian adversaries. By now, he’s hooked on tension, codes, deceit, life-or-death decisions. Only those in the same game, from Washington to The Congo, can relate to him – fiery sidekick John Turturro, suspect superior William Hurt, foppish English spy Billy Crudup (patchy accent), FBI man Alec Baldwin and, ironically, the Russians who vow to bring him down (one of these is played, excellently, by John Sessions). The film also boasts Michael Gambon, as a British agent whose fall from grace denotes the loss of Wilson’s initial innocence, plus cameos from Joe Pesci and Timothy Hutton.

The Good Shepherd subtly criticises US interventionism – plus ca change – without beating its chest. As in the best drama, extreme violence occurs off-screen, but the threat is ever-present. (There’s a rip-roaring exception to this when Turturro, torturing a Soviet informant, force-feeds him LSD – there follows an electric, trembling scene which throws you from your seat). All the foreboding, guilt and denial bears down on Wilson until, tricked into protecting his own son, he’s a broken man. Or would be, were he not still buoyed by belief that “his” America is always right. “The rest of you are just visiting,” he tells Pesci’s mobster, flatly.

Is Damon becoming the finest story-carrier working today? Having driven The Departed, he now bears nothing less than The Weight Of History here. Bespectacled but stoic, quiet “unless there’s something to say”, he underplays without a false step. He has acquired the genius to fade into invisibility when apt, to morph from grey-man to 3D-being when the heat’s up. Could it be that De Niro is also a great director of actors? He certainly proves here that (like Eastwood) he can direct a mature, questioning film without didacticism or pomp.