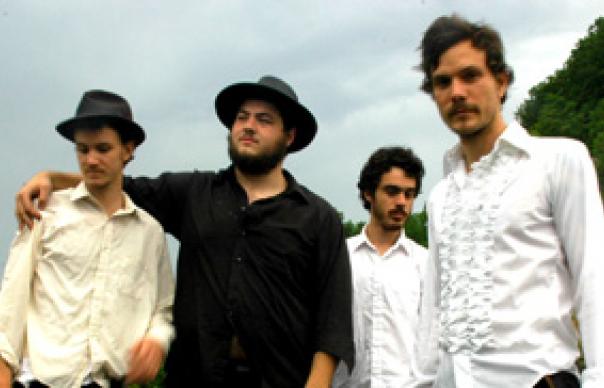 The Felice Brothers have a great backstory. It goes like this: three brothers from the Catskill wilderness pick up a crap-shooting runaway called Christmas, pack themselves into a rusted old schoolbus and head out for Brooklyn, busking ‘til nightfall, and living the hobo dream.
It may be a tad liberal with the truth (bassist Christmas was actually a family friend), but it’s all in keeping with a sound steeped in the myths of American folklore. The campfire ballads of last year’s debut Tonight At The Arizona drew from late-‘60s Bob Dylan and The Band, helped along by photos where the band appeared dressed like frontier gold prospectors. This time around, the Brothers have fully thrown themselves into an imagined den of vice.

A mad celebration of life on the margins, here the songs are peopled by the same pool of raffish drifters, outlaws and sinners as a Richmond Fontaine song. But while Willy Vlautin’s subjects often seem hopeless, The Felice Brothers make them flawed heroes of their own peculiar world. There’s the murderous master of disguise in “Helen Fry”, Tracey the junkie whore dreaming of Reno in “Don’t Wake The Scarecrow” and the jilted lover of “Whiskey In My Whiskey”, snuffing out Eleanor with three rounds in his .44, before making for the railroad tracks and doing the decent thing.

But the wonder of this music is how robustly it’s delivered. No doubt he’s tired of the comparison, but Ian Felice sings with all the nasal insouciance of ’68 Bob, aided by great splashes of bordello piano from sibling James, along with sudden gusts of brass and accordion. The marvellous “Frankie’s Gun!” sounds like a wonky New Orleans street parade, while the scratchy harmonies of “Love Me Tenderly” are direct descendants of “Million Dollar Bash”. And hats off for rhyming “fender” with “long-legged Brenda”. Rowdy, vivid, moving and playful, The Felice Brothers is just glorious.