The Decemberists – The Hazards Of Love

…or, if you will, a Chaucerian rock opera 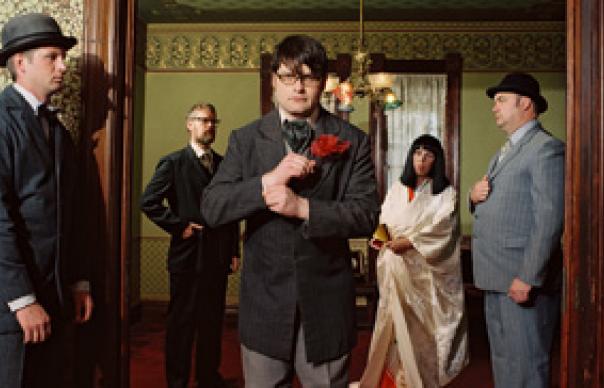 Since first forming The Decemberists in 2000, Oregon’s Colin Meloy has been embedding archaic verbiage into songs that draw on British electric-folk and prog rock. Along the way, his lyrics have evoked the rollicking seafaring yarns of Patrick O’Brian and the fabulist fiction of Steven Millhauser, with whom Meloy shares a piquant sense of irony. These aspects are readily apparent in the song titles themselves: say, “The Mariner’s Revenge Song” from 2005’s Picaresque or “The Shankhill Butchers” from The Crane Wife.

This penchant for tongue-in-cheek arcana is accompanied by a thematic ambition that manifests itself in extended pieces like “The Tain”, a five-part, nearly 19-minute piece based on the ancient Irish epic poem of the same title) that takes up an entire EP, and the three-part title song of The Crane Wife, which spans 15 minutes-plus. Both are laden with orchestral motifs and movements crisply executed with standard rock instrumentation. Given all of the above, it’s a good thing that Meloy possesses a wicked sense of humour, and that his band plays with such intensity.

The Hazards Of Love, then, stands as a culmination of all these tendencies. Set – yes – in an enchanted forest, it’s a 17-track suite (I hesitate to call it a rock opera, but the term wouldn’t be far off) of striking musical and verbal intricacy that unfolds over the course of nearly an hour. This thumbnail description makes the album sound stultifying, but this is far from the case, thanks to a steady stream of surprises and a depth of detail that reveals itself incrementally. But it takes just one listen for the key melodies, refrains and riffs to ingrain themselves, because they keep leaping out of the fabric. The title song gets four parallel treatments over 18 minutes, the deliriously melodic “The Wanting Comes In Waves” comes up twice and the twinkling guitar figure from Chris Funk (a cross between Richard Thompson and Wilco’s Nels Cline) that first appears in “A Bower Scene” and recurs in “The Abduction Of Margaret”.

As always, Meloy sings with the accent of an American actor imitating an Englishman in a 1930s film, and one might expect that this stylised approach might get tiresome over time. But that’s not the case here – he shares the lead vocal duties with Lavender Diamond’s Becky Sharp, presumably chosen to play the part of the imperiled heroine Margaret because she’s the closest approximation of Sandy Denny Meloy could find, and My Brightest Diamond’s Shara Worden, who attacks her part as the forest queen with confrontational eroticism. Additionally, the album is loaded with stacked harmonies, with My Morning Jacket’s Jim James and The Spinanes’ Rebecca Gates joining in.

In the US The Decemberists are now on their second major label album (both The Crane Wife and this are on Capitol) and their following has grown to the extent that they filled the 18,000-seat Hollywood Bowl in a 2007 concert with the LA Philharmonic. In short, they know exactly what they’re doing, and that includes making sure their concept albums contain at least one hooky stand-alone track for airplay and encores. The last album contained “The Perfect Crime #2”, a pumping rocker that picked up where “Life During Wartime” left off, and The Hazards Of Love sports “The Rake’s Song”, powered by a springy single-note acoustic riff from Meloy and savage drumming from John Moen, who plays with the relentless precision of Radiohead’s Phil Selway. The lyric concerns another cold-blooded killer, who systematically offs his children, celebrates when his wife dies in childbirth and, once he’s finally free, expresses relief rather than remorse. The tale would be horrific and tasteless if set in the modern world and described in our vernacular, but in Meloy’s deft hands it comes off like a newly discovered part of The Canterbury Tales. If there’s a movie version, the Coen Brothers need to get the first call.

What do traditional idioms like folk and classic literature tell us about modern issues?

CM: As far as I can tell, the Brit folk revivalists were by and large drawn to songs that involved drinking, murder and rape. Anne Briggs’ first record, the namesake of ours, “The Hazards Of Love” included four songs that warned of just that – the apparent hazards of being an amorous person in the olde days. I believe there were relatively more dangers that could befall your typical Spenserian teenager. A lack of prophylactic being a major contributor….

“The Rake’s Song” is a homicidal single, but somehow acceptable when couched in archaic language….

CM: Yeah. I think that’s one of the things that the folk revivalists were into. A lot of women singers of that era were arranging songs in which misogyny and rape figured largely. I think they discovered it was safer to explore those sorts of themes in older songs.