Sly And The Family Stone – Reissues

We want to take you higher! Sly’s definitive works, remastered and with bonus tracks 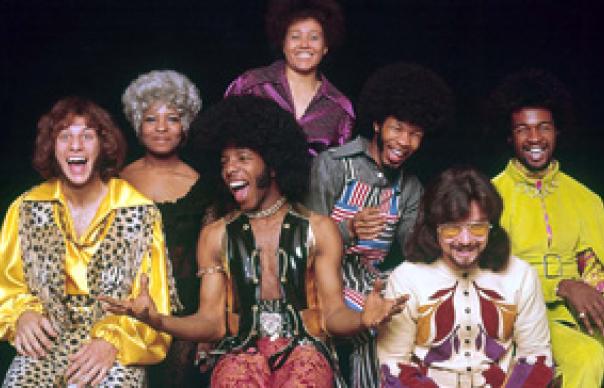 
Let’s cut straight to the chase: despite their baffling lack of commercial success in the UK (they were far more successful at home, notching up three number one singles), Sly & the Family Stone were the quintessential artists of the 1960s. Say what you want about The Beatles, The Rolling Stones, The Who, Marvin Gaye, The Temptations, Bob Dylan, The Grateful Dead or Sir Cliff, Sylvester Stewart and his merry band of brothers, sisters, cousins and hip honkies were the only ones who actually put the rhetoric of ‘60s idealism into practice. A gorgeous mosaic of polysexual, multiracial voices at the service of some of the most galvanising, subtlest and least preachy “message” songs ever written.

Sly & the Family Stone were undeniably a great singles band – the 1970 version of their Greatest Hits remains the greatest single-volume best-of collection that any artist has been blessed with. But as these excellent and timely reissues prove, they also embraced the album form more than any other soul (if you want to go against everything the group stood for and label them that way) artist until Marvin Gaye and Stevie Wonder were liberated from Berry Gordy’s iron grip.

Sly was inspired to combine psychedelia and soul and apply the libertarian axioms of Haight-Ashbury’s privileged white bohemia to the struggle for civil rights after dealing with one too many hippies as in-house producer for San Francisco label Autumn Records. He formed the Family Stone in 1966 and the group’s first album, 1967’s A Whole New Thing, was as advertised: an amazing and unprecedented amalgam of Beau Brummels-style folk-rock, mind-expanding production touches and driving Stax soul.

It doesn’t have the zeitgeist-nailing qualities that characterises the group’s best records. But A Whole New Thing remains startling for the way in which Sly wrestles with traditional soul conventions – not just with the psychedelic touches on “Trip to Your Heart”, but in the Charles Mingus-style horn charts that pepper the album (particularly on bonus track “Only One Way Out of This Mess”) and in the proto-funk of tracks like “I Cannot Make It” that scared Motown producer Norman Whitfield shitless. Of course, A Whole New Thing also includes the wonderful “Underdog”, one of the great songs written about race and the first exposition of Sly’s great theme of perseverance in the face of criticism and betrayal.

The Family Stone’s sound truly coalesced with the miraculous title track of 1968’s Dance To The Music. Featuring Larry Graham’s mastodon-on-a-rampage bassline, relentless four-square stadium rock drumming from Greg Errico, and a glorious cacophony of gospel shouts, blaring horns and guitar licks, “Dance To The Music” was pure electricity transposed to vinyl. More importantly, it introduced the Family Stone as a true collective of (almost) equal parts rather than the more traditional hierarchical vocal group format. The rest of the album finds the group playing around with the contours of their new-found sound (of special note is the 12-minute jam session edit “Dance To The Medley”, which anticipates Miles Davis’ experiments with Teo Macero) without the songs it deserved.

Those songs would begin to arrive on 1968’s Life. “Chicken” in many ways sums up Stone’s art: he takes a seemingly innocuous pop form (in this case, the silly, clucking dance craze records about “Funky Chickens” and “Chicken Struts”) and turns it into a moving statement about the power of music and self-realisation. The title track is an uplifting pop trinket with a dark undertow that has Sly unflinchingly examining himself, a habit that would be writ large on There’s a Riot Goin’ On.

1969’s Stand! was the group’s true breakthrough. The seamless blend of rock, funk and soul, and the soaring mix of black and white voices, made crossover seem like Utopia. At a time when the civil rights coalition was breaking apart, when flower power was mutating into armed struggle, the Family Stone clung desperately to the belief that “You Can Make it If You Try” and had the gall to deliver the decade’s most powerful message of unity as a singsong nursery rhyme. Of course, maybe “Everyday People” was believable as a nursery rhyme because, on songs like “Don’t Call Me Nigger, Whitey” and “Somebody’s Watching You”, Sly watches the ‘60s dream disintegrate before his eyes.

As much as he wanted to believe, Sly saw that the promises of the ‘60s were nothing but lies. He raged against the dying of the light not by eviscerating his amps à la Black Sabbath or Funkadelic, but by sitting alone in his room with nothing but his demons and a drum machine for company. The result is, quite simply, the greatest album ever made. There’s A Riot Goin’ On begins with the lyric, “Feels so good inside myself, don’t wanna move”, and then Sly spends the rest of the album telling you why, set to skeletal grooves too beat to fight their way through the narcotic haze. It’s pessimistic, bitter and hard to take, to be sure, but the album is still suffused with Sly’s genius and energy, just that it’s now nervous and sardonic. The remastered version sounds great, except it seems to eliminate several layers of fog, which may or may not be a good thing depending on your commitment to the artistic vision.

Fresh was nearly as derisive as Riot (the caustic cover of “Que Sera, Sera”, the “cha-cha-cha” that ends “If It Were Left Up To Me”) and rides a similarly attenuated staccato groove. But it is more fleshed out, the female chorus indicates that Sly had at least gotten outside of himself, and “Skin I’m In” has a hint of the resiliency of old. While Fresh is a bit of a retreat, it is still an uncompromising vision of a world and a man gone mad. By the time of 1974’s Small Talk, though, Sly just gave up on the outside world and started singing saccharine songs about his new wife and kid. The title of “Can’t Strain My Brain” seemed to sum up the album. The great, weird “Loose Booty”, though, is almost worth the price of admission.