Ray Davies' sole work as a director: a witty attack on 80s Britain 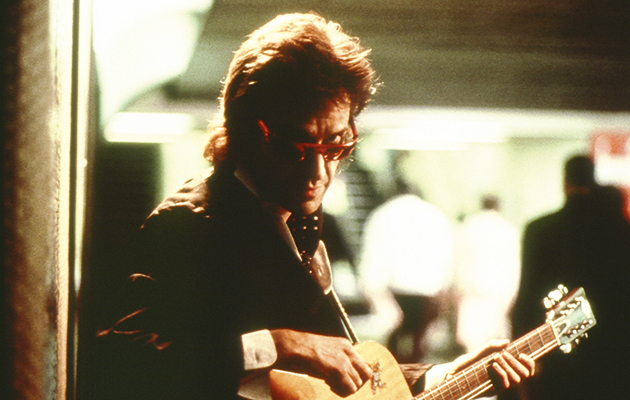 Ray Davies has turned his hand to most art forms during his career, but his sole foray into filmmaking, Return To Waterloo, has barely seen since it was broadcast on Channel 4 one Sunday evening in November 1984. Conceived three years earlier though, it is clever and acerbic piece – largely dialogue free, its narrative comes delivered in song – with a healthy contempt for the mid-1980s social and political landscape. A soundtrack album even followed in 1985. Although billed as a Ray Davies solo album, it featuring every member of The Kinks except Dave and including three songs from the band’s 1984’s Word Of Mouth album. Both artefacts have since been largely forgotten, but this DVD release reveals it as a significantly overlooked part of Davies’ canon; perhaps even his most fully realised work of the decade.

It stars Ken Colley as The Traveller, a commuter who contemplates past, present and future on the 8.52 from Guildford to Waterloo. Poker-faced, sad and sinister, The Traveller bears an unnerving resemblance to the police’s identikit profile of the “Surrey rapist”, which glares out from the cover of a newspaper at Guildford station. Does this explain the Traveller’s fascination with every young woman he sees on the train? Is he genuinely dangerous or simply another middle-aged fantasist? Or is he pining for his missing daughter?

The action is confined almost entirely to the train, although there are flashbacks to Colley’s youth, his house in Surrey, Waterloo station and other locations on the line to London. As the train passes through the suburbs, we meet some of the other passengers, who collectively represent the different ideologies and generations of British society. There are self-satisfied fellow businessmen, a trio of contemptuous young punks led by Tim Roth and Sallie-Anne Field, two old gossips (one being Ethel from Eastenders) and a pair of horrified veteran soldiers, distraught at perceived national decline. Davies even keeps a small part for himself, as a busker at Waterloo underground.

These ciphers really spring to life when they give voice to Davies’s ideas in singalongs that are both dark and comic. Davies displays a sure touch with these inherently ridiculous scenes by playing them so straight you have to take them seriously. In one, a young businessman is serenaded by two sharp-suited old hands who sit either side and promise him a ride “on the ladder of success” to an electro-disco soundtrack. Later, agony aunt Claire Rayner pops up to narrate the lyrics of “Lonely Hearts”, a plaintive yet cynical ballad. As the train nears Waterloo, the battle between the generations is represented by an actual fight on the train against the nihilistic backdrop of “Not Far Away”, delivered in part-snarl, part-drawl by Tim Roth, like Brett Anderson doing A Clockwork Orange. The songs are uniformly fine – particularly the Dylan-esque, nation-skewering finale “Expectations” – but not so good or so bad that they detract from the film’s narrative.

The influence of Dennis Potter is palpable – but you can also spot touches of Julien Temple and Alan Clarke, particularly in the concept of the yuppie rapist, a character who allows Davies to pick over his favourite ground – the hypocrisy, lies and corruption beneath the pressed suits of the English establishment. It’s a theme that never seems to date and which worked as well in the Thatcherite 80s as it does today in the aftermath of Brexit. In The Traveller’s home life, there are also obvious allusions to Davies’ personal circumstances; at the time, he was in the process of separating from Chrissie Hynde, with whom he had a daughter.

Cinematographer Roger Deakins – who later worked with the Coen Brothers and Sam Mendes – works here with a greyed-out palate that evokes the drabness of the British suburban experience. Davies, meanwhile, aquits himself well: although only 60 minutes, Return To Waterloo never feels slight. It’s exceptionally well executed for a first-time writer-director, and brilliantly visualises – even deepens – the over-arching conceptual content of Davies’s career-long work as a songwriter, story-teller and social commentator.
EXTRAS: None.