Queens Of The Stone Age – Lullabies To Paralyze 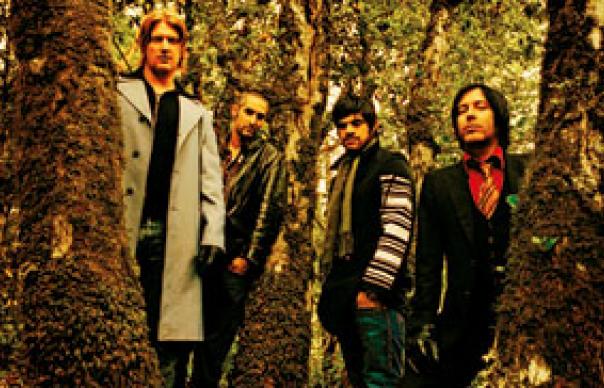 When word came out of the California desert last year that maniacal singing bassist Nick Oliveri and third vocalist Mark Lanegan had left Queens Of The Stone Age, few doubted that founding member Josh Homme couldn’t persevere capably without them. The man’s muse is manic — since 2002’s Song for the Deaf, he’s released an excellent PJ Harvey-graced instalment of his Desert Sessions series and played drums in his silly-boogie side-project, Eagles of Death Metal. Still, the pressure must have been tremendous. QOTSA’s second album, 2000’s Rated R, established ex-Kyuss members Homme and Oliveri as America’s most vibrant heavy rock band, and Songs emphatically consolidated that reputation. Here was a band that could woo with melodious, dark pop just as easily as it could wallop with bone-crushing, metal-fisted rock’n’roll.

Lullabies to Paralyze suggests that Homme, faced with this legacy, couldn’t decide whether to lean towards immediate, straight-for-the-jugular pop, or thunderous, rambling psychedelia. So he did both. Effectively embracing the entire history of the band’s sound, the album sprawls over an hour, and has so many peaks and valleys it’s practically topographical.

After lovely madrigal-like opener “Lullaby”, the following seven songs are tight, perfectly-formed examples of QOTSA’s signature driving repetition, multi-tracked falsetto vocals, and edgy, punky hooks. Homme’s energy proves uncontainable, though, and around the album’s halfway mark he cuts loose. “Skin On Skin” slinks into an unmade bed with wah-wah pedals and longing groans, while the downright weird “Someone’s In The Wolf” is a seven-minute epic riddled with seasick riffs and distorted vocals.

Lyrically, Lullabies seems preoccupied with the problem of errant women, which might have something to do with Homme’s girlfriend, notorious Distillers’ frontwoman Brody Dalle (who appears with Shirley Manson on backing vocals on the coolly swinging “You Got a Killer Scene”). “Everybody Knows That You’re Insane” and “Tangled Up In Plaid” (“Like to keep you all to myself/ I know you got to be free/ to kill yourself”), in particular, are love songs struggling to hold the squirming object of their affection.

Without Oliveri’s lunacy and Lanegan’s lugubrious gravity, Homme obviously has a few less tricks in his bag, but that’s only a minor disappointment. Queens Of The Stone Age have always been able to reshape even the most hackneyed rock’n’roll motifs into something fresh, strange, and exciting. In that sense, at least, nothing’s changed.