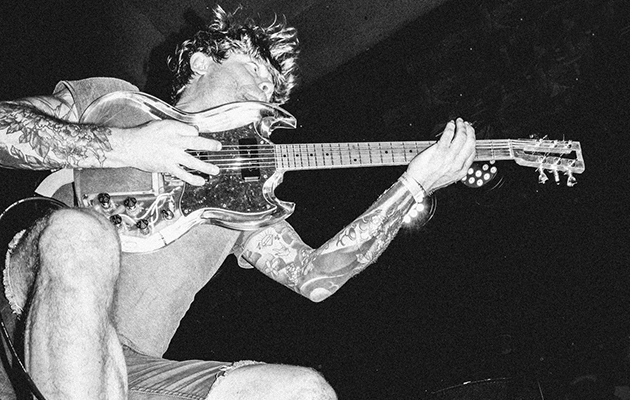 The news that John Dwyer has generously delivered a double album as the 22nd full-length studio recording by some configuration of his band Thee (or The or the or nothing at all) Oh Sees may be the least surprising thing about it. Indeed, Face Stabber’s 81-minute girth seems almost modest given the man’s productivity and the sense that he’s long been heading towards something big – so big, in fact, that the Germans have a fancy word for it.

Richard Wagner’s concept of the gesamtkunstwerk was that of a work that united all of the arts – music, drama, dance, spectacle – in one awe-inspiring creative totality. Surely, at the rate he’s going, Dwyer will soon produce his own equivalent to The Ring Of The Nibelung, consisting of hours upon hours of woolly freakouts, psychedelic sludge, free-jazz meltdowns, garage-punk assaults, unrepentant prog bombast, beatific folk and sun-dazed pop.  Visual accompaniment to this  Wagnerian opus would surely consist  of the most lurid excerpts of the films  of Alejandro Jodorowsky, Jess Franco  and the three-headed monster King Ghidorah, plus every shot in Mad Max: Fury Road featuring the guy with the flamethrower guitar.

In the meantime, there’s plenty here that needs digesting. And that’s just fine for all those who’ve regarded Dwyer as the tip of a modern psych-rock spear ever since his Oh Sees first reached Mach speed around the time of Warm Slime in 2010. Although they’ve since gained worthy peers in Ty Segall’s bands and King Gizzard And The Lizard Wizard – acts Dwyer helped launch when he released their early albums on his label, Castle Face – the Oh Sees remains the most artistically ambitious and flexible of the lot. Face Stabber sets a new standard when it comes to demonstrating Dwyer’s eagerness to extend, distend, distort and generally overhaul whatever constitutes the Oh Sees template. While he maintains a formidable standard regarding the mayhem and velocity of the Oh Sees live shows (no small thing given the major venues they’re now able to fill), there’s no predicting what will happen on the albums except that it’ll be loud.

Expanding the already wide scope  of last year’s Smote Reverser and 2017’s Orc, Face Stabber alternates between skronky bursts of primal aggression, medium-sized rockers in various stages of collapse, one more named “Captain Loosely” that seems to have totally liquefied, and two longer pieces. The occupants of this last category demonstrate the foremost imperatives in Dwyer’s modus operandi: hurtling between ideas and modes at breakneck speeds and drilling down deep into a single one until achieving some brutal yet effective form of transcendence. The album’s 13-minute centrepiece, “Scutum & Scorpious”, is more of a speed demon type. It opens with a burbling stream of Tomita-worthy synths before Dwyer fully indulges his love for the sort of Euro-prog heaviosity rarely attempted since Magma and Kedama first stomped the Earth.

Yet like “The Experimenter” and “Fu Xi” elsewhere on the album, the track also betrays an equally ardent affection for the squelchy sideways funk of jazz-fusion giants like Herbie Hancock’s Headhunters and Mahavishnu Orchestra. Dwyer may already have made his jazz predilections clear in his duelling-saxes side-project Sword + Sandals, but Face Stabber constitutes these elements’ deepest incursion into Oh Sees proper with thrilling results.

They’re certainly front and centre in the swaggering opening stretch of the 21-minute “Henchlock”. While Dwyer’s guitar shredding may ultimately win the battle for supremacy with the Hancock-style keyboard figures, the squalling  saxes of Dwyer and Brad Caulkins,  and Tim Hellman’s burly bass lines, the piece as a whole is as sophisticated as anything the Oh Sees have recorded, which is not to suggest it’s any less berserk. And weird, too, especially once Dwyer trots out his best Viv Stanshall around the 15-minute mark and declares, “Where is that cup of tea?/We all want cups of tea while we sit around…”

His cryptic call for a cuppa is all the more jarring given the general scarcity of Dwyer’s vocals on Face Stabber. That apparent reticence may have less to do with the shift towards heavy-duty jazz jams or the Can-meets-the-Trashmen freewheeling of “The Daily Heavy” than with his drive to keep the album’s full-throttle garage-punk stompers – “Gholü”, “Heart Worm” and the Locust-like “Together Tomorrow” – so ruthlessly compact. Then again, flux is the sole constant in Dwyer’s world, and only Face Stabber’s “Poisoned Stones” and “Psy-Ops Dispatch” bears any particularly close resemblance to the burly stoner-rock and classic-minded psych that were the Oh Sees’ forte a mere three years ago.

Whatever comes next for Dwyer and his Oh Sees will very likely be even wilder than Face Stabber. Of course, the wisest thing to do is savour all the strangeness, the power and the glory that fill the present.