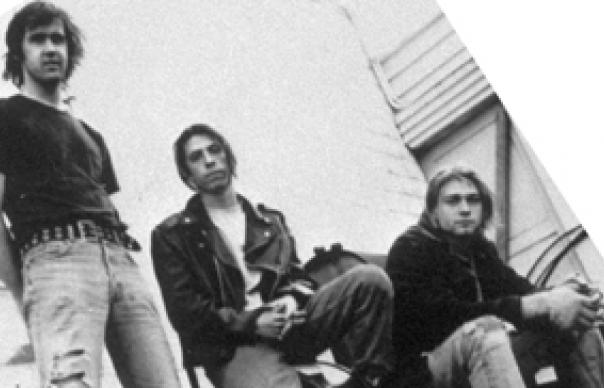 This couldn’t be a more appropriate time to reissue Nirvana’s debut LP. This is so not because it’s been 20 years since Bleach’s release or because this year marks the 15th anniversary of Kurt Cobain’s suicide, but because Cobain’s ghost has recently made a rather jarring appearance in seemingly the only mass cultural form left: as an avatar in Guitar Hero 5.

In a deliciously cheeky blow to the sanctimony surrounding alt.rock’s holy martyr, the virtual Cobain not only sings “Smells Like Teen Spirit” and “Lithium” but once unlocked can also be used to play such towering monuments to rock’n’roll liberation and anti-corporatism as “You Give Love A Bad Name” and “Play That Funky Music”. While that high-pitched wail you hear late at night may very well be the sound of Cobain screaming in his grave, this tongue-in-cheek heresy is exactly what’s needed to knock the preposterous halo off of Saint Kurt’s head.

Bleach is where the beatification of Cobain started. The story goes like this: our divinely pure hero drives up to Seattle from his hick lumber town 100 miles away with $606.15 to record an album. He is so far above such crass, commercial and inauthentic notions as professionalism and preparation, that he hurriedly scrawls the lyrics on the way to the studio. Nonetheless, he manages to produce such a masterpiece of alienation and slacker self-loathing that Nirvana immediately ascends to the punk rock throne. According to legend, the tape the group listens to on the way to the studio has The Smithereens on one side and Celtic Frost on the other, the very blend of Beatles-aping melody and nihilistic metallic crunch that encapsulated Nirvana’s stylistic breakthrough.

While it has always been an article of faith for the 50,000 or so people who actually heard Bleach before Nevermind made people seek it out in retrospect, it’s become increasingly fashionable (even among those who weren’t “there”) over the last few years to say that Bleach is the best Nirvana album – a patently absurd claim, but not one without its twisted merits.

Although Bleach was produced by Jack Endino in true shoestring style – thus sounding like it was recorded through a condenser mic dangled in a Venti cup of Seattle sludge (and still does in this deluxe version remastered by Endino himself) – there are plenty of hooks and the band’s sensitivity to dynamics prevent the album from submerging in moroseness like so many other grunge records. This muddy mole rumble further retains the thuggery that gives Bleach a sense of menace wholly lacking from Butch Vig’s sharp edges on Nevermind and too often rubbed raw by Steve Albini’s abrasion on In Utero.

But the best thing about Bleach just might be the lyrics, especially if you don’t buy all the “poet of a generation” malarkey. Much has been made of Cobain’s claim that the lyrics were written the night before the session and on the way to the studio. While the lyrics do feel tossed off and haphazard if not occasionally downright lousy (the comparison of Hell to high school with no recess on “School” – yeesh), the frankly New Age sincerity/intensity that characterised (and blighted) his lyrics from Nevermind on is thankfully absent. Instead, catchphrases (“In your eyes I’m not worth it”, “Here’s another word that rhymes with shame”) emerge from the murk to grab you by the throat even if they don’t “mean” anything.

For all the talk of Nirvana being paradigm shifters, Bleach is not the sound of the bloated corpse of rock’n’roll being dragged around by the barbarians who stormed the gates. The album’s best song, “About A Girl”, could be a Hollies or Knickerbockers b-side. Cobain’s guitar owes an evident debt to Black Sabbath and The Stooges, not to mention Meat Puppets II and Black Flag’s My War.

The drumming is leaden and lumpen and is often as lifeless as the Def Leppard syn drums they were seeking to kick over (Dave Grohl wouldn’t join the band until late 1990). They even cover Dutch psychedelic folk two-hit wonders Shocking Blue. Ultimately, Bleach is an excellent circa 1989 punk rock record and nothing more. The commitment to muck over punch keeps it firmly rooted in its time and place. Pre-Nevermind Nirvana was, however, truly transcendent on stage, and the second disc of Bleach Deluxe contains the complete recording of the group’s performance at Portland, Oregon’s Pine Street Theatre on February 9, 1990.

In addition to the bulk of the songs from Bleach, there are versions of “Been A Son”, “Spank Thru” and “Dive”. Live, the heart attack guitar riffs on songs like “School” were set free, Krist Novoselic’s bass was as punishing as it needed to be, and you didn’t really notice how pedestrian drummer Chad Channing was. Plus, they regularly destroyed their equipment, which was, unless you were around to see Pete Townshend smash his guitar, incredibly exciting to see in the flesh.

One small quibble, though: while it’s great to have documentation of the band’s early live sound (and in many ways the versions of the songs from Bleach are superior thanks to the sprightly energy), you don’t really get a sense of the sheer ferocity and electricity Nirvana generated in a tiny, cramped college bar.

Also included is a neat cover of The Vaselines’ “Molly’s Lips”. Admittedly, it has more cred than the Bon Jovi or Wild Cherry tracks that his avatar will be playing on Guitar Hero 5. But it does suggest that Cobain was still committed to a vision of music with room for play and humour in it. And was not, in fact, the solemn sufferer for indie purity he’s become since his death.