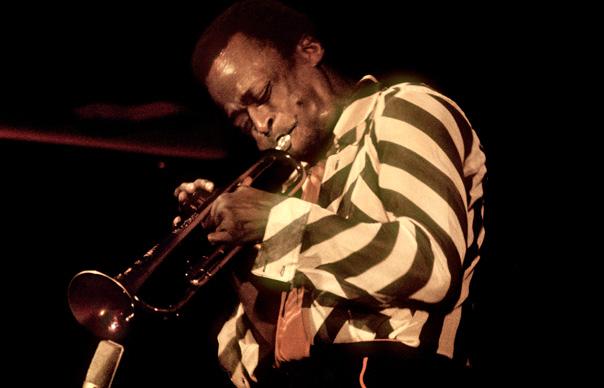 Miles in 1970: expanded, and expanding all the time…

The summer of 1970 was enlivened by the strong rumour that promised to be the supergroup to end all supergroups was about to make its debut: Eric Clapton and John McLaughlin on guitars, Jack Bruce on bass, Larry Young on organ, Tony Williams on drums and Miles Davis on trumpet. The potential fusion of Cream’s blues-rock with the jazz-rock explored by Davis’s groups over the previous couple of years promised to realise an ambition, shared by many, of linking the raw energy and audience appeal of one idiom to the intellectual richness and sophistication of the other.

According to stories in Rolling Stone and the Melody Maker, the unveiling was due to take place at the Randall’s Island Festival in New York. But, like Davis’s long-mooted collaboration with Jimi Hendrix, it was destined never to happen, aborted not so much by the musicians’ own desires as by the conflicting interests of those who took care of their business. Clapton carried on with Derek and the Dominoes, Bruce joined McLaughlin and Young in Lifetime, under Williams’s leadership, and Miles accepted an offer from Bill Graham to return to New York for four nights at the Fillmore East, supporting Steve Miller (“a sorry-ass cat”, in Davis’s later estimation).

He had played there earlier in the year, opening for Laura Nyro. At that point Wayne Shorter, his saxophonist for six memorable years, had been on the brink of quitting, and the band – increasingly under the influence of the pianist Chick Corea, the bassist Dave Holland and the drummer Jack DeJohnette — was edging closer and closer to free improvisation, making music that was magnificently risky but didn’t suit Miles’s intention to expand his audience rather than contract it.

When they played original Fillmore in San Francisco a few weeks later, with the Brazilian percussionist Airto Moreira added to the group and the teenaged saxophonist Steve Grossman replacing Shorter, their leader was pleased to encounter a warm reception not from the usual set of jazz fans encountered in clubs or at festivals but from five thousand young white hippies who had turned up to hear the bill-topping Grateful Dead. Some of them would never have heard of him, but others had the newly released Bitches Brew at home, stacked next to Aoxomoxoa and Volunteers. At a time when he was desperate to cast off the old image of a man who played “My Funny Valentine” while wearing an Italian suit, a new audience beckoned, and a successful appearance at the Fillmore East would confirm his transformation.

In the meantime Keith Jarrett – a former bandmate of DeJohnette in the Charles Lloyd Quartet, the first jazz combo to play at the original Fillmore three years earlier – had been added to the line-up. Jarrett would be playing organ while Corea concentrated on electric piano, both men utilising echo devices and ring modulators to distort the timbre of their instruments, creating textures might have been produced by an adventurous guitarist, which was perhaps what Miles – who loved Hendrix and had failed to persuade McLaughlin to join the band – was after.

Teo Macero, Davis’s producer, recorded all four nights before boiling down the results for release later that year on a double-album called Miles Davis at Fillmore. Each of its four sides was devoted to a 25-minute precis of one night’s music, labelled “Wednesday”, “Thursday”, “Friday” and “Saturday”, with no identification of the individual tunes that Macero had cut and pasted together to create a false unity. Now the four performances can be heard in full, restored to their unedited state, allowing us to share the enjoyment of audiences who experienced the way the music evolved over the course of each evening’s hour-long set.

This was a band that never felt the need to begin or end its performances with conventional gestures. Davis’s young sidemen might be wearing hippie headbands, but they had taken their leader’s habits of behaviour on stage – affecting detachment by never acknowledging the audience and disappearing into the wings while other musicians took their solos — as a template for a new, beyond-cool mode of self-presentation. But their full engagement in the creative task was never in doubt, and more than 40 years later the result compels close listening. Although they hack a straighter path through the jungle of sound created for Bitches Brew, there is no shortage of variety, from an oozing swamp of exotic electronic and percussion effects to a driving 4/4 funk rhythm anchored by jolting bass-guitar riffs, foreshadowing the evolution that would occur when Michael Henderson, with his grounding in the music of James Brown and Stevie Wonder, took over from Holland.

After leading a quintet that went unchanged from 1964 to 1969, now Davis was supervising a band seemingly in constant transition. Grossman, who had joined up just after his 19th birthday, would be gone by the time the band played to 600,000 young white hippies at the Isle of Wight in August, but his solos here show character and inventiveness as he drives the music into late-Coltrane territory.

As an ensemble, the musicians could swerve and drift with a deceptively offhand fluency through their repertoire — a nightly permutation from “Sanctuary”, “Directions”, “Miles Runs the Vooodoo Down”, “Bitches Brew”, “Spanish Key”, “It’s About That Time”, “Footprints”, and an unexpected nod to former glories in the ballad “I Fall in Love Too Easily” – in order to create a series of mood-platforms on which their employer could display every facet of his genius, from squally high-note explorations to pensive balladry. For whatever was going on around him, whatever costume he chose to wear in the search for a bigger audience, he was still and always Miles Davis.
Richard Williams