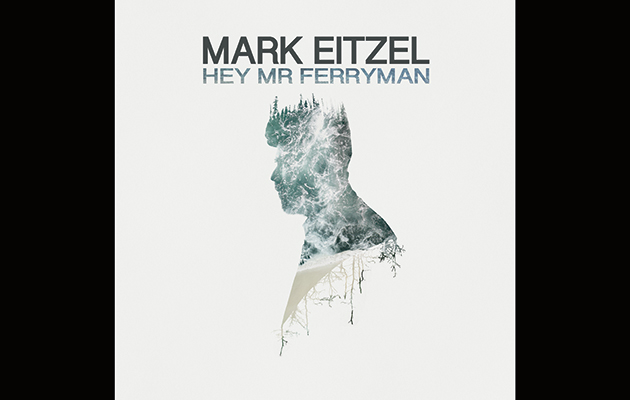 “This record is what it’s like to never know what the fuck happens next,” is Mark Eitzel’s parting shot in our recent interview about his new album. It’s a psychological state that Eitzel’s often used as a starting point for his songs: his forensic eye toward the workaday reality of living with and through love, and his understanding of the unpredictability of the interpersonal, has Eitzel as one of our most curious writers, documenting the confusion of the human condition with rare candour.

Hey Mr Ferryman was written during a complicated time for Eitzel: as he notes in our Q&A, he was shuttling between cities for much of the past few years; the songs themselves were initially recorded with Eitzel’s two bands (one in California, one in the UK), but they “needed some care and attention and so nothing really gelled,” he recalls. After connecting with producer Bernard Butler, they initially considered a simple acoustic album – “mostly because it was all we could afford.” But Butler’s perfectionist streak won out, and he took it upon himself to arrange and re-build the album, the end result, Eitzel marvels, being “the record I wanted to make all along – but simply didn’t think I could.”

Butler is an interesting choice of collaborator: a gifted producer, writer and musician, if there’s any risk in getting him on board, it’s an occasional tendency toward the mannered, the overly polite. But he can also dress songs in remarkably sympathetic settings, and so it is with Hey Mr Ferryman; he knows when to lay it on thick, as with the opening “The Last Ten Years”, a wonderfully droll performance from Eitzel gilded into a ’70s car radio classic by Butler, but he also knows when to pull back and let Eitzel’s voice and guitar do the bulk of the work.

Indeed, it’s those acoustic performances, gently flecked with female backing vocals, keyboard arrangements, and clacking drum machines, that are the core of Hey Mr Ferryman. “Nothing And Everything” is Eitzel at his observational, unflinching best, an evening’s tale of the chill of a fraught relationship, where “night falls like a chain”, where dependence becomes liability, the story eventually panning out to show us a tableau of narcissistic inter-relations. Eitzel’s performance here is chillingly gentle, while Tanya Mellotte’s backing vocals suspend the song in amber.

The following “An Angel’s Wing Brushed The Penny Slots” is similarly unsettling in its frankness, though much of the charm of Eitzel’s writing here is in his canny eye for minutiae, with the meeting of the song’s protagonists made all too human by the off-hand observation, “I tried to rise to her, but the carpet I caught”. Elsewhere, Eitzel turns his gaze to that most puzzling of social gatherings, the band on tour, and “The Road” is as devastating in its bluntness as it is sympathetic in its capture of the group’s character.

Opening with a scenario that’ll be familiar to anyone who’s toured – “We’re on a drive that’s never over/To play for a barman and his hateful brother” – Eitzel teases out the strange, strained suspension of reality that occurs when a group hits the road. The song’s drawn from “watching a touring band play for four people at a bar in Denton TX a few years ago,” Eitzel recalls. “It wasn’t my kind of music but they played their guts out anyway. You really have to love a touring band. You spend 23 hours trying to make one hour where time doesn’t matter.”

‘Time doesn’t matter’ – that’s a good summary of the state that Eitzel often seems to be aiming for in his songs. The gentle melancholy of the closing “Sleep From My Eyes”, a love song from someone in a coma, is another case in point, though here the script flips, and time matters all too much. Either way, the beautifully rendered character portraits of Hey Mr Ferryman, shaped into gorgeous studies of sympathy by Bernard Butler’s production, are compelling in their starkness, their raw, unchecked humour, and their kindness toward people who, as Eitzel says, are looking for “something that will lead them to light and safety”.

Q&A
MARK EITZEL
I remember reading somewhere that the follow-up to Don’t Be A Stranger was going to be called I Am Not A Serious Person. Obviously that’s changed…
Well yeah – I am not what you would call a serious person. Every time I take myself too seriously it ends bad – though I know recent events in the world make such frivolity annoying… My history is a bit of a burden and a lot of the writing I do now is to set up the karma so there is only goodness happening and no sour grapes.

From what I’ve read, these songs were written during a time of personal upheaval – moving a lot, travelling, performing…
I can’t complain – I had to fix up my house to rent to make some money as I am fairly unhireable at this point. So then I’m driving back and forth between LA and SF trying to keep a relationship with my partner – and so now instead of doing the job most musicians do, which is selling beer, I’m scraping paint and washing walls.

What connects the characters that populate Hey Mr Ferryman?
Ha – I have absolutely no clue. Maybe they are people who spend their time hoping that they will find a way out of the endless dark of the cave. You know? Like in the movies: Suddenly there is the sound of ‘rescuers calling out’. Or the hopeful scent of ‘fresh air’. Something that will lead them to light and safety… I’m right there with them. I’m on their side.
INTERVIEW: JON DALE