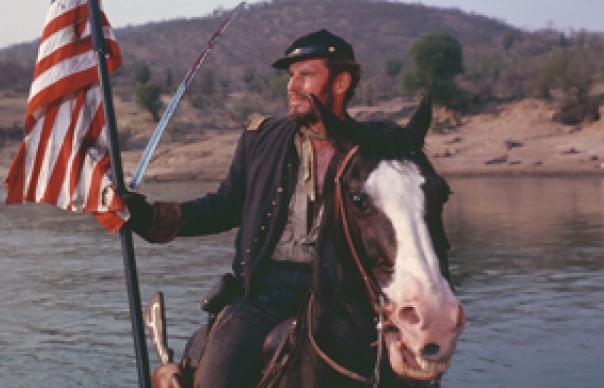 “Tell me, who will you send against me now..?” These are the words of Sierra Charriba, leader of a band of murderous Apache warriors, during the opening minutes of Sam Peckinpah‘s Civil War epic Major Dundee. But they could just as easily come from the mouth of Peckinpah himself. During the filming of Major Dundee, the director will find himself besieged by studio execs, battle budget cuts, face a mutinous cast and crew and have a sabre drawn on him by his leading man, Charlton Heston. And this is before the film is taken away from him, cut without his approval, has a score commissioned he detests and finally released to almost universal critical disdain and box-office failure.

It’s the kind of conflict that Peckinpah encountered repeatedly throughout his career. But here in 1963, Peckinpah was making his big budget picture debut – $4.5m as opposed to the $800,000 allocated for his previous film, Ride The High Country – and for the first time the intransigent, adversarial director got bloodied fighting to get his vision on screen. That he failed has led Major Dundee to be hailed as something of a lost masterpiece; like The Magnificent Ambersons, a classic example of an auteur’s vision compromised by the interfering hands of a studio.

This expanded Cut, originally released on the festival circuit in 2005, boosts the film’s running time from 123 to 136 minutes, arguably just too far short of Peckinpah’s original 156 minute version to be able to fully judge whether the film’s shortcomings can be attributed to the studio or the director himself.

If Peckinpah was driven by his own obsessions and demons, then the same is true of Major Amos Charles Dundee. A Union officer, he’s transferred in 1864 to command Fort Benlin, a PoW camp in Texas, as disciplinary action for fighting “his own war at Gettysberg”. Appalled by a massacre of ranchers and soldiers at the hands of Charriba’s men, Dundee pursues the Apache into Mexico, ostensibly to rescue children they’ve kidnapped. So he recruits from the camp prisoners a posse of “thieves, renegades, deserters, gentlemen of the South”, including Captain Ben Tyreen, an old friend from West Point turned Confederate rebel, and his grisly band of Southern trash (Warren Oates, Ben Johnson, LQ Jones and John Davis Chandler). Armed with 48 Henry rifles, 5,000 rounds of ammunition and a baby Howitzer, and rounded out by Samuel Potts, a one-armed Indian scout (James Coburn), Dundee leads his men out into the wilderness, across the Rio Grande and into some kind of hell.

The first hour of so, as Dundee assembles his posse, is brilliantly gripping, Peckinpah layering in the inter-personal dynamics of his characters, setting up conflicts to come – particularly between Dundee and Tyreen, which gives the film its emotional focus. As with Gil Westrum and Steve Judd in … High Country, or Pike Bishop and Deke Thornton in The Wild Bunch, Dundee and Tyreen represent opposite sides of the same character.

Dundee is the square-jawed, solid if rather dull leader; Tyreen a charismatic, moustachio’d rake. As the chase into the Mexico begins to take its toll, and Dundee’s grip on his command falters, Tyreen begins to assert his own authority, the roles of the two men almost reversed.
The second hour, as the men drift through a series of digressionary encounters, is much looser. Some of these sequences – particularly the scene where Warren Oates’ is tried for desertion – are fantastic on their own terms. But a lengthy interlude in a Mexican town, to essay in a love-triangle between Dundee, Tyreen and Senta Berger’s widow Teresa, undermines the film’s pacing.

The problem seems to be that Peckinpah didn’t have a finished script. Originally from future Dirty Harry writer Jules Fink, the screenplay was then rewritten by Peckinpah and Oscar Saul. Once filming began, Peckinpah and Saul – along with Heston and Harris – continued rewrites as they went, and the film just unravels. This wouldn’t be the last time Peckinpah found himself improvising pages of script on set, but at this early point in his movie career he doesn’t really have the skills to pull it off.

Heston, for his part, might not be the greatest choice for a Peckinpah movie. If you think of the great Peckinpah leads – William Holden, Coburn, Oates, Steve McQueen, Randolph Scott, Joel McRae – they all bring a worn, down-at-heel quality that chimes with the elegiac tone of the movies. But Heston – a huge box office draw in 1965 – manoeuvres convincingly between blue-eyed hero and broken, Ahab-like obsessive.
There is enough here to partly qualify the film’s status. As a response to John Ford’s Cavalry movies, it’s brilliant and bold. Peckinpah inverts Ford’s idea that disparate characters could be united through a common goal; here, they bicker and fight, tension palpable throughout.

The widescreen cinematography of Mexico is lush and striking, and the supporting cast of Peckinpah regulars are excellent. And the final scene, as the remnants of Dundee’s army disappears off into the dust and heat of the desert, feels richly symbolic, no comfortable return to civilisation here, these men perhaps no longer certain of what civilisation now even is.
After the disaster of Dundee, Peckinpah wouldn’t make another movie until 1969. You can argue that everything he learned getting burned on Major Dundee he then turned to his advantage on The Wild Bunch – his first, unassailable masterpiece.

EXTRAS: 4* Great, informative commentaries from Peckinpah historians, as well as a short but hugely enjoyable doc in which the grizzled old survivors of the shoot (Coburn, Armstrong, Jones, Berger) recount the film’s grim back story. There’s also cut scenes and the option to watch the film with either the original score in place or a new one, commissioned for this restoration project.