Madness – The Liberty Of Norton Folgate 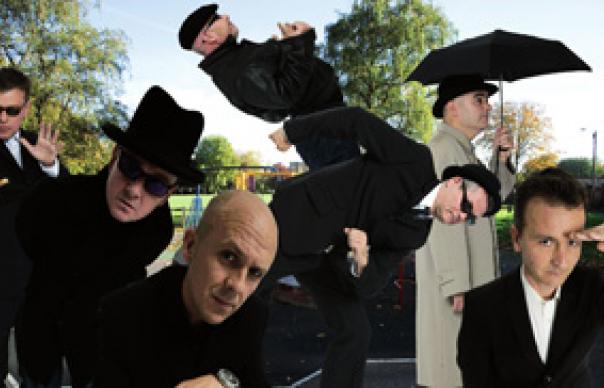 As the Specials reunion – reunion, my copious arse – gets more publicity, one can only hope that this far more interesting 2-Tone-related event will get more coverage. Because Madness not only keep reforming (with all their old members, including their best songwriter), they also release new records with original songs on them. And now, in 2009, at a point in their history when you’d confidently expect them to be creeping about the gaff in elderly slippers looking for their reading glasses, Madness have instead made a really good album. Ambitious, tuneful, exciting, wise, and with a finale that kicks them up a level into an undreamed-of musical dimension.

Over the years, Madness have had quite a few false-ish starts. There was The Madness, a very odd semi-reunion album. There was Suggs’ skaraoke solo album, there was the Dangermen collection… all target-missers on various levels. But The Liberty Of Norton Folgate – a title which makes sense in context but is otherwise unlikely to be jamming up the ringtone sites – is Madness in both their pomp and their prime.

Like most grabs for reheated glory, it sounds like their entire career in one go. There are echoes of melancholy stompers like “The Sun And The Rain”; there’s the rocksteady, bass-heavy (lots of bass on this album!) “Forever Young”, which is a slightly less-grey cousin of “Grey Day”. Any number of brilliant Madness character sketches are recalled in the splendid “Idiot Child” (which also has the spectral quality of the post-Mike Barson Mad Not Mad). But none of these stylistic revisits are retreads. “Everything” is infused with some of the best melodies of the band’s career, and everything is enthused, too. The tiredness of Keep Moving and Mad Not Mad has been replaced with an older, but fresher, sound. Songs like “Forever Young” and “Sugar And Spice” sound like singles, and should be. Everything seems to gel – the arrangements are the best ever, the production is thoughtful and smart, and the influences melded perfectly (we all know that Madness were more than the sum of Ian Dury and The Kinks, but we all chose to ignore the huge, conspicuous chunks of Motown and The Beatles also in there).

And there’s a new layer to Madness, as well. Previous efforts suffered because the band seemed unkeen to leave their comfort zone. Every musical territory that Madness had ever visited was revisited again and again, with diminishing returns (by the time Suggs got round to covering “I’m Only Sleeping”, the template was starting to look like tracing paper). But this time round, things are different. “Idiot Child” may be a short sharp character sketch, but it’s more barbed and less cosy than before. “Africa” is Madness’ most extraordinary lyric in which for once they stop banging on about London (on an album obsessed with the capital to the extent it contains a song called “We Are London”) and write a song about, amazingly, leaving the capital and going to Africa in a dream. It’s a lyrical fantasia slightly related to Michael Nesmith’s “Rio” and unlike anything else in the Madness jukebox.

What else? Well, there’s “Clerkenwell Polka”, which is a spookier cousin of “Waiting For The Ghost Train” and contains the best and possibly first use of the word “rectilinear” in a song. There’s “NW5”, as good an entry point single to this album as anything. And – oh yeah! – there’s “The Liberty Of Norton Folgate” itself. Which gets its own paragraph.

There’s a lot to say about “The Liberty Of Norton Folgate”. For a start, it’s 10 minutes long, which is unusual for a tune by Britain’s Official Greatest Singles Band. It’s a song simultaneously influenced by Ian Dury, Peter Ackroyd, Bollywood, Charles Dickens, Kurt Weill, John Barry, and, so far as I can tell, Muffin The Mule. It is in some ways The Pogues doing “Good Vibrations” and in others Oliver! performed by Prince Buster. Best of all, for a band who began their career in skinhead controversy while writing great songs about miscegenation, it’s a song that takes their obsession with London, the city of nations, to its logical conclusion, being a historical and musical tribute to a brilliant mixed-up mongrel culture. “In the beginning was the fear of the immigrant,”they chant, implying that such fears are for the weak of mind and chin. It’s a song that only Madness could write, and it is quite mad, a great argument against racism that makes you proud to be British, and a fantastic conclusion to a very, very good album.

Why a concept album?

We’d just done the Dangermen album of ska and reggae covers to reinvigorate ourselves, reminding us why we wanted to make music in the first place. So we wanted to follow it with something really dense, something with more depth.

Aren’t all Madness songs about London?

Yes! I suppose we wanted to explore that even deeper. Me and Chas [Carl Smyth, aka Chas Smash] are fascinated by the psychogeography thing explored by Peter Ackroyd, Ian Sinclair and Robert Elms. All the tracks are interlinked by the fact that we live in a complicated city of never-ending stories and never-ending change, something that’s an endless source of inspiration for us.

How do the band tend to write?

We all write separately; we bring our ideas into rehearsals and try them out. If enough people like them, they get recorded. This time was slightly different. We wanted to clear out all the songs people had stored up, so we recorded everything, which is why the collectors’ edition of the album has about two dozen tracks!